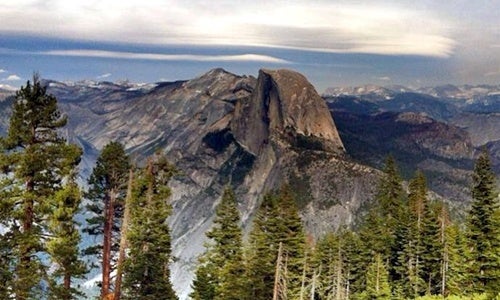 Half Dome in Yosemite National Park is breathtaking just to look at. Don’t believe me? Take naturalist and Sierra Club co-founder John Muir’s word for it, who was reportedly the ninth person to climb it. He described Half Dome as “the most beautiful and most sublime of all the wonderful Yosemite rocks.” I especially love that Muir refers to Half Dome and its surrounding massive granite peaks as “wonderful Yosemite rocks.”

Yosemite is one of the most popular parks in the country and Half Dome one of its most popular hikes. The granite crest known as Half Dome towers 4,737 feet above the valley floor (for a total elevation of about 8,800 feet). It’s the park’s most iconic feature. For the longest time, its summit was deemed “perfectly inaccessible.” Then, in 1875 a man by the name of George G. Anderson made it to the top by drilling and placing iron eyebolts into the granite. By 1919, the park had installed cables on the last 400 feet, so that climbers could pull themselves up the incredibly steep grade of smooth granite to reach the top.

Today, thousands of people summit the granite peak every year, but park rangers warn, it’s not for the out of shape, the faint of heart or for those with a fear of heights. The 16.4-mile round-trip hike can take 10-11 hours or more as you gain nearly 5,000 feet in elevation over the course of the hike.

The most famous—or infamous—part of the hike is the cables and with good reason. “Since 1919, relatively few people have fallen and died on the cables,” the National Park Service says. I think that is supposed to sound encouraging. Of course, “injuries are not uncommon for those acting irresponsibly,” the park service cautions. In fact, the park has to “assist” (read: rescue) hundreds of people on the trail every year. So before beginning the hike, it is imperative that you read up and watch this short video from the park service:

https://www.youtube.com/watch?v=l_D5zouojSY
will hardly be more conquered, now that man is added to her list of visitors.