Why Has Wave Power Remained Decades Behind Other Renewables? 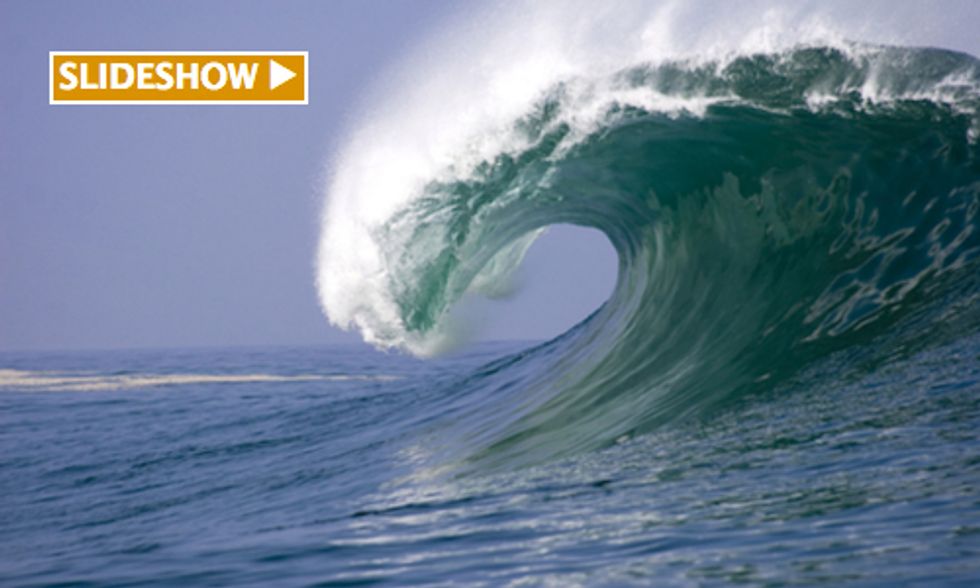 It’s not difficult to imagine what wind energy looks like—by this point we have all seen the towering turbines dotting the landscape. The same goes for solar power and the panels that are spreading across rooftops worldwide. But there is another form of renewable energy, available in huge quantities, that doesn’t really call to mind anything at all: what does wave power technology look like?

Wind and solar power have taken off in the past decade or two, as costs have come down rapidly and threats from climate change have made clear the need to transition away from fossil fuels. Meanwhile, numerous studies have concluded that wave power—and to a lesser extent, tidal power—could contribute massive amounts to the overall energy picture. But while the industry has made halting progress, experts agree that it remains decades behind other forms of renewables, with large amounts of money and research required for it to even begin to catch up.

No commercial-scale wave power operations now exist, although a small-scale installation did operate off the coast of Portugal in 2008 and 2009. In February, U.S. corporate giant Lockheed Martin announced a joint venture to create the world’s biggest wave energy project, a 62.5-megawatt installation slated for the coast of Australia that would produce enough power for 10,000 homes. Scotland, surrounded by the rough waters of the Atlantic and the North Sea, has become a hotbed of wave-energy research and development, with the government last year approving a 40-megawatt wave energy installation in the Shetland Islands.

But a central challenge has proven to be the complexity of harnessing wave power, which has led to a host of designs, including writhing snake-like attenuators, bobbing buoys, even devices mounted discreetly on the ocean floor that work by exploiting differences in pressure as a wave passes by. Some devices generate the electricity on the spot and transmit it via undersea cables to shore, while others pass the mechanical energy of the wave along to land before turning it into electrical energy. Which of these drastically divergent concepts might emerge as a winner is far from clear.

“We may not have even invented the best device yet,” said Robert Thresher, a research fellow at the National Renewable Energy Laboratory.

From a technical point of view, operating in the ocean is far more difficult than on land; building offshore wind installations, for example, tends to be significantly more expensive than constructing wind farms onshore. Saltwater is a hostile environment for devices, and the waves themselves offer a challenge for energy harvesting as they not only roll past a device but also bob up and down or converge from all sides in confused seas. This provides enticing opportunities for energy capture, but a challenge for optimum design.

“I’d like to be optimistic, but I don’t think realistically I can be,” said George Hagerman, a research associate in the Virginia Tech University’s Advanced Research Institute and a contributor to the U.S. Department of Energy’s assessment of wave energy’s potential. “You’ve got all those cost issues of working in the ocean that offshore wind illustrates, and then you’ve got [an energy] conversion technology that really no one seems to have settled on a design that is robust, reliable and efficient. With wind, you’re harnessing the energy as a function of the speed of the wind. In wave energy, you’ve not only got the height of the wave, but you’ve got the period of the wave, so it becomes a more complicated problem.”

A recurring theme among wave power experts is that wave energy is where wind energy was three decades ago. At that time, engineers had not settled on the optimal design for wind turbines, but decades of ensuing research have resulted in highly sophisticated turbine designs. With wave power, some research occurred after the Arab oil embargo of the 1970s, but since then government and commercial research and development into wave power has paled compared to wind and solar energy.

As with any energy source, the fundamental roadblock toward more widespread deployment is cost. So far, the wave energy field is filled with small companies picking off small amounts of government funding where they can. It will likely require the participation of some large companies, such as GE or Siemens (both major manufacturers of wind turbines) before wave power really gets rolling, according to numerous experts. Those companies may be waiting for the technology to sort itself out before investing, a common dilemma in any nascent field.

In spite of the challenges inherent to the medium, the industry is progressing, albeit slowly. There are a few small wave farms and pilot projects in the water, including Pelamis Wave Power’s first-ever wave farm off the coast of Northern Portugal. That company has a few megawatt-scale wave farms planned, while others, like Ocean Power Technologies, continue to deploy test devices to improve buoy-based technology.

Australian company Carnegie Wave plans to commission a “commercial scale” installation near Perth later this year, using a fully submerged device that uses wave power to pump water to shore for conversion to electricity. And there are signs that big-company buy-in is starting, as evidenced by Lockheed Martin’s Australia project, which will use a buoy technology that generates electricity from the rising and falling of waves.

Another company, M3 Wave, plans to install a new device just off the Oregon coast this summer. M3 will be using a pressure-based device, sitting out of sight on the ocean floor. As a wave passes over it, air inside the device is pushed by pressure changes from one chamber to another, spinning a turbine to generate electricity.

So far, projects producing only a handful of megawatts have actually made it into the water, but experts say the industry needn’t settle on one device before substantial progress occurs.

“I wouldn’t be surprised if what we eventually find is there will be a device that we use in deeper water, and a device that we use nearer the shore,” said Belinda Batten, a professor at Oregon State University and the director of the Northwest National Marine Renewable Energy Center.

The process to refine those technologies is ongoing. The European Marine Energy Centre in Scotland’s Orkney Islands allows companies to connect their devices to existing infrastructure and cabling to test their electricity-generating capabilities and identify problems. Batten said her center based at Oregon State is in the permitting and approval process for a counterpart testing center that will enable companies to connect to the existing electricity grid for testing purposes.

The location of those two testing sites is no accident, as they are situated in maritime regions known for energetic waves. The Pacific Northwest and Alaska will likely have a monopoly on the U.S.’s first generation of wave projects, while in Europe the United Kingdom—Scotland in particular—is focusing heavily on wave energy development. The UK government says the country could potentially get as much as 75 percent of its energy needs from the waves and tides combined; the U.S. Department of Energy, meanwhile, estimates that wave power in the U.S. could generate as much 1,170 terawatt-hours per year, which is equivalent to more than one quarter of all U.S. electricity consumption.

Thresher of the National Renewable Energy Laboratory says that wave power’s first markets may well be in remote places like Alaska, where energy is expensive because of reliance on costly imported fuels like diesel, “there has been an interest in some of the island communities.”

With the industry starting to develop larger projects and continuing to test myriad devices in search of the best designs, does that mean wave power could finally be on its way, just as wind was 25 years ago?

Jason Busch, executive director of the Oregon Wave Energy Trust—a non-profit group dedicated to helping advance the industry—said that there are too many variables, such as the price of natural gas or eventual passage of a carbon tax, to apply the experience of wind or solar power to a different technology and time period.

“In my opinion the biggest issue is the failure to price carbon,” said Busch. “As long as we refuse to internalize the cost of greenhouse gases, then we’re playing on an unlevel playing field.”

In spite of the hurdles, though, he thinks that steady technical progress will lead to substantial amounts of grid-connected wave power by 2035. “In the course of 10 years we have gone from having zero wave energy technologies that are even remotely viable to having several in the water, and on the cusp of commercial viability,” Busch said. “We’re making some really good progress.”

Why Windmills Are Beautiful