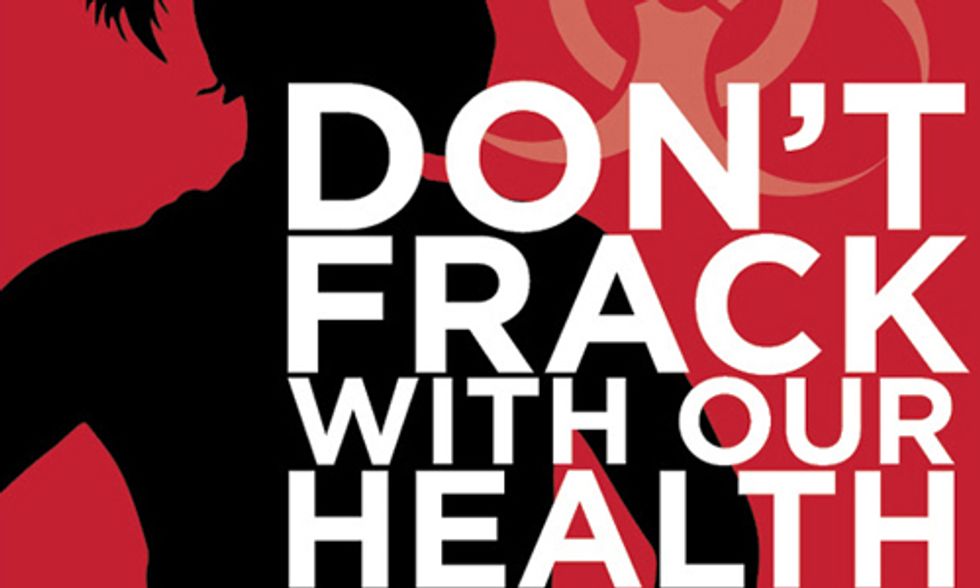 Most people consider fracking a climate change issue. They are able to make the connection between a potent greenhouse gas like methane and its impact on warming the planet. But methane emission leaks at well sites are only one of the many concerns of the fracking boom. The toxic process also uses more than 700 chemicals, many linked to breast cancer. Fracking threatens the necessities of life, and just as this process drives climate change, it also increases our risk for breast cancer.

So what else does climate change have in common with breast cancer? Both are a growing threat that demands urgent action to prevent irreversible harm.

Nearly five years ago, the President's Cancer Panel declared they were “particularly concerned to find that the true burden of environmentally induced cancer has been grossly underestimated [and] … the American people—even before they are born—are bombarded continually with myriad combinations of these dangerous exposures." Yet, since this powerful declaration, our federal legislators have failed to act to protect public health.

In truth, we currently live in a toxic soup of chemicals. In the absence of a federally adopted, nationwide, state-enforced precautionary approach to health and environmental safety, how are we to protect ourselves and future generations from breast cancer? Our chemical regulations fail us and need to be strengthened in so many areas: from consumer products to industrial chemicals to medical products to food packaging, to name only a few. And one of the most important and growing pathways of exposure to cancer-linked chemicals that endangers our health and increases our risk of breast cancer is fracking.

Fracking is an extreme form of energy extraction that involves mixing tens of thousands of gallons of chemicals with millions of gallons of water and pumping the mixture underground at extreme pressure to break up rock formations and release oil or natural gas. Despite the dangers inherent in fracking, the industry-friendly Energy Policy Act of 2005 exempts oil and gas industries from more than a dozen environmental regulations, including the federal Clean Water Act, Safe Drinking Water Act and Clean Air Act. What is widely called the Halliburton Loophole to the Safe Drinking Water Act (pushed by Vice President—and former Halliburton CEO—Dick Cheney) allows oil and gas drillers to inject known hazardous materials directly into or adjacent to underground water supplies.

Fracking is growing at a scale and pace that threatens the health of everyone in the U.S. In our highly interconnected world, it is not only the millions of families that live in communities affected by fracking whose health is on the line; we are all at risk of toxic exposures as water is pumped from fracked areas to cities, as fracking in agricultural regions contaminates food put on kitchen tables across the country, and as air carries contaminants in unpredictable and untraceable ways. Unlimited and poorly regulated fracking wells threaten the basic necessities of life: our food, water and air.

Across the U.S., millions of women and families are already at risk for exposure to these chemicals and the health harms that come with them. Tens of thousands of fracking wells have been drilled since 2000—placing more than 15 million people within a mile of a fracking well. And that number will only continue to grow steadily if the oil and gas industry has its way. Environment America calculates that there are 82,000 wells in 17 states that have been fracked since 2005. They further calculate that in just 14 states, 22,326 new fracking wells were drilled in 2012.

The oil and gas industry attempts to guard the specific combination of chemicals used in fracking under “trade secrets." But environmental and health activists have been working hard to research and reveal just what, exactly, industry is pumping into the Earth and, by extension, our bodies.

In just the last two years, scientists and researchers published the available science on the environmental and health impacts of fracking, exposing the more than 700 chemicals—including carcinogens, neurotoxins, hormone disruptors, plastics, heavy metals and radioactive agents—that are commonly used in the process of drilling and fracking for oil and gas. Many of these chemicals are associated with breast cancer, as well as a variety of other health harms. Twenty-five percent of the chemicals used in fracking have been linked to cancer. More than a third disrupts the endocrine system. And up to 50 percent of fracking chemicals cause nervous, immune and cardiovascular system problems.

Let's consider just one of those chemicals used in the fracking process: benzene, a known carcinogen that has been linked to male breast cancer through occupational exposure. Benzene has been found in the urine of workers exposed to fracking fluid despite the fact that as early as 1948, the American Petroleum Institute's own toxicological review stated that "it is generally considered that the only absolutely safe concentration for benzene is zero" and the U.S. Environmental Protection Agency has set a maximum contaminant level goal of zero for benzene in drinking water.

Many of the hazardous chemicals used in fracking are not biodegradable, which means that once pumped underground and released into the environment, fracking produces a toxic and radioactive legacy that threatens our health for years to come. There is no safe option for dealing with fracking wastewater. Fracked wells, as well as injection wells used to dispose of toxic wastewater, have already contaminated drinking water and threatened the safety of countless drinking water aquifers. In fall 2014, the Center for Biological Diversity revealed that the oil industry had illegally dumped almost three billion gallons wastewater into central California aquifers that supply drinking water and farming irrigation. And earlier this month the worst fracking wastewater spill in North Dakota since the boom began in the state, leaked 3 million gallons into the river.

While we may not know everything about the long-term health impacts of spills like these, we certainly know enough to take action on fracking. Last month the Governor of New York did just that, announcing a ban on fracking shortly after the release of a long-anticipated study of the health effects of fracking. The acting state health commissioner, Dr. Howard A. Zucker, presented the study at a cabinet meeting, saying there are “significant public health risks" from air pollution and water contamination associated with fracking. Dr. Zucker urged caution, saying he would not want his family to live in a community where fracking takes place: “We cannot afford to make a mistake. The potential risks are too great."

The reality is: fracking harms the climate and our bodies. We cannot separate one from the other. For women's health activists and environmental activists alike, the time to act is now. We must act together to protect the health of communities affected already and those whose health will be threatened in the future. We need to proactively protect public health before further harm occurs. Before the ban in New York, Environment America estimated there could be as many as 60,000 wells drilled! Today, thanks to the commitment, perseverance and bold action of thousands of activists, New Yorkers have faced down the powerful oil and gas industry. This year, Californians and other activists across the country are poised to do the same.

The organization that I lead, Breast Cancer Action, was founded 25 years ago by women living with—and dying from—breast cancer who wanted to end the complacency of scientists, government agencies and the general public in the face of an emerging epidemic. They cared about prevention and refused to sit idly by and watch as more and more women got sick. Today, we carry on their fearless and truth-telling legacy.