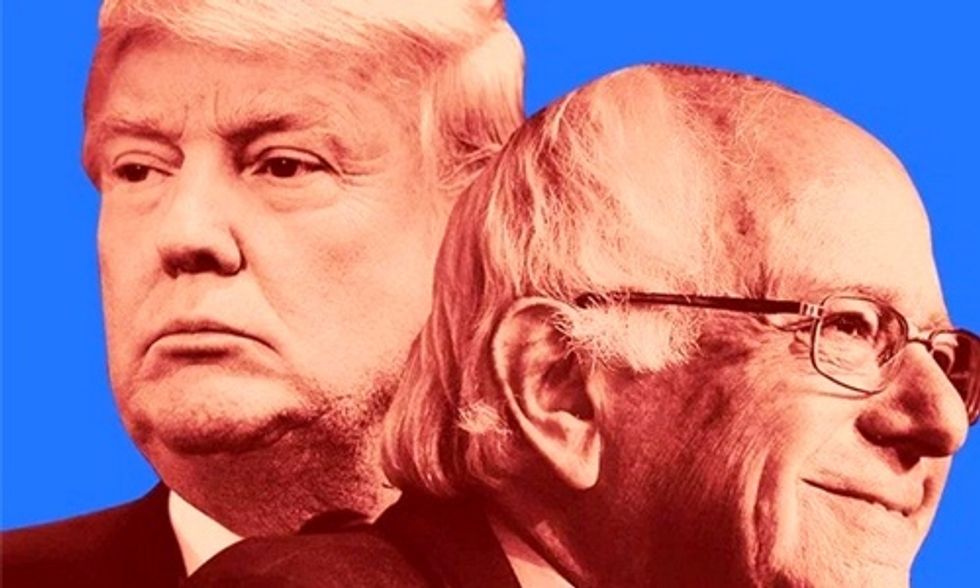 Lost in the tumult of covering the 2016 presidential campaign trail is a striking reality that’s largely gone unacknowledged: the grassroots level brewing revolt of working- and middle-class Americans who feel left behind by the system.

Sanders and Trump are highlighting the failure of status-quo politics to address concerns that hit home with non-wealthy Americans. Photo credit: Fivethirtyeight.com

This discontent and its insecurities are fueling the surges of Bernie Sanders and Donald Trump, who each offer different responses to it, and whose candidacies haven’t faded despite predictions from party insiders and many pundits. It’s also underscored by the fact that the GOP’s two leading candidates—Trump and Ben Carson—have never held elective office, unlike the senators and governors trailing them.

Sanders and Trump, in very different ways, are highlighting the failure of status-quo politics to address concerns that hit home with non-wealthy Americans. But while Sanders is running a campaign based on a positive vision of government doing more for these Americans, Trump is striking a chord with people who feel other slices of society need to be put down so they can rise up.

Despite the stark differences in these visions, both suggest that political business as usual cannot hold. That sentiment also accounts for the lackluster appeal of candidates who are pandering to wealthy elites, such as Jeb Bush.

But if we want to understand what’s driving much of the energy on the ground in the 2016 race so far—as opposed to the wealth-driven super PACs—it is the realization by many working- and middle-class people that the U.S. government does not have their back.

Sanders, as many people who have watched his rise know, speaks to a range of Americans who feel left behind or abandoned in an age of deepening economic inequality and predatory corporate greed. His agenda is built on reviving government’s ability to help people with basics and live with more dignity, whether it’s ending college debt, accessing health care, fortifying retirements or other necessities. The wealthy can afford to pay higher taxes for a fairer, more balanced, more secure society, Sanders says, while acknowledging that this won’t come to pass unless an unprecedented number of Americans vote and oust the right wingers in Congress who just want to serve the rich and ignore everyone else.

Sanders’ message is not just echoing in the country’s lefty epicenters and midwestern university towns. As the Washington Spectator’s Rick Perlstein has written, recently covering Sanders in Texas and Indiana, his message is also appealing to red staters who are used to voting for conservatives—if they vote at all. He begins his latest report by talking about a construction sales executive he sat next to on the plane to Texas to cover a Sanders rally who praised Sanders’ “middle of the road” messages, adding, “I like what I’ve heard.”

In some respects, that is the same response depicted by the Dallas Morning News when it interviewed attendees of Sanders’ first big Texas rally this summer, such as a 36-year-old man who has never before voted for president. “The biggest reason why I support Bernie is that he knows the economy is rigged in favor of the 1 percent," he said. "No one else is really saying that, and it’s a huge problem.”

Moving on with the Sanders campaign to Indiana’s rust belt, Perlstein noticed that many supporters—white and black—also were motivated for the first time in many years to get involved. At a house party on a night when the campaign was hoping for 30,000 participants nationwide and 100,000 came out, Perlstein reported how many people introduced themselves by saying they played by the rules but couldn’t get a decent job and were drowning in education-related debt. That prompted standing ovations and the recognition that they weren’t alone. The next day in another northwestern Indiana town, he met an African-American retiree who just opened a storefront campaign office for Sanders and praised him for following up with Black Lives Matter activists—after floundering at the NetRoots Nation conference. “I’m okay with that,” she said. “He’s learning.”

It's rare that presidential campaigns spark such grassroots excitement, and when they do, they're often dismissed by the cynics in the media. “Something is happening here,” Perlstein wrote, "something that reminds us that our existing models for predicting winners and losers in politics need always be subject to revision.”

That something is people whose voices and concerns have been downplayed by the governing class finding candidates who are speaking for them—but not all of these candidates' rhetorics and remedies are as positive as Sanders’.

On the GOP side of the aisle, the biggest mystery is not why the establishment’s presumed frontrunner, Jeb Bush, is failing to excite. Nor it is why other high-ranking elected officials, like governors and senators, have failed to rise to the top, despite presenting themselves as reincarnations of Ronald Reagan, defenders of the right to get rich and keep it all or ideological purists. The biggest mystery is why Trump has maintained his lead for months with positions no establishment candidate would take in public.

Why Is the World Obsessed With Donald Trump? http://t.co/PTHDduaCfn @Greenpeace @HuffPostGreen
— EcoWatch (@EcoWatch)1440727295.0

The best explanation is there’s a major slice of America’s working- and middle-class who look at the political system and don’t just feel left out, but are angry that others—people both poorer and richer than they are—seem to be beneficiaries of a government that’s forgotten them. Hence, Trump’s anti-immigrant bigotry, his smears of the politically correct, his male-defending misogyny and vision of being a strongman president—ie, taking down competitors at home and abroad—appeals to those who feel overlooked and aggrieved.

That’s the conclusion of an insightful article by John B. Judis, a senior writer for the National Journal, who makes a convincing case that Trump supporters are not very different than the alienated middle Americans who backed George Wallace for president in 1968, and backed Ross Perot and Pat Buchanan in 1992 (and 1996 and 2000). In 1992, Perot got 19 percent of the November vote, effectively electing Bill Clinton.

Judis’ analysis is thorough, compelling and altogether troubling. It shows that there is a very dark streak running through the electorate, as indeed has been the case through much of American history. He starts by citing an overlooked 1976 book by Donald Warren, a sociologist from Michigan’s Oakland University, The Radical Center: Middle Americans and the Politics of Alienation, which identifies this slice of the electorate that, according to Warren, contains one-quarter of the nation’s voters.

These working- and middle-class people, Warren said, see “government favoring the rich and the poor simultaneously,” are suspicious of big business, are not college educated but favor government programs that give them stability—such as Medicare, Social Security and possibly national health insurance—and hold “very conservative positions on poverty and race.”

“If these voters are beginning to sound familiar, they should: Warren’s MARs [Middle American Radicals] of the 1970s are the Donald Trump supporters of today," Judis writes. "Since at least the late 1960s, these voters have periodically coalesced to become a force in presidential politics, just as they did this past summer... Over the years, some of their issues have changed—illegal immigration has replaced explicitly racist appeals—and many of them now have junior college degrees and are as likely to hold white-collar jobs. But the basic MARS worldview that Warren has outlined has remained surprisingly intact.”

What makes Judis’ explanation noteworthy is that it goes beyond the mainstream media line, summarized in this piece on the New York Times’ “Upshot” page, that Trump’s appeal is only based on his strong personality or because he’s a political outsider.

“What has truly sustained Trump thus far is he does, in fact, articulate a coherent set of ideological positions, even if those positions are not exactly conservative or liberal,” Judis writes. “The key to figuring out the Trump phenomenon—why it arose now and where it might be headed next—lies in understanding this worldview.”

Americans are correct to compare Trump’s demagoguery on behalf of “a silent majority” to the worst of the George Wallace-Pat Buchanan tradition of grievance politics, from attacking immigrants for taking away jobs, to smearing Obamacare because the insurance industry keeps getting rich, to encouraging government to excise the purported cancer in our midst.

“The essential worldview of these Middle American Radicals was captured in a 1993 post-election survey by [Democratic pollster] Stanley Greenberg, which found that Perot supporters were more likely than Clinton’s or Bush’s to believe that ‘it’s the middle class, not the poor who really get a raw deal today’ and that ‘people who work for a living and don’t make a lot of noise never seem to get a break,’” Judis wrote, saying there “has been no similar polling of Trump’s supporters.”

Where the 2016 Race Goes From Here

Judis' last observation is that beating the nationalist drum,which Trump is also doing, is the final hallmark of this dark campaign legacy. His most recent attack on Jeb Bush—blasting his brother George W. Bush for the 9/11 attacks in New York City—are a perfect example of that thread. Just how Trump's bullying nationalism will play out in a race where Sanders has said Americans ought to look to Scandinavia for the level of governmental supports that could be possible in America is anyone’s guess. But that particular thread of nationalism can get very ugly, and surely there’s more of it to come.

If Judis is correct that Trump has revived some of the nastiest reflexes in the American electorate, from the same slice of overlooked America that Sanders is engaging with his more hopeful appeals, then it is time to take a hard look at what status quo-defending candidates, their political parties and mainstream media pundits are saying.

It sure looks like the Americans who are paying attention to the political system and are getting involved with 2016’s candidates are deeply concerned, frustrated and, on the political right, angry and vengeful. That’s a dicey mix. At least Sanders is offering specifics about what he would do and how he'd get results, not just taunts, boasts and attitude. But Trump’s backers may not care much for specifics, as long as someone else is fingered, blamed and attacked on their behalf.