Why Doesn't the USDA Test for Residues on Food From Monsanto's 'Cancer Causing' Glyphosate? 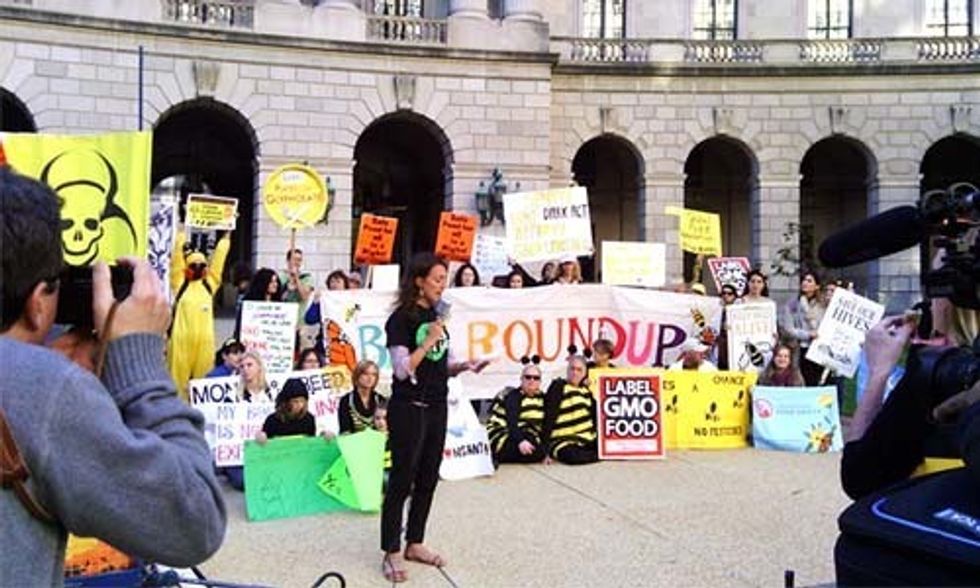 When microbiologist Bruce Hemming was hired two years ago to test breast milk samples for residues of the key ingredient in the popular weed-killer Roundup, Hemming at first scoffed at the possibility. Hemming, the founder of St. Louis-based Microbe Inotech Laboratories, knew that the herbicidal ingredient called glyphosate was not supposed to accumulate in the human body. Hemming, who previously worked as a scientist for Roundup maker Monsanto Co., now operates a commercial testing facility located just a few miles from Monsanto's headquarters.

But Hemming said his lab's testing did find residues of glyphosate in the samples of breast milk he received from a small group of mothers who were worried that traces of the world's most popular herbicide might be invading their bodies. Food companies, consumer groups, academics and others have also solicited testing for glyphosate residues, fueled by fears that prevalent use of the pesticide on genetically engineered food crops may be contributing to health problems as people eat foods containing glyphosate residues.

Those fears have been growing, stoked by some scientific studies that have shown health concerns tied to glyphosate, as well as data from the U.S. Department of Interior finding glyphosate in water and air samples. The concern surged last year after the World Health Organization's cancer research unit said it had found enough scientific evidence to classify glyphosate as a probable human carcinogen.

Consumers groups have been calling on the U.S. government to test foods for glyphosate residues on behalf of the public, to try to determine what levels may be found and if those levels are dangerous. But so far those requests have fallen on deaf ears.

It would seem that would be an easy request to meet. After all, since 1991, the U.S. Department of Agriculture (USDA) has conducted a Pesticide Data Program that annually collects pesticide residue data for hundreds of pesticides. The testing looks for residues on a range of food products, including infant formula and other baby foods and also looks for residues in drinking water. The purpose of the program is to “assure consumers that the food they feed their families is safe," according to the USDA.

But while the USDA looks for residues of other herbicides, as well as fungicides and insecticides, the agency routinely does not test for glyphosate. It did one “special project" in 2011, testing 300 soybean samples for glyphosate and found that 271 of the samples had residues. The agency said all fell within the range deemed safe by the U.S. Environmental Protection Agency (EPA). The agency has said testing for glyphosate is “not a high priority."

In the latest annual Pesticide Data Program report—issued Jan. 11—once again, glyphosate data is absent. Testing was done to look for residues of more than 400 different herbicides, insecticides and other pesticides on food products. But no tests reported for glyphosate.

The USDA says it is too expensive to test for glyphosate residues; much costlier than tests for the other 400+ pesticides that are part of the analysis, the agency says. The agency also echoes the position held by Monsanto that glyphosate is safe enough that trace amounts in food are nothing to worry about. (This begs the question: But how do we know there are only trace amounts, without the testing?) And all that World Health Organization talk of cancer connections to glyphosate? Monsanto hired its own experts who concluded that finding was wrong.

The EPA, which sets the tolerance levels allowed for glyphosate and other pesticides has said glyphosate is safe at certain defined tolerance levels and has actually raised those tolerance levels in recent years. At the same time, the EPA has been conducting a multi-year re-evaluation of glyphosate, its usage and impacts. The agency was due to release a risk assessment last year. In fact, EPA's Chief Pesticide Regulator Jim Jones said in May that assessment was nearly completed then and should be released by July 2015. But this week an EPA spokeswoman said the report would likely be made public “sometime later this year."

The government pegged glyphosate use in the U.S. at nearly 300 million pounds for 2013, the most recent year the estimate is available. That was up from less than 20 million pounds in 1992. The rise in usage parallels the rise of crops genetically engineered to be glyphosate-tolerant, meaning farmers can spray the herbicide directly on their fields and kill weeds but not their crops. Many key food crops are sprayed directly with glyphosate, including corn, soybeans, sugar beets, canola and even in some cases, wheat, though wheat has not been genetically engineered as glyphosate-tolerant.

“It is a scandal that USDA tests for hundreds of pesticide residues but not glyphosate, which is among the most widely used chemicals on our food crops," Gary Ruskin, co-director of U.S. Right to Know, a nonprofit consumer group, said. “Consumers want to know how much glyphosate is in our food. Why won't the USDA tell us? “

In a statement that accompanied the annual pesticide residue report, the EPA's Jones lauded the data as an “important part of … our work to evaluate pesticide exposure from residues in food" and said that “EPA is committed to a rigorous, science-based and transparent regulatory program for pesticides that continues to protect people's health and the environment."

But given the health concerns raised by the World Health Organization and the rising use of this pesticide, consumers deserve better. It seems reasonable for the USDA to respect consumer concerns and make glyphosate residue testing a priority.

We Have a Right to Know What's in Our Food!