Why Do American Taxpayers Give Away Minerals to Mining Companies? 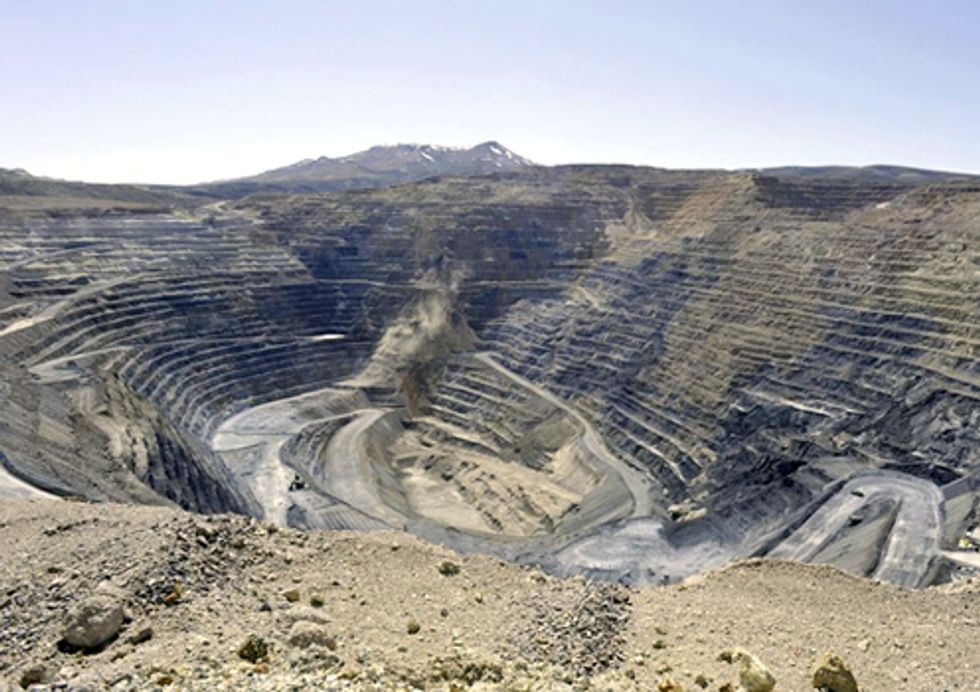 This photo shows the Newmont Gold Quarry pit in Battle Mountain, Nev. While the U.S. government reaps billions of dollars in royalties each year from fossil fuels extracted from federal public lands and waters, it does not collect any royalties from gold, uranium or other metals mined from the same lands, Congressional auditors reported on Dec. 12. A Government Accountability Office report found that the federal government doesn’t even know how much these so-called “hard rock” mines produce from federal public lands in 12 Western states where most of the mining occurs. (AP Photo/The Reno Gazette-Journal, David B. Parker, file)

As Washington struggles to address the country’s growing deficit, a new report released today finds that the federal government has lost its grip on finances in a different way.

An analysis from the Government Accountability Office reveals that the government does not keep track of the amount and value of hardrock minerals—gold, silver, copper, etc.—mined on public lands that are being given away to private companies.

Because the government does not collect royalties on these minerals, it claims there is no reason to keep track of this information:

We found that federal agencies generally do not collect data from hardrock mine operators on the amount and value of hardrock minerals extracted from federal lands because there is no federal royalty that would necessitate doing so.

The reason that companies mining hardrock minerals on public lands are exempt from paying royalties is a law passed almost 150 years ago, called the General Mining Act of 1872. To this day, it is the law of the land when it comes to extracting hardrock minerals from the federal estate. This means that mining companies are able to extract taxpayer-owned copper, gold, silver and other minerals for nearly nothing in exchange.

Other resources extracted from public lands, like oil, coal and natural gas, are subject to royalties of some sort, generally in the realm of 8-12.5 percent. And while the federal government receives payments for drilling and mining in other ways like bonus bids and rents, royalties provide a significant amount of money to taxpayers: GAO found that the total royalties received on coal, oil and natural gas totaled $11.4 billion in 2011.

Although data on how many hardrock minerals are being extracted from public lands isn’t tracked, there have been some attempts at estimating what this loss to taxpayers looks like. Using data from 1993, the Department of the Interior approximated that more than $6 billion worth of hardrock minerals was extracted from federal lands in fiscal year 2011.

Today’s report underscores the need for greater disclosure of what is extracted from public lands, while also reforming the 1872 mining law and requiring companies to pay a royalty on the minerals that they extract. Democratic members of the House Committee on Natural Resources pointed out that reforming the law could raise $300 million every year.

Reforming outdated policies like the 1872 mining law and subsidies for oil companies in order to help address the deficit are also important in the context of other extreme policies that have been proposed. For example, Rep. Rob Bishop (R-UT) and Rep. Steve Pearce (R-NM) recently called for selling off or trading public lands in order to reduce the deficit.

As Rep. Raul Grijalva, who requested the report along with Sen. Tom Udall (D-NM), put it:  “Everybody’s penny-pinching, and here’s a penny we haven’t pinched.”

Jessica is the manager of research and outreach for the Public Lands Project at the Center for American Progress Action Fund.