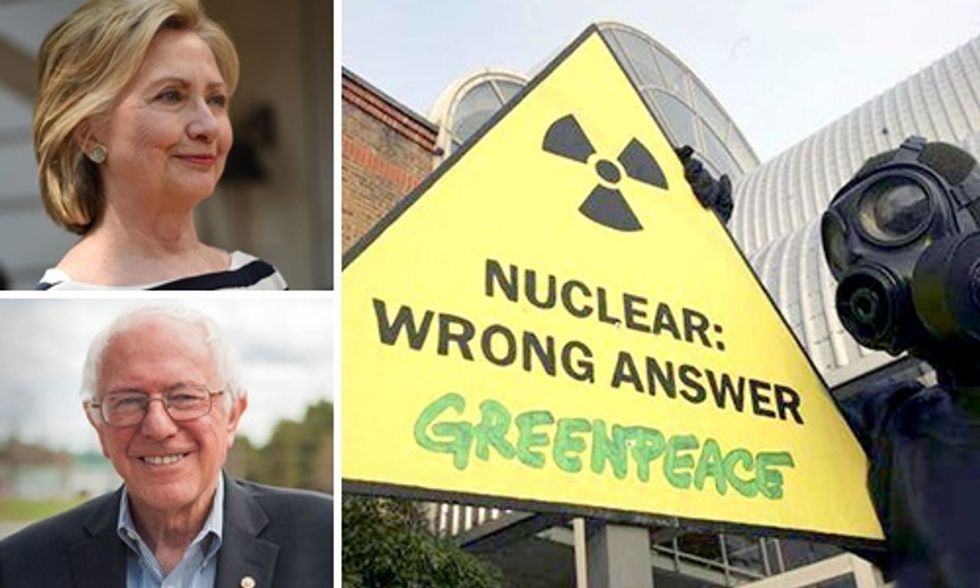 The few remaining construction projects in the U.S. and Europe are engineering and economic disasters.

Presidential candidates Hillary Clinton and Bernie Sanders may address this in broad terms.

But as a nation we must now focus on the 99 dying U.S. reactors that threaten us all every day. In terms of our national survival, this is what Sanders and Clinton really must discuss.

In the biggest picture, Fukushima and Germany's transition to renewables have escalated the energy debate to a whole new level.

What we really need now are focused, persistent campaigns to bring these rogue nukes down before they blow up. Every one of them has the power to kill millions, irradiate entire sections of the globe and bankrupt us all.

Fukushima still dumps huge quantities of radioactive water into the Pacific every day. The site is out of control. The myth that U.S.-made reactors can’t explode has been buried forever. Three melted cores are still missing. Especially among young children, health impacts in the region are devastating. Two dozen General Electric clones of Fukushima Unit 1 now operate in the U.S. They all need to shut.

Meanwhile the extreme success of Germany’s Solartopian Energiewende makes it clear the world can indeed run entirely on renewables. The central electric grid is no longer sustainable. All German nukes will be done by 2022. Germany’s great green community-based assault on King CONG (coal, oil, nukes and gas) is ahead of schedule and under budget. Clean energy prices are plummeting along with climate impacts.

Worldwide reactor construction has sunk into economic chaos. Russia, China, India and several smaller countries are still talking about building new reactors.  This is an issue of grave concern for all of us.

But the radioactive road signs bode badly for them all.

France’s Areva, once the industry flagship, is in shambles. Reactor projects in Finland and at Flamanville, France, are billions over budget and years behind schedule. So are the two each in South Carolina and Georgia, where the local economies stand to be devastated by gargantuan cost overruns. Detroit Edison wants to stick the people of Michigan with the enormous up-front costs of a proposed new construction fiasco at Fermi 3, which could bankrupt an already shaky state economy.

It will take years more of dedicated activism to make sure the lessons of these failed projects are understood everywhere.

But in the meantime, above all, we fear the 99 U.S. reactors that crumble as we speak:

1. The infamously lax Nuclear Regulatory Commission (NRC) warns that Pilgrim, south of Boston, can’t meet even the NRC’s absurdly loose safety standards. Entergy may shut it down rather than pay to fix it up. The two candidates should demand they do it now.

2. Indian Point Unit 2, near New York City, has been operating without a license. The Unit 3 permit expires in December. Both must shut immediately.

3. The shield building at Ohio’s Davis-Besse is literally crumbling. FirstEnergy wants Ohio’s Public Utilities Commission to hand it a $3 billion bailout. This may be the world’s most decrepit nuke. It should have shut a very long time ago.

4. Exelon is begging the Illinois legislature for massive bailouts at five money-losing, increasingly dangerous reactors. That should be denied.

5. Entergy’s FitzPatrick in New York is losing millions, as is nearby Ginna. Both must go.

6. California’s Diablo Canyon reactors sit atop an interconnected web of 12 known fault-lines. They are 45 miles from the San Andreas, less than half the distance of Fukushima from the seismic trench that destroyed it. They are in violation of state and federal water quality laws. They’re being propped up by a corrupt Public Utilities Commission. They need to close.

… and that’s just for starters.

Through the rest of this presidential campaign, we can expect the Democrats to broadly endorse a green-powered future, and question the sanity of nuke power.

Thanks to decades of hard campaigning by the global grassroots No Nukes movement, that’s no longer hard to do. Even Donald Trump has made rumblings about shutting Indian Point. Even Ohio’s Gov. John Kasich is posturing as a friend of renewables, an industry he’s done his best to decimate.

What we really need now are focused, persistent campaigns to bring these rogue nukes down before they blow up. Every one of them has the power to kill millions, irradiate entire sections of the globe and bankrupt us all.

In the big picture, Clinton and Sanders could start with a demand to remove the federal insurance that protects these radioactive relics from liability when the inevitable melt-downs arrive.

But they can help us most by addressing these dying nukes by name, and by joining us in court and on the barricades to get them buried before they kill again.