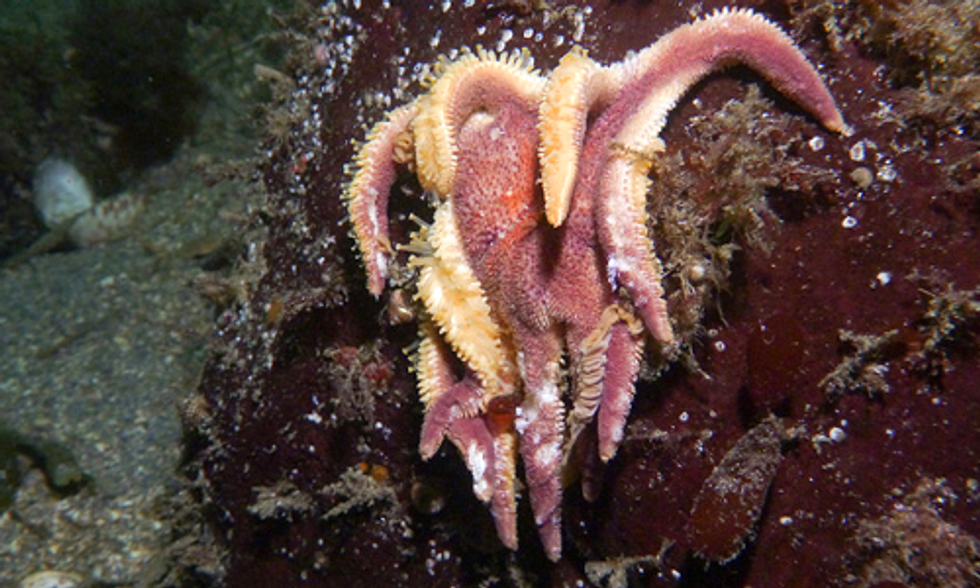 Starfish are losing arms, developing white lesions and disintegrating into piles of goo. Last summer, divers and scientists began reporting the fatal “melting” events up and down North America’s coasts—from British Columbia to southern California in the Pacific, and from New Jersey to Maine in the Atlantic. Though nobody knows what’s causing these die-offs, the plague does have a name: Seastar Wasting Syndrome.

A morning sun star (Solaster dawsoni) clings to a rock face off the British Columbian coast, as it decomposes. Photo credit: Kevin Grove

Outside of beach art, most people don’t think about starfish too often. These echinoderms don’t make for good eating, cuddly pets or cute YouTube videos. But I’m here to tell you that when it comes to tidal ecosystems, losing sea stars is a big deal.

You’ve heard of keystone species, right? The term refers to particular organisms that keep the relationships between the ecosystem’s other plants and animals functioning properly. Without them, ecosystems collapse—like an arch would without its center block. Well, as it so happens, when ecologist Robert T. Paine first coined the term back in 1969, he got the idea by messing around with a bunch of starfish.

Paine crawled along the tidal plains of Washington’s Tatoosh Island, pulling up all the ochre stars (Pisaster ochraceus) he could find and tossing them out into the ocean beyond his study area. He played this game of starfish Frisbee for three years, and discovered that without the seastars, his study area became so thick with mussels that little else could survive.

Ochres, mow down mussel beds like it’s closing time at Old Country Buffet. What was once a rich community of 28 species of animals and algae along Tatoosh Island, Paine turned into a mussel monoculture. And today, more of this mussel dominance could be on its way, since ochres are one of the 15 starfish species currently turning into mush.

Most of the approximately 1,900 starfish species that exist today are fearsome hunters. Sure, describing a slow-moving echinoderm with words typically reserved for sharks, tigers and komodo dragons seems a little odd. Then again, none of those killers can pry open prey and absorb its guts like an alien vacuum.

“Very few things eat sea stars,” says Pete Raimondi from U.C. Santa Cruz's Long Marine Lab, who helped set up a website for tracking incidences of wasting syndrome. “Many of the species we’re talking about are really top predators on the food chain.”

Another one of these predators coming down with the syndrome is the sunflower seastar (Pycnopodia)—a massive roving armada of arms. This enormous echinoderm can grow up to three feet in diameter and wield as many as 25 limbs. FYI: if you’re a snail or abalone who values its life, you better become familiar with a sunflower seastar’s signature scent.

“Pycnopodia emits such a distinctive odor in the water that animals literally move themselves out of the way to avoid it,” explains evolutionary biologist and taxonomist Christopher Mah. Clams, urchins, brittle stars and sand dollars all “move heaven and Earth” to avoid being destroyed by the sunflower’s Shiva-like arms. Some things you just have to see to believe:

Mah was among the first experts to start piecing together reports of starfish devastation. (His website, The Echinoblog, is easily the most entertaining assortment of echinoderm facts I’ve ever come across.) Mah worries that if the sunflower starfish succumbs to the wasting syndrome in large numbers, its absence will affect the entire food web.

“The thing that I kind of dread is that we’re seeing something that could be important but we’re not paying attention to it,” he says. As with Paine’s experiment, years could pass before scientists notice the consequences, but instead of mussel monocultures, Mah suspects a sunflower die-off would result in vast swaths of seafloor devoid of life. The wastelands he is referring to are known as “urchin barrens.”

Sunflower sea stars keeps sea urchin numbers in check, and without these starfish, urchins gnaw kelp plants from top to bottom. If too many of the spiny urchins gather at the base of a kelp stalk, they can chew right through the holdfast (or root), setting the whole plant adrift. The result is similar to clear-cutting a forest. The life forms that live among the canopy—fish, crabs, otters—disappear as well.

Raimondi and his colleagues are hoping to avoid such devastation through a wasting syndrome website and an interactive map where divers and scientists can submit data for review. He’s also working with a biological oceanographer from Cornell University named Ian Hewson to see if the die-offs in disparate places are related, and what might be triggering them. But it won’t be easy.

“When you look at viruses that infect bats, cows, or dogs, there’s been a history of people looking at them through the ages,” Hewson explains. “But with echinoderms, we know virtually nothing about what’s naturally living in them, let alone anything that could be causing the disease.”

The mediaster seems to be showing signs of the wasting disease, too. Photo credit: Jonathan Martin

To find more answers, Hewson and his team must first identify all the microbes living inside sea stars and then work backwards to figure out which of them might be causing the echinoderms to melt. The team already has some preliminary data and a flurry of new experiments taking place in the coming weeks. Hewson doesn’t want to name a villain until his tests are complete, but he said it may be that multiple viruses are to blame. “It’s just nobody’s actually looked,” he says.

If nothing else, the crisis is a reminder to all of us that even lowly, slow-mo sea creatures can have a big influence on the world around them. It’s time we give these keystone species a little more respect for being the lions and tigers of their domain—or perhaps a better comparison would be the wolf. The “sea star wolf” (a.k.a. the morning sun star) earned its nickname for how it hunts down other seastars. Even the massive sunflower would rather detach one of its own arms than tango with this star slayer.

And you thought starfish were boring.