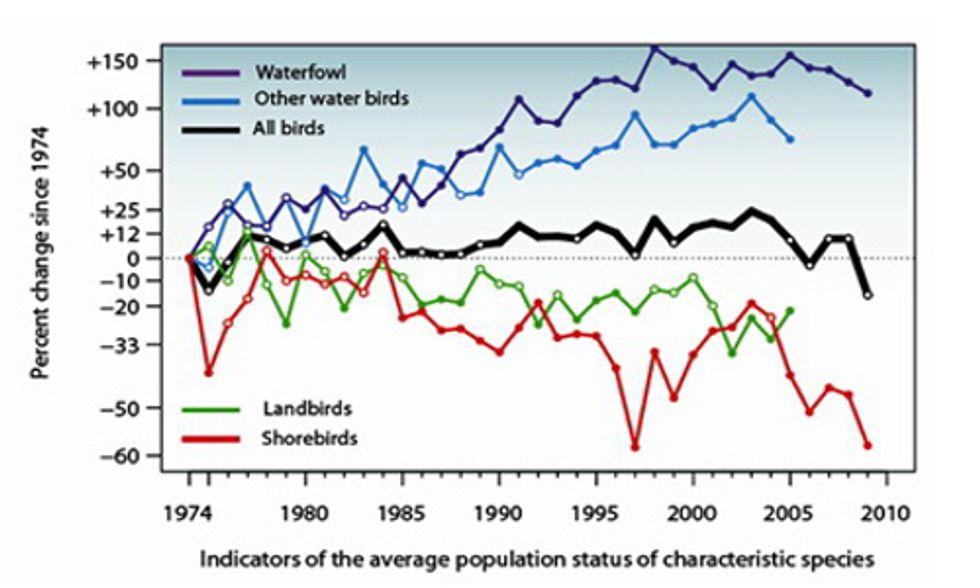 On Coats Island, in northern Hudson Bay, thick-billed murres—members of the auk family—have been under assault on several fronts in recent years. Polar bears, faced with a sharp decline in the sea ice from which they hunt ringed seals, have retreated to the island and are eating the murres’ eggs. As the sea ice disappears, the murres now have to fly farther and work harder to get food that they normally find along the ice edges. And as temperatures around Hudson Bay rise, mosquitoes are hatching earlier in the season. So many mosquitoes have swarmed on Coats Island in recent years that some of the nesting murres have perished from blood loss, according to biologist Anthony Gaston of Environment Canada, who has been studying the murre colonies on the island since 1984.

Gaston believes that the toll these changes are taking on long-lived murres and their chicks will inevitably lead to a sharp decline and ultimate collapse of the island’s 30,000 breeding pairs. "Maybe not in my lifetime, but it will happen," says Gaston, who will retire in March. "These and other seabirds are superbly adapted to the sea ice environment. Without that ice, and with polar bears and mosquitoes hitting them hard, the only future in the Arctic for them is to move north."

Across the Arctic, resident birds such as the murres are experiencing increasing stresses that affect their foraging patterns and reproductive success. Researchers say that the gyrfalcon, the peregrine falcon, the willow and rock ptarmigan, the long-tailed jaeger or skua, and Ross’s and ivory gulls are in decline, as are some other birds that fly north to nest in the Arctic. In many cases, the birds’ prey—from lemmings, to snowshoe hare, to cod in the southern reaches of the Arctic Ocean—are experiencing population declines and shifts in their reproductive cycles.

"There’s no doubt that something is happening," says Dave Mossop, a biologist at Yukon College who has been studying birds in the Yukon for more than 40 years. "Kestrels here are declining so fast, it’s scary. As many as 60 percent of the adult peregrines we have in the Yukon haven’t even bothered nesting in recent years. Our gyrfalcons are breeding much later, seem to be producing fewer young, and are declining in abundance."

Scientists are working hard to understand why these cycles are changing, but many suspect that climate change is at least partially responsible. With springtime in the Arctic advancing by two or three weeks, snowshoe hares may not be losing their white coats fast enough to make them less vulnerable to predation in spring. Higher temperatures may be having an impact on vegetation that is critical for some birds, and warmer and shorter winters are resulting in snowfall and icing events that may not be conducive to lemming, vole and other rodent reproduction.

Predators such as the peregrine, the gyrfalcon, the snowy owl and the Greenland long-tailed skua depend on peaks in these prey species to reproduce in numbers that will sustain their populations. For these birds, collapsing prey cycles are bad news. A team of Danish scientists, for example, recently documented how a collapse in collared lemming cycles at two sites in Greenland between 1998 and 2010 resulted in a 98 percent decline in the snowy owl population. They also documented a similar, albeit less drastic, decline in the population of long-tailed jaegers, part of the skua family.

Snowy owls are dependent on Arctic lemmings, whose populations are highly cyclical. Thousands of young snowy owls have headed south this winter in the biggest "irruption" of the species in southern Canada and the U.S. in decades. Photo credit: Bill Bouton

Mossop and others are convinced that this rush of protein that periodically flushes through the system during predator peaks is what drives these resident populations in the Arctic. "All Arctic creatures have to have sophisticated strategies in order to survive in this part of the world." he says. "Exploiting those peaks, I think, is part of the strategy."

According to Don Reid, a scientist for the Wildlife Conservation Society in the Yukon, early and deep snow provides the insulation that is necessary for lemmings to breed and produce enough young to account for the population peaks. Because snow conditions are declining or changing in some places in the Arctic, that insulation is being compromised, Reid says. Lemmings, as a result, cannot produce enough offspring to bounce back from the lows that follow heavy predation.

University of Alberta biologist Alastair Franke has unequivocal evidence of peregrine falcon nestlings starving to death on the west coast of Hudson Bay. But lack of food, he says, is not the main thing killing these birds. According to a recent study led by graduate student Alexandre Anctil of the University of Quebec, some regions of the Arctic are now experiencing more periods of heavy rain each summer when compared to the early 1980s. With their downy white coats insulating them against the snow and the cold, these chicks do just fine. When it rains heavily, however—as it has increasingly been doing along the west coast of Hudson Bay since 1980—up to a third of the peregrine chicks in the study area die of hypothermia as their wet feathers rapidly draw heat from their bodies. Some even drowned in their nests.

Anctil and Franke came to this conclusion by analyzing meteorological records dating back to 1980 and by placing nest boxes on cliffsides to provide shelter for some of the chicks. With the help of remote cameras, they discovered that sheltered chicks fared better than birds that were exposed to heavy rain events. All of this counters the good news for a species that has undergone a strong recovery after nearly being driven to extinction in the 1970s.

Acadia University biologist Mark Mallory has been watching this and other similar events unfold with concern for the fulmars, murres, black guillemots, and other year-round Arctic residents that he studies in the High Arctic. This past summer was an especially bad one for the birds Mallory studies. As happened with some regularity in the past, snow, ice, and cold conditions lingered for so long that the terns, gulls and jaegers at Nasaruvaalik Island didn’t even lay eggs. Mallory says that while the birds are adapted to deal with these occasional seasonal extremes, the overall warming trend is a real cause for concern. "What worries me is what’s happening in the southern parts of the Arctic," says Mallory. "If we see these ecosystem changes and rain events migrating north into the High Arctic, I don’t know how these birds are going to adapt."

Francis St. Pierre, examines a common eider off the northern coast of Ellesmere Island. Farther south, in western Hudson Bay, some common eider colonies have been hit hard by avian cholera in recent years. Found mainly in the south, avian cholera is beginning to spread into the Arctic as temperatures warm. Photo credit: Ed Struzik

For researchers, the problem in almost all cases is that there is a dearth of information about how Arctic birds and their prey are faring throughout the circumpolar world. The impact of climate change is often an indirect one, creating subtle mismatches between predator and prey that may be caused by changes in snow and vegetation, icing events, the arrival of an invasive species or the early melting of sea ice.

What’s more, climate change is not be the only reason some birds like the ivory gull are in trouble. For example, Mallory and colleague Grant Gilchrist of Environment Canada once thought that receding sea ice—which makes it increasingly difficult for these birds to forage for fish and marine invertebrates—was the main reason for the 80 percent decline that they documented in Canada’s ivory gull population since the 1980s. "Receding sea ice means that, just like bears having less time to hunt seals, there's less time for the gulls to follow bears and scavenge kills," says Mallory.

But now he and other scientists have evidence to suggest that high levels of mercury, which the gulls may be ingesting from foraging on seal carcasses left behind by polar bears, may also be a factor. "Mercury is something we think is a smoking gun," he says. "But because there are so few of the birds in Canada, it's tough to justify sampling to run experiments."

To get a clearer picture of what is happening in the Arctic, Mossop, Mallory and other scientists are attempting to set up international networks that can better track changes. Even with that, says Mallory, figuring out what is going on is still daunting.

"We have a very small population and few, widely distributed sampling sites (e.g. weather stations), so our baseline data is not too great," says Mallory. "Add to that the complex suite of threats that some of these species are facing simultaneously—climate change, contamination of food webs, alteration to migratory stopover sites and wintering habitats, competition with human fisheries for prey, industrial development in the Arctic, invasion of the Arctic by new parasites, diseases — and you can appreciate that trying to nail down a cause-and-effect explanation for what we are seeing is very tough."

A falcon nest in Greenland, with eggs ringed by the carcasses of dozens of lemmings. In some parts of Arctic regions, snow cover—which provides insulation that enables lemmings to raise their young—is in decline, which scientists say may be reducing the peaks of lemming cycles. That, in turn, is reducing populations of birds of prey such as snowy owls, falcons and long-tailed jaegers. Photo credit: Christine Blais-Soucy

Laval University scientist Gilles Gauthier—who has spent the last quarter century leading a team of scientists studying the fauna and flora on Bylot Island in the eastern Arctic—cautions his colleagues not to read too much into short-term trends in animal cycles. But Gauthier says that when change happens in a simple food web such as the Arctic, it can occur abruptly, whether from declines in prey abundance, the appearance of new competitors or diseases, or changes in vegetation.

"The eastern Arctic where I work is still relatively cold compared to what is happening in Fenno-Scandinavia and Alaska and the western Arctic of Canada," says Gauthier. "That may account for the fact that on Bylot Island we are not seeing the big changes that are occurring elsewhere. What we do know, though, is that the warming that is coming will greatly exceed anything we have seen so far. In order to understand how plants and animals can adapt to constraints brought on by rapid change, we need to better understand these linkages between different species."