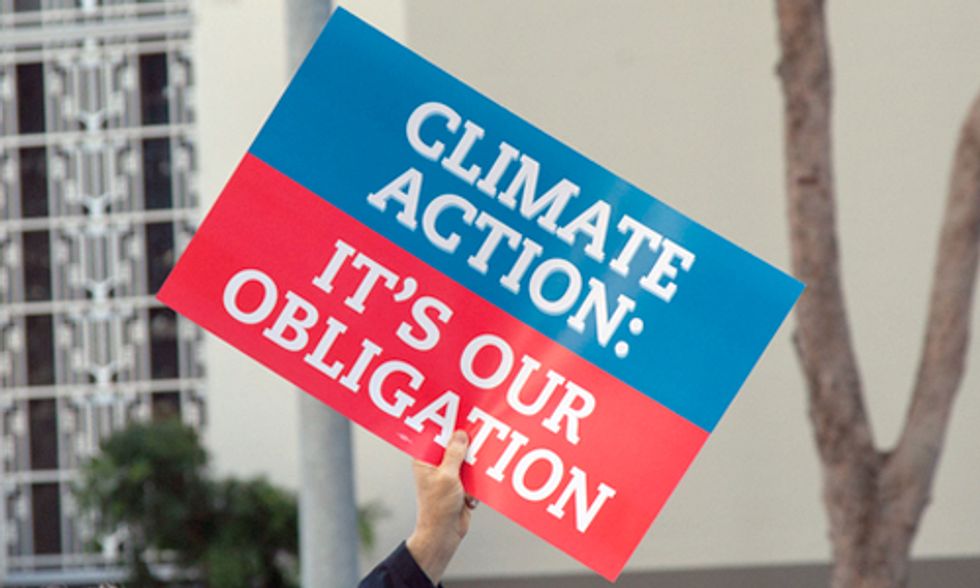 So, what does a major investment from Verizon Wireless and the melting of our polar ice caps have in common? A lot more than you may think. On Monday, America’s largest wireless provider announced that it will be making a $40 million investment in solar power at eight of its facilities across the U.S.

A report put out by the Citizens Climate Lobby shows that a $10 carbon tax would cut greenhouse gas emissions by around 28 percent of 2005 levels.
Photo credit: Shutterstock

According to a press release from Verizon, new solar installations at facilities in California, Maryland, Massachusetts, New Jersey and New York will nearly double the amount of energy that Verizon gets from solar power. Speaking about the $40 million investment, Verizon’s chief sustainability officer James Gowen told Bloomberg that, “Solar is a proven technology. It didn’t hurt that the technology is getting better and prices are coming down.”Last year, Verizon announced a similar $100 million investment in solar power and fuel cell technologies. These types of investments in clean and green forms of renewable energy from major U.S. corporations couldn’t come sooner. That’s because new research suggests that climate change and global warming are happening a lot faster than we first thought.According to new data from a European space probe, our planet’s two largest ice sheets—in Greenland and Antarctica—are melting at unprecedented speeds. The CryoSat-2 space probe has discovered that the ice sheets in Greenland and Antarctica are losing a stunning 120 cubic miles of ice each year. That’s a lot of ice that's going from being frozen ice up on land into being river water flowing into the rising oceans. But more importantly, the rate of sea ice loss from Greenland and Antarctica has more than doubled since 2009, which shows just how fast the processes of global warming and climate change have become. Speaking about the new and alarming data, Mark Drinkwater, mission scientist for the European Space Agency’s CryoSat mission, said that, “These results offer a critical new perspective on the recent impact of climate change on large ice sheets. This is particularly evident in parts of the Antarctic peninsula, where some of the more remarkable features add testimony on the impact of sustained peninsula warming at rates several times the global average.”And, it’s not just the sea ice in Greenland and Antarctica that’s melting at astonishing rates. Arctic sea ice is melting at unprecedented rates too. In fact, as Gaius Publius pointed out over at America Blog, just about every reputable projection on the loss of Arctic sea ice has been wrong.The lack of sea ice cover in the Arctic that we’re seeing today wasn’t supposed to happen for 20+ more years according to 13 of the most accurate models. With more and more of our planet’s ice cover melting away at unprecedented rates, the question becomes: "Have we reached a tipping point?"Have we reached the point where we can no longer hope to slow down or even stop the processes of climate change and global warming, and where do we have to prepare for the ongoing and worsening sea level rises on our coastlines?The fact is, despite this new and alarming data from the CryoSat-2 probe, we still don’t if we’ve passed a tipping point or not. So, with that being the case, we need to slow down climate change and global warming, to protect our planet's ability to support human life. One of those actions that we can take today is to put a carbon tax in place. Putting a price on carbon encourages less fossil fuel extraction and a rapid move to clean and green energy. With even a modest carbon tax—that doesn't even end the subsidies to the big oil, coal, and gas companies - fossil fuels instantly become more expensive than renewables like wind and solar.A report put out by the Citizens Climate Lobby shows that a $10 carbon tax would cut greenhouse gas emissions by around 28 percent of 2005 levels. That’s 11 percent more than the cut proposed by the U.S. Environmental Protection Agency in the Clean Power Plan it announced back in June.In our documentary Carbon, the first part of a four part series on climate change by Leonardo DiCaprio and yours truly that was released last week, some of the world’s leading climatologists and scientists talk about the importance of a carbon tax. They make it clear that, if we want to save our planet and the human race from the greatest threat we've ever faced, a carbon tax is absolutely essential. It’s that simple.