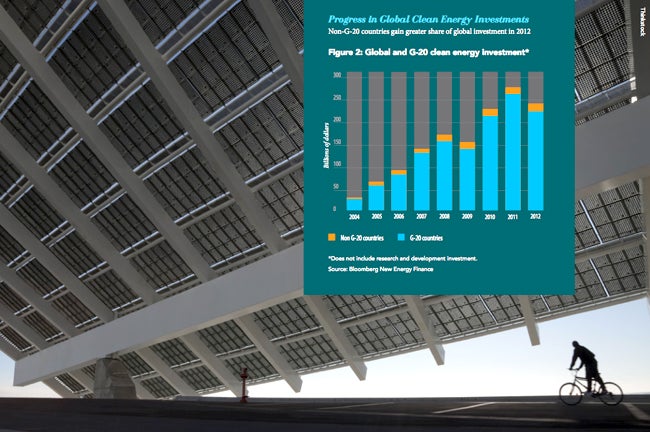 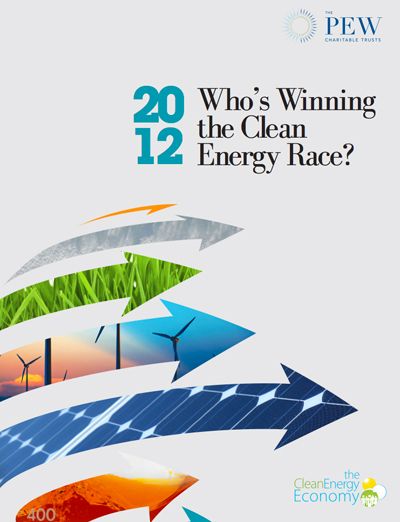 The global clean energy sector is undergoing geographic and technological shifts as new markets emerge and renewable capacity grows, according to research released by The Pew Charitable Trusts. The sector demonstrated resilience in 2012, registering a record 88 gigawatts (GW), of additional generating capacity, even though investment levels declined 11 percent, to $269 billion, from 2011. Among the Group of 20 nations, China reclaimed the top spot from the U.S., attracting $65.1 billion, a 20 percent increase over 2011 and 30 percent of the total for the G-20.

The 11 percent decline in clean energy investments compared to 2011 levels was due in part to curtailed incentive programs in a number of countries, among them Spain, Italy and Germany. Elsewhere, continuing support for clean energy led to record levels of investment in a number of nations, including China and South Africa. Renewable energy installations grew by more than 11 percent to 88 GW, which reflected price reductions in wind, solar and other technologies.

“Clean energy trends demonstrate the ongoing resilience of this emerging sector in the global economy,” says Phyllis Cuttino, director of Pew’s clean energy program. “For the third straight year, investment reached more than $200 billion, and 2012 ended with five times that of 2004. Every year, new markets open up and more renewable power is deployed around the world. Even though government policies have been uneven and unpredictable in certain markets, the economic, environmental, and security benefits of clean technologies are driving the sector forward. Countries that prioritize policy are positioning themselves for increased private investment, as well as manufacturing and job-creation opportunities.”

Reflecting the trend toward emerging markets, clean energy investment is shifting from the West to the East. The Asia and Oceania region has grown nine straight years and in 2012 became the leading regional destination for clean energy investment, growing 16 percent to $101 billion and accounting for 42 percent of the global total. In contrast, policy uncertainty in Europe and the U.S. resulted in investment declines of 22 percent in the Europe, Middle East and Africa region, and 31 percent in the Americas.

Clean energy investment is also shifting across technologies. For the second year in a row, solar technologies attracted more financing than any other technology by a wide margin: $126 billion was invested in the subsector in 2012, or 58 percent of the G-20 total. China, Europe and the U.S. were top markets for solar investment. 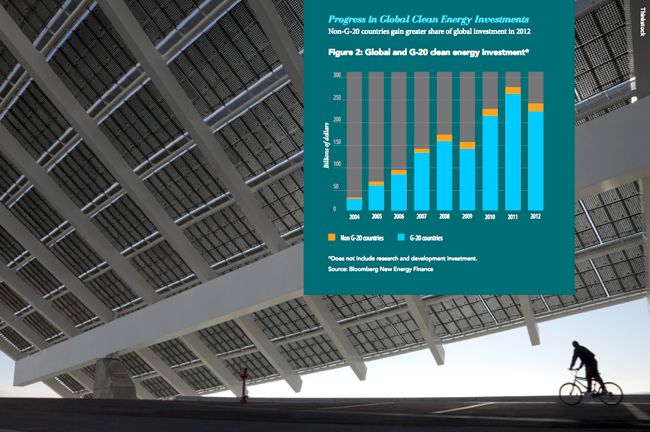 Wind energy, which has garnered the majority of clean energy investment for most of the last decade, saw 14 percent less investment across the G-20, but it still attracted $72.7 billion. Among G-20 countries, wind energy investment was down 14 percent, with declines in historically large markets such as China, Germany, India and Brazil. But the United Kingdom and U.S. saw gains in wind energy investment, with a substantial increase in the U.S. to a record 13.6 GW of wind power generating capacity, spurred by uncertainty about the potential expiration of the production tax credit. At year-end, Congress renewed this important tax incentive for the U.S. wind industry through 2013.

Continued reductions in the price of wind and solar helped boost worldwide installed clean energy capacity to 648 GW. A record 48.6 GW of wind and 31 GW of solar generating capacity were deployed in 2012. Installed solar capacity of 104 GW is four times the level in place in 2009. In the U.S., renewable energy sources accounted for 49 percent of new generating capacity in 2012, while in Europe more than 70 percent of new capacity was renewable.

In the global clean energy race, China established itself as the leader in attracting investment in wind, solar and other renewables. China added 23 GW of clean energy generating capacity, bringing its total to 152 GW, the most of any nation.

The U.S. fell to No. 2 as investment in the sector declined 37 percent, to $35.6 billion. In third place, Germany curtailed incentives and saw investment decline 27 percent, to $22.8 billion. Still, 7.5 GW of solar generating capacity were added in Germany—the most of any G-20 country. 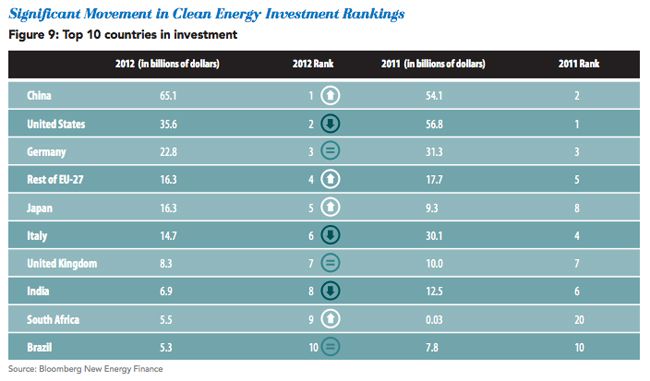 Japan reemerged as a top destination for clean energy investment as national efforts to develop alternatives to nuclear energy gained momentum after the Fukushima Dai-ichi nuclear disaster in 2011. Clean energy investment in the nation increased 75 percent, to $16.3 billion, almost all in the solar sector, which added more than 2 GW of generating capacity. These projects propelled Japan into the No. 5 spot in investment in 2012, with the 27 countries of the European Union that are not separate members of the G-20 at No. 4.