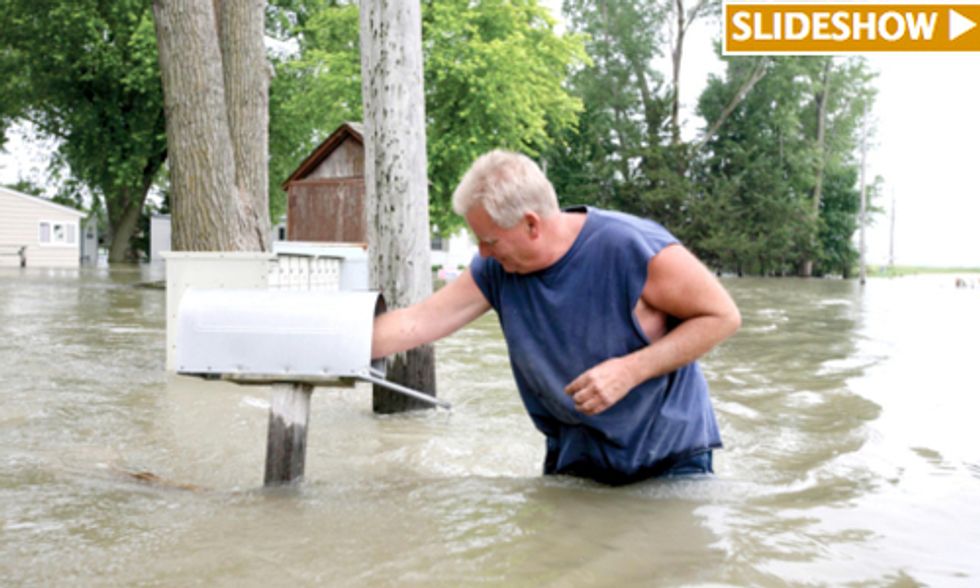 While it remains unclear how many definitive reports it will take to convince everybody that climate change is a real, not-so-distant threat to our planet, the one released by the White House Tuesday morning will go a long way toward that cause.

Unlike other reports released in the past month, the National Climate Assessment (NCA) focuses solely on the U.S. and the droughts, downpours and more that will be boosted by manmade climate impacts. The report was prepared by 300 scientists managed by the U.S. Global Change Research Program, a collaboration of 13 federal departments and agencies.

"Evidence for climate change abounds, from the top of the atmosphere to the depths of the oceans," reads the report's overview. "Scientists and engineers from around the world have meticulously collected this evidence, using satellites and networks of weather balloons, thermometers, buoys and other observing systems. Evidence of climate change is also visible in the observed and measured changes in location and behavior of species and functioning of ecosystems.

"Taken together, this evidence tells an unambiguous story: the planet is warming, and over the last half century, this warming has been driven primarily by human activity."

The report is full of graphics and interactive maps that let people explore the biggest vulnerabilities to waters, forests, agriculture, public health and more in 10 regions: Northeast, Northwest, Southeast, Midwest, Alaska, Hawaii, Great Plains, Rural Communities, Southwest and the coasts. For instance, an interactive map on the Midwest allows one to view the estimated amount of days that per year in each state that will fall under three different categories: Days above 95 degrees, cooling-degree days and heavy precipitation.

"It begins to take the climate discussion down to a regional level, so it breaks the country apart, anticipates what's going to happen in each region," John Podesta, a counselor to President Barack Obama, told CNN. "That kind of information will help communities plan."

For many environmental groups, it represents a confirmation of what they have been preaching for years.

“We’ve known for decades that global warming threatens our future," Julian Boggs of Environment America said. "This report shows how our families and communities are being harmed today.

“Today’s report explains the science behind what farmers, first responders, flood insurers, victims of hurricane Sandy and other major storms have seen firsthand: global warming is increasing the frequency of extreme weather events, contributing to sea level rise, and increasing drought, and no region of the country is off the hook."

Michael Brune, executive director of the Sierra Club, says the report reveals the toll climate change has already taken on people throughout the country.

“We applaud the Obama Administration for listening to these alarm bells, and urge them to continue to take critical, common-sense steps, including the first-ever limits on carbon pollution from power plants," Brune said in a statement. "We don't just have an obligation to future generations to take action now—we will seize an enormous opportunity as we do. By leaving dirty fossil fuels in the ground and continuing the transition to clean energy solutions like wind and solar, we can create good American jobs and power homes and businesses nationwide without polluting our air, water or climate.”

The groups also believe the report is a positive omen for the carbon limits from power plants that the Environmental Protection Agency is scheduled to propose next month.

“Our leading scientists send a stark message: Climate change is already seriously disrupting our lives, hurting our health and damaging our economy,” said Frances Beinecke, president of the Natural Resources Defense Council. “If we don’t slam the brakes on the carbon pollution driving climate change, we’re dooming ourselves and our children to more intense heat waves, destructive floods and storms and surging sea levels.

"Fortunately, the Obama Administration is taking action—by setting standards for cleaner more efficient cars and, within weeks, by issuing the first-ever nationwide limits on carbon pollution from our existing power plants," Beinecke said. "Cleaning up the air is a win-win: It can create thousands of jobs, expand energy efficiency and lower electric bills while improving public health. That’s the climate legacy we can, and must, leave future generations.”