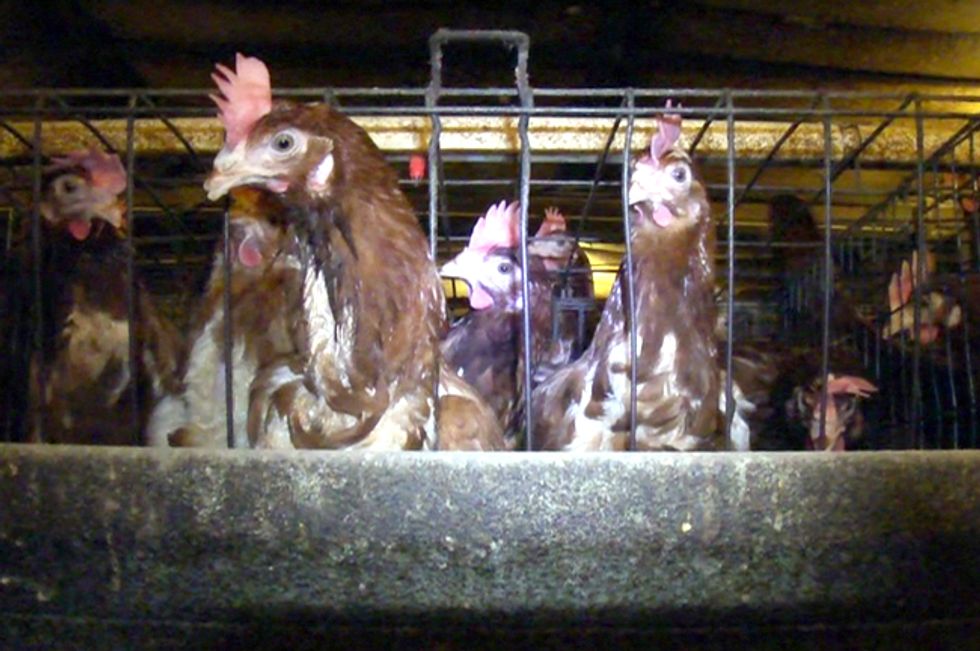 Chickens crammed into wire cages next to the rotting carcasses of other chickens. The floor of a barn coated with flies. Hens with their heads jammed between cages and feeding machines.

The Humane Society conducted an undercover investigation in 2012 at Kreider Farms in Manheim, Pa. Kreider cages about seven million egg-laying hens at its four Pennsylvania facilities. Photo by The Humane Society of the U.S.

The Humane Society of the U.S. released a video last year depicting those conditions at what it said was Kreider Farms in Manheim, Pa., in Lancaster County.

There was no criminal investigation. The owner of Kreider Farms, the largest egg supplier in the state, denied the charges and questioned the authenticity of the video. Later, state inspectors said that the Manheim location had met standards for agricultural facilities in previous years.

A recently proposed Pennsylvania bill would make it a crime to photograph, videotape or audiotape activities on farms without the permission of the owner. The bill would limit information to the public about food safety, animal cruelty and environmental issues, according to its critics.

Some opponents say such bills also limit gathering information and photos of natural gas drilling, much of which occurs on agricultural land.

Sponsors, who come from farm-rich counties, said the bill is about protecting family-owned and corporate farms.

However, opponents of the bill see it differently.

“It speaks volumes that this industry wants to make it a crime to merely take a photo of abusive, unsanitary or otherwise unethical activity,” said Matthew Dominguez, a public policy manager for the Humane Society.

“There has to be a certain degree of privacy when you own a farm,” said Rep. Gary Haluska, D-Cambria, the primary sponsor of the bill, who added that there are adequate health inspections of farms by state agencies.

The bill, introduced in February, is still in committee.

A spokesman for the Pennsylvania Farm Bureau said the group hasn’t yet taken a stand on it.

These “anti-whistleblower” bills—so-called because they make it a crime for an employee to report about wrongdoing by farm owners—have popped up throughout the nation. In some of the states there have been recent investigations of animal cruelty. And the environmental impact of Pennsylvania's drilling industry has been widely covered.

Dubbed ag-gag legislation, the bills have passed in Iowa, Utah and Missouri.

No photos of drill rigs?

Because the bills seek to criminalize whistleblowing, animal rights activists and fracking opponents said they create a chilling effect on what the public learns about animal cruelty, unsafe working conditions and environmental issues.

A spokesman for the Marcellus Shale Coalition said drilling companies do not deny “credentialed journalists” the ability to photograph or videotape drilling.

“I’ve been on dozens of drill tours with credible journalists to explain the drilling process,” said the coalition’s Patrick Creighton.

Steve Todd, an environmental engineer and citizen blogger in Dauphin County, said: “Pennsylvania legislation has been crafted to allow these big factory farms and now fracking (drillers) to just do what they want.” Todd started an online petition against the bill.

Dominguez points to the Humane Society’s investigation into a California slaughterhouse as an example of the kind of wrongdoing that can be exposed.

The 2008 undercover investigation into a Chino, Ca., slaughterhouse showed downer cows, those too weak or sick to stand, being repeatedly shocked with electric prods, rolled over with forklifts and having pressurized water shot up their noses. The company was found to be a major supplier of meat from sickened cows to school lunch programs.

The investigation resulted in a civil lawsuit brought by the Humane Society and the largest beef recall in U.S. history.

Had a bill like this one existed in California, Dominguez said, the conditions would not have been made public.

“The public is better served when there is more information available,” said Ken Bunting, director of the National Freedom of Information Coalition, which has signed a national petition against the bills. “Anytime you are trying to curb the exercise of watchdog journalism,” you run the risk of violating the First Amendment.

The bill is "scary," Pittsburgh photographer Scott Goldsmith wrote in an email. Goldsmith has frequently taken photos and videos of drill sites, including for PublicSource.org.

"It smells like they're trying to hide something," Goldsmith wrote. "What happens if something illegal, corrupt or environmentally dangerous is happening on the agricultural property?"

David LaBahn, president of the Association of Prosecuting Attorneys, said people shouldn’t become felons if they see a crime taking place and decide to do something about it.

“If someone is there lawfully and appropriately and they see animal cruelty and pull out their cell phone [to take a picture] and they send it into law enforcement ... they’ve committed a felony,” LaBahn said.

The law, established in 1986, makes it illegal for an employer to “discriminate or retaliate” against an employee if the person makes a “good faith report” about an incident of “wrongdoing or waste” of the employer.

“I always find it suspect when legislators are trying to create laws that are trying to keep information from the public,” Richards said.