Which U.S. Banks Are Risking Your Health by Financing Coal? 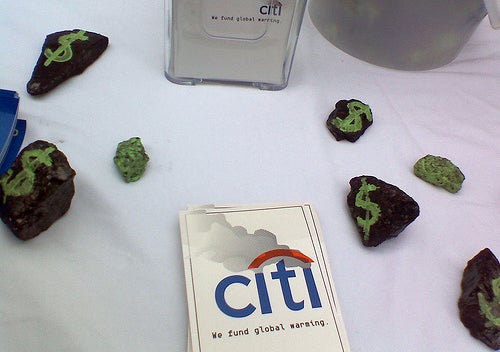 The report looks at the stated policies for mountaintop removal and coal financing from each of the largest U.S. banks and assigns a letter grade to show how well they uphold these policies based on investments, transactions and ownership of coal mining and coal burning utility companies.

In addition, this year’s report debuts the “Filthy Five”—the top five largest financiers of the U.S. coal industry. The list counts the number of transactions each company had with the dirtiest coal-burning utility companies and the largest mountaintop removal mining companies between January 2010 and March 2012. Bank of America was found to be the number one worst bank for financing of coal with 44 transactions. JP Morgan Chase was number two with 42 transactions, followed by Citi with 40 transactions, Morgan Stanley with 33 transactions and Wells Fargo with 26 transactions.

“The largest banks in the country, including Bank of America, Citi and Wells Fargo, received failing grades today as the lead financiers of the coal industry. These banks are the ATMs for a dirty industry that is bad for health and bad for business,” said Amanda Starbuck, director of Rainforest Action Network’s Energy and Finance Program. “Coal is the ultimate subprime investment for the climate. We cannot solve climate change if banks continue to prop up this risky and outdated industry. When it comes to protecting our air and drinking water, the health of our communities, and our climate, we don’t grade on a curve.”

The report sheds light on how banks with household names are complicit in polluting our air and destroying our natural resources. Mountaintop removal mining is a destructive process where mining companies blow the tops off mountains to reach a thin seam of coal. This practice has damaged or destroyed nearly 2,000 miles of streams and threatens to destroy 1.4 million acres of mountaintops and forests by 2020. In addition, the mining practice destroys Appalachian communities, the health of coalfield residents and any hope for positive economic growth.

Meanwhile, not only is coal burning responsible for one third of U.S. carbon emissions—the main contributor to climate disruption—but it is also making us sick. Coal pollution is responsible for 13,000 premature deaths every year, more than $100 billion in annual health costs and over 200,000 asthma attacks annually. Pollution from coal-fired power plants leads to smog, which can cause chest pain, coughing and breathing difficulties and can make conditions like bronchitis, emphysema and asthma worse, or even fatal. Today, two out of every five U.S. families live in places with unsafe air.

“These banks are financing a coal industry that is threatening our health, our mountains and the future of our planet,” said Mary Anne Hitt, director of the Sierra Club’s Beyond Coal Campaign. “Protecting the health and safety of our families is everyone’s responsibility—including those that fund destructive and dangerous coal mining and burning. We hope this report card helps draw attention and scrutiny to those who are bankrolling some of the biggest polluters in our country.”

Through this report, Rainforest Action Network and the Sierra Club point to where banks are failing as energy and climate leaders. However, both organizations maintain a strong commitment to work with the companies so they may adopt and implement meaningful policies on coal.

The full report is available by clicking here.