Which Is Worse for the Planet: Beef or Cars? 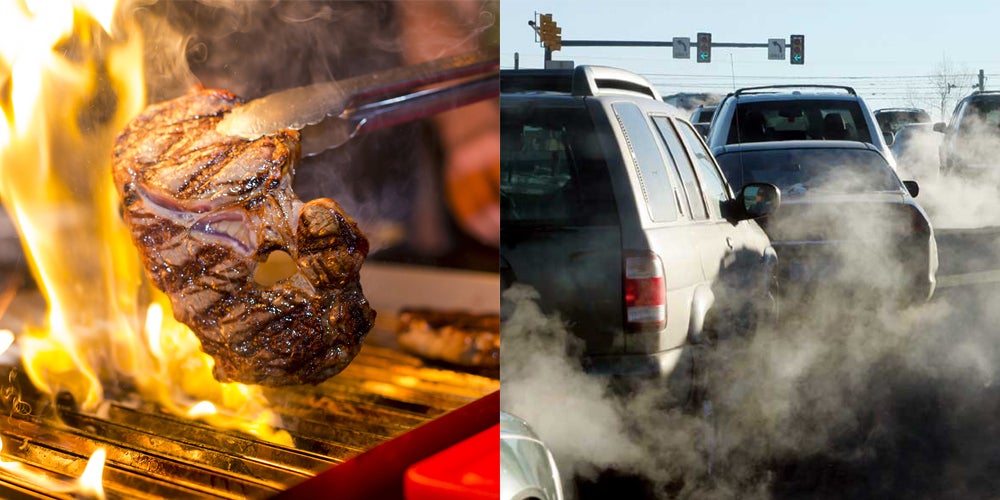 Cars are often used as the golden standard of environmental destruction. We know that our driving is hurtful to the environment. But, what about a burger? We don’t instinctually associate meat consumption with climate change, but does the dark side of the meat industry give cars a run for their money? Which is actually worse—cows or cars?

Livestock emissions make up anywhere between 14.5 and 18 percent of total global greenhouse gas emissions. Comparably, the transportation sector is responsible for around 14 percent of emissions. By those numbers alone, our current system of meat production is extremely damaging. Perhaps more looming, however, is that while transportation creates CO2, livestock farming is hugely responsible for producing methane. As you may know, methane is 23 times more potent when it comes to warming the planet. 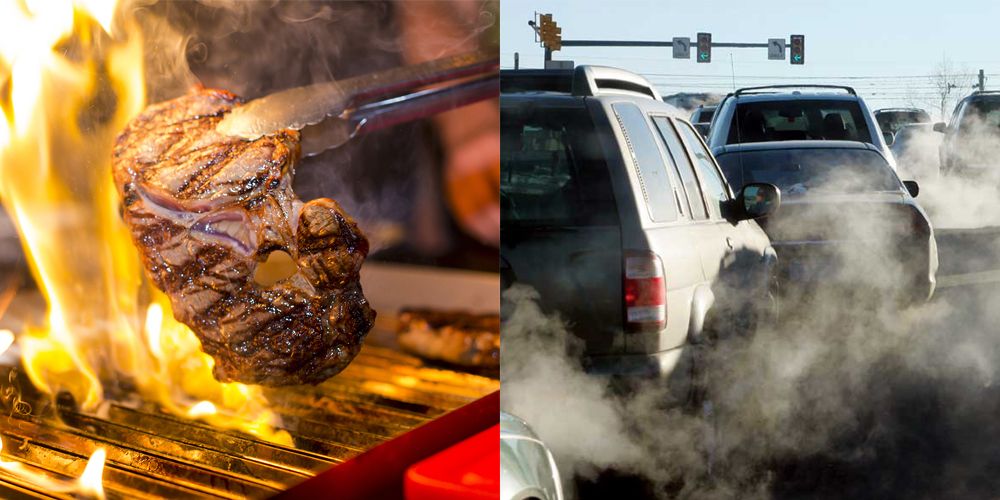 Yes, driving cars is no good, but meat production is unexpectedly worse for the environment. Besides all of the fertilizer and cow waste products that release methane, meat unfortunately has to be transported in refrigerated trucks from feedlots to slaughterhouses to processing centers to your local grocery store. In this way, factory farming combines all of the harmful effects of driving an 18 wheeler, plus some.

The issue is that meat does not appear as harmful upon cursory glance. You can see emissions coming out of your old car and seeping into the atmosphere. You can’t see emissions coming out of your hamburger. (Although, if you could see cow farts, that’d be a different story, as they shouldn’t be underestimated in their profound environmental impact. Buying grass-fed beef reduces entropic emissions (methane gas flatulence) in cows simply because their stomachs are designed to digest grass, not grains. So, small changes do make a difference).

If everyone enjoyed one meatless day a week—a simple and easily accomplished request, livestock emissions could be greatly reduced. Unfortunately, a rise in sustainable farming, while more humane and necessary, will not greatly alter the skyrocketing emissions caused by livestock. This is especially true since meat consumption is growing across the globe and projected to increase by around 70 percent by 2050. The only way to clean up our act is to change how we produce, consume and think about meat. We need to become less mat-centric as a whole.

Eating less meat is much more easily accomplished than converting our entire country’s infrastructure to run off of renewable energy—although we still need to be moving in that direction. We can start eating less meat immediately. Consuming less meat is also one of the few tactics for reducing greenhouse emissions that actually costs the consumer less money. Private solar panels cost money. New, fuel efficient vehicles cost money. Eating less meat means you’re potentially saving a little bit of money. It’s something that we can all do.

Clearly, what we need is a shift in mindset. Meat consumption is deeply rooted and deeply held in many cultures, but it has become a dangerous obsession. It’s like we are all sitting in a room steadily filling with smoke. It’s clear that something is on fire, but no one else is doing anything, so we sit tight. But, if you were in that room alone and it started flooding with smoke, wouldn’t you do something? Stop waiting for others to act. Make changes in your life to help the planet and others are sure to follow.

I don’t believe that humans will ever stop eating meat. But, it should be a priority to practice moderation with our meat consumption, if not for our collective health, then for the planet’s.