Which Is Healthier? Almond Butter or Peanut Butter 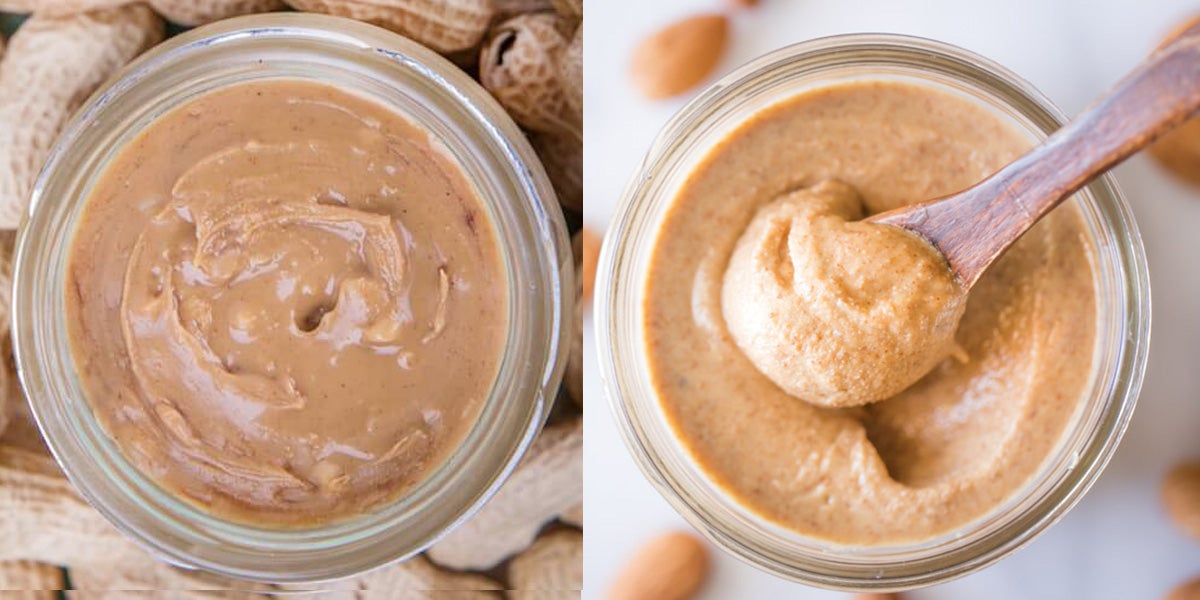 Almond butter and peanut butter have a lot in common.

Both are known for being good sources of plant-based fat and protein. And both lend themselves to many culinary uses, from spreading on toast to making curry.

Yet almond butter is usually at least double the price of peanut butter and has more of a health halo than peanut butter.

Is that hefty price tag worth it or is peanut butter just as healthy as almond butter?

This article will review and compare their health benefits, drawbacks and uses to tell you which one is healthier.

What’s the Difference Between Peanuts and Almonds?

Peanuts and almonds are the whole foods that are used to make each “butter.”

Peanuts are actually a legume, members of the same plant family as beans and peas. They are seeds from pods that grow underground.

Native to South America, peanuts are grown throughout tropical and subtropical regions, including Asia, parts of Africa, Spain and the Southern U.S.

By contrast, almonds are tree nuts. They grow on trees and are more closely related to other nuts, such as walnuts and cashews.

Interestingly, 79 percent percent of the world’s almond harvest comes from California, although they’re also grown in Mediterranean countries and the Middle East (1).

Almonds require a lot of water to grow and also need to be pollinated by honeybees. Both of these factors raise concerns over sustainability.

In comparison, peanuts require far less water to grow and the flowers of the peanut plant pollinate themselves.

The higher price of almond butter is partially due to the resources needed to grow almonds, combined with the high demand for almonds in all forms—whole, as butter, made into almond milk and in food products.

Summary: Almonds are a tree nut, while peanuts are a legume. Almonds require more resources to grow, which mostly accounts for their high price.

Differences in Taste and Usage

It’s hard to describe the difference in taste between almond butter and peanut butter without simply comparing the flavors of almonds and peanuts.

Peanut butter has a distinctively addictive smell and taste and a thick, sticky texture.

Almond butter is a bit sweeter tasting and is smoother and runnier than peanut butter.

Almond butter can be made from raw or roasted almonds, whereas peanuts are always roasted before being ground into peanut butter.

You can use the two nut butters fairly interchangeably. Both can be a spread on toast, used as a dip for fruit or added to a smoothie for extra fat and protein.

They can also be cooked into savory dishes, adding a nutty flavor and a creamy texture to stews or curries.

Almond butter’s milder taste means it can be added to dishes without being as noticeable. For instance, you can use it in pesto or hummus.

On the other hand, if you’re looking for the distinctive flavor of peanut butter, then almond butter won’t be a direct substitute.

Both almond and peanut butter can be made with just a single ingredient.

However, some brands add extra ingredients, including salt, sweeteners, other flavors and oils.

To make it easy to compare the two, the information below is for unsalted, single-ingredient varieties.

Here’s how a 2-tbsp serving of peanut butter stacks up against the same amount of almond butter (2, 3): 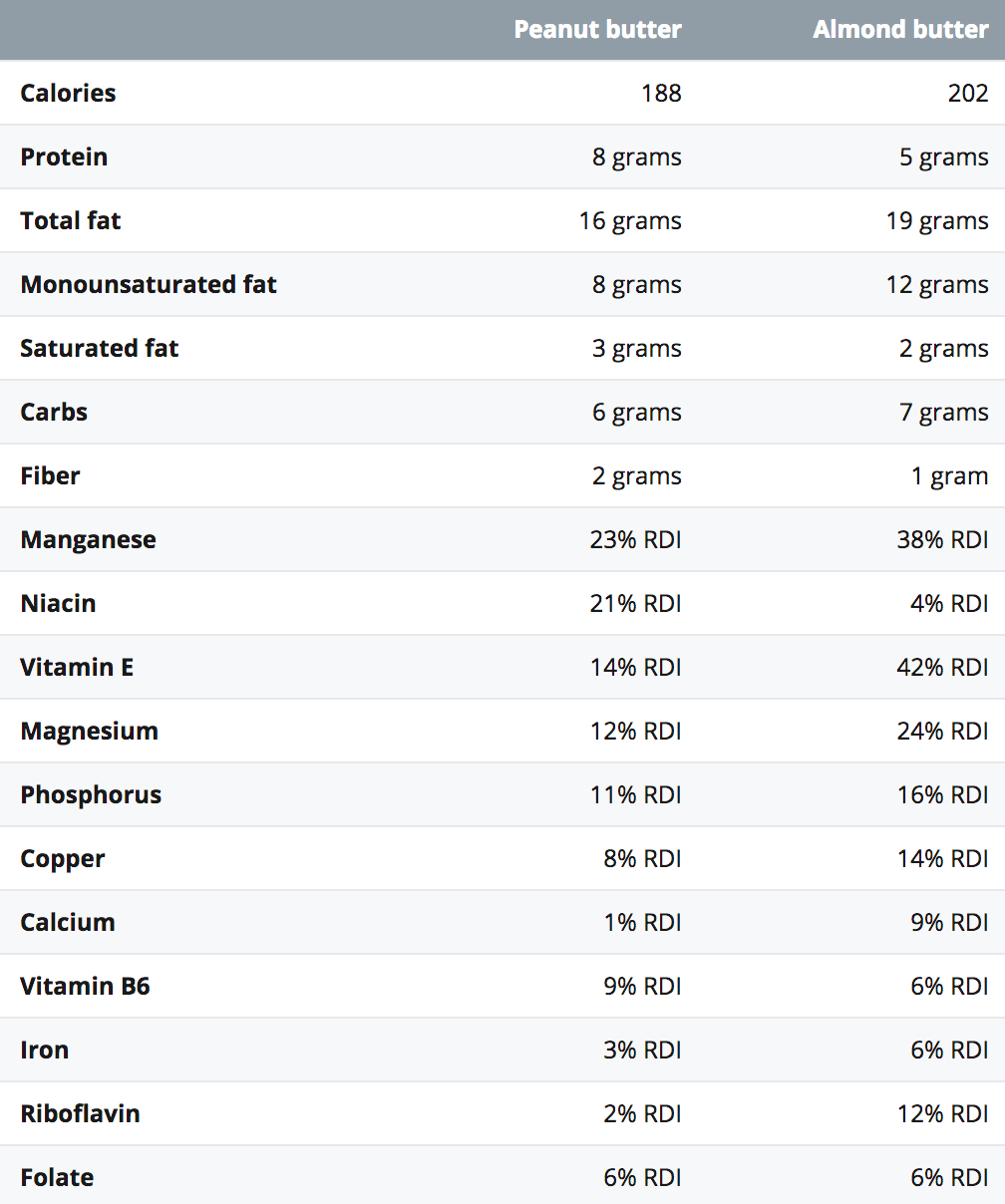 As you can see, peanut butter and almond butter are very similar, though peanut butter gets bonus points for having slightly fewer calories and more protein.

However, almond butter delivers a higher percentage of certain nutrients, including vitamin E, magnesium, manganese and calcium, which are important for health.

Additionally, crunchy varieties of both almond and peanut butter have a bit more fiber than smooth versions.

In terms of general health benefits, almond butter and peanut butter are similar.

Regularly including peanuts, almonds and their butters in your diet may provide the following benefits:

Summary: Both almonds and peanuts, as well as their butters, have several health benefits including lowering the risk of heart disease, high blood pressure and high cholesterol levels.

Why Is Almond Butter Perceived as Healthier?

There may be several reasons for that.

The primary one is likely that peanuts are legumes and almonds are tree nuts.

Legumes have a bad rap in certain circles, in part because many people feel bloated after eating them.

While other types of legumes, including beans and lentils, contain easily fermentable carbs that can make you gassy, peanuts and peanut butter do not (24, 25, 26).

Another thing that’s often brought up is that peanut butter contains antinutrients, such as phytic acid, which reduce the absorption of other minerals.

While this is true, almond butter also contains antinutrients.

Moreover, research increasingly suggests that antinutrients may actually have some benefits, despite their drawbacks. For instance, phytic acid is also an antioxidant that may reduce the risk of certain cancers (27, 28, 29, 30, 31).

Believe it or not, almond butter’s hefty price tag may also bias some people to think almond butter is better for them than less-expensive peanut butter.

Recent research found that people believe that healthier food is more expensive. Many equate a higher price with a healthier product (32).

Lastly, some of the bias against peanut butter may simply be due to misperception.

Many articles that claim almond butter is much healthier than peanut butter point to “facts” that are simply untrue, such as almond butter having fewer carbs or not having a risk of aflatoxins (33).

Aflatoxins are toxic compounds produced by mold that can grow in a number of raw foods. The truth is that peanuts and almonds are equally at risk (34).

Summary: There are several reasons people may believe almond butter is better than peanut butter. However, they don’t hold up well to scrutiny.

For the most part, both almond butter and peanut butter are healthy foods without many drawbacks.

However, there are a few concerns that should be addressed.

Here are the primary ones:

Peanut butter and almond butter are both healthy choices.

However, both deliver the same major health benefits, including lowering the risk of heart disease and helping keep blood sugar steady.

At the end of the day, the healthier one is the one you’ll eat regularly. So choose whichever one you prefer and can afford.