Where Has All the Ice Gone? 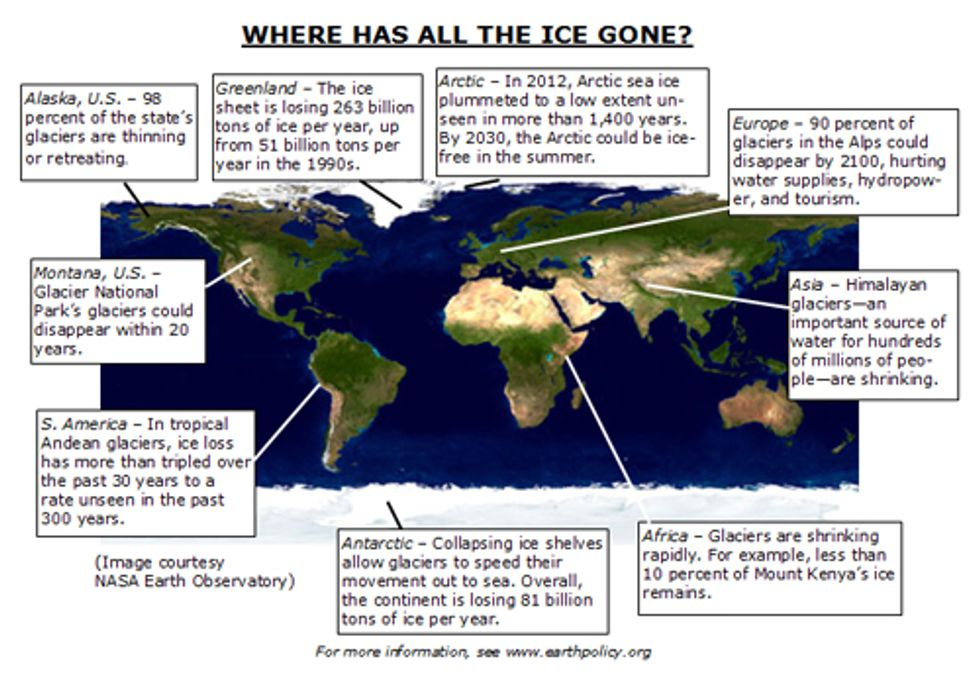 Eco-Economy Indicators are twelve trends that the Earth Policy Institute tracks to measure progress in building a sustainable economy. Ice melting is one of the most visible indicators of climate change.

As the earth warms, glaciers and ice sheets are melting and seas are rising. Over the last century, the global average sea level rose by 17 centimeters (seven inches). This century, as waters warm and ice continues to melt, seas are projected to rise nearly two meters (six feet), inundating coastal cities worldwide, such as New York, London and Cairo. Melting sea ice, ice sheets mountain glaciers are a clear sign of our changing climate.

In September 2012, sea ice in the Arctic Ocean shrank to a record low extent and volume. The region has warmed two degrees Celsius (3.6 degrees Fahrenheit) since the 1960s—twice as much as lower latitudes. With less snow and ice to reflect the sun’s rays and with more exposed ocean to absorb heat, a vicious cycle leads to even warmer temperatures. Thinner ice combined with rising temperatures makes it increasingly difficult for the sea ice to recover. The historically ever-present white cap at the top of the globe could disappear entirely during the summer within two decades.

The Arctic plays a pivotal role in large-scale weather patterns. The stark contrast between cold air at the North Pole and warmer air in the temperate zone drives the jet stream over North America, Europe and Russia. As the Arctic continues to warm faster than the rest of the globe, this contrast diminishes. This can change the path of the jet stream and slow it down, leaving weather systems in the same place for a longer time. A rainy spell that sticks around can turn into flooding, while a sunny spell can turn into a drought.

Warming in the Arctic is particularly important because of its effects on Greenland’s enormous ice sheet. Greenland’s ice loss has accelerated from 51 billion tons per year in the 1990s to 263 billion tons per year today. In July 2012, an iceberg twice the size of the island of Manhattan calved off Petermann glacier in northwestern Greenland. This was the second large calving event off this glacier in just two years: the iceberg that broke away in August 2010 was twice as large.

While Greenland’s ice loss is astonishing, on the other side of the globe, parts of Antarctica’s vast ice sheet may be even less stable. The continent is flanked by 54 major ice shelves, which act as brakes slowing the movement of ice in land-based glaciers out to sea. Twenty of them show signs of thinning and weakening, which translates into accelerated ice loss. After the 3,250-square-kilometer Larsen B Ice Shelf collapsed in 2002, for instance, the glaciers it was bracing flowed up to eight times faster than before. The most dramatic thinning is in West Antarctica.

Pine Island glacier, which flows into the Amundsen Sea, is one of the main outlets for West Antarctic ice. A rift now stretches 29 kilometers across the glacier’s ice shelf, threatening to release an iceberg 14 times the size of Manhattan. Warm deep ocean water has penetrated beneath it, causing an astounding rate of retreat. In the past 20 years, the grounding line where the bottom of the glacier meets the ocean retreated by 25 kilometers, whereas over the previous 10,000 years it only moved back by 90 kilometers.

The movement of land-based ice to the ocean raises sea level. Together the West Antarctic and Greenland ice sheets contain enough ice to raise seas by 12 meters, if they disintegrate entirely. Just a one-meter rise—well within the projections for this century—would flood half of the riceland in Bangladesh and much of the Mekong Delta in Viet Nam, two countries that are leading rice producers.

Melting mountain glaciers contribute to sea level rise as well, but they are of more immediate concern because of their roles in the everyday lives of millions of people. They provide drinking water for villages and cities, irrigation water for farms and fuel for hydropower plants. These vital services are in jeopardy because mountain glaciers worldwide are shrinking at accelerating rates. For instance, 37 reference glaciers studied by the World Glacier Monitoring Service shrank three times faster from 2000 to 2009 than from 1980 to 1989.

The glaciers in the Himalayas—the largest concentration of ice outside of the two poles—have been dubbed Asia’s “water towers” because of their large water storage capacity. Their runoff feeds Asia’s great rivers, including the Indus, Ganges and Brahmaputra, which support hundreds of millions of people. Climbers attracted to the one-of-a-kind peaks tell their own stories of melting ice. In many places, what had been blinding white ice and snow fields in the days of the first explorers are now bare rock. More avalanches and more crevasses add risk to already dangerous treks. Data collected by the Chinese Academy of Sciences validate these anecdotes, showing that glacier melt in the Eastern and Central Himalayas has sped up. This will continue as temperatures rise.

Glaciers in the Alps perform a similar water tower function for Europe, and they too are shrinking. Switzerland’s Great Aletsch glacier, the largest in the Alps, has retreated by more than two kilometers since 1900. In Germany, a local ski company concerned by the rapid shrinkage of Zugspitze glacier resorted to covering the ice with a 9,000-square-meter reflective blanket. But this is just a Band-Aid; without addressing the real problem of rising temperature, 90 percent of all Alpine glaciers could be wiped out by 2100. Such a dramatic loss can already be seen in the nearby Spanish Pyrenees Mountains, where close to 90 percent of the glacier cover has disappeared over the past century.

In the U.S., almost all of Alaska’s glaciers are retreating or thinning. For example, data collected at Gulkana glacier each year since 1966 reveal an ice loss trend that has sped up since the early 1990s. In Montana, Glacier National Park may be “glacier” in name only within two decades. Only 25 of the park's 150 original glaciers remain.

Nearly all of the world’s tropical glaciers are found in South America in the Andes. Rising temperatures have more than tripled the rate of ice loss from these glaciers since the mid-1970s. In Peru, more than two million people depend on runoff from the Cordillera Blanca (the White Range). As the mountain range’s glaciers began to waste away, water runoff temporarily increased. But glaciologist Michel Baraer of McGill University in Canada estimates that runoff has already peaked and is now in decline. Bolivia’s famous Chacaltaya glacier, once a popular ski site, can now be found only on old maps. The runoff from Zongo glacier flows through 10 hydropower plants that currently generate some 25 percent of Bolivia’s electricity. But Zongo’s ice is retreating by nine meters per year. As water supplies dwindle, competition among hydropower stations, farmers, and cities will get worse.

The last remaining glaciers in the tropical Pacific, on Indonesia’s Puncak Jaya Mountain, also are melting fast. Between 1936 and 2006, this mountain lost close to 80 percent of its ice cover. During world-renowned glaciologist Lonnie Thompson’s recent expedition to sample the ice before it disappears—along with the historical climate data trapped inside the ice—heavy rains thinned the ice around his campsite by 30 centimeters in just 13 days.

Tropical glaciers in Africa are wasting away too. Less than 10 percent of the original ice cover remains atop Mount Kenya. In 2009, Nairobi had rolling blackouts due to the diminished runoff from the mountain flowing to hydropower stations. The problems are more than just practical; the glacier has long held cultural and spiritual significance. Neighboring Uganda’s Rwenzori Mountains could be ice-free within 20 years.

The race is on between disappearing ice, which is melting faster than predicted, and reductions in carbon emissions, which is happening slower than hoped. The world will need a World War II–type mobilization to shift from climate-disrupting fossil fuels to renewable sources of energy if we are to stand a chance of preventing runaway global warming and unstoppable melting.