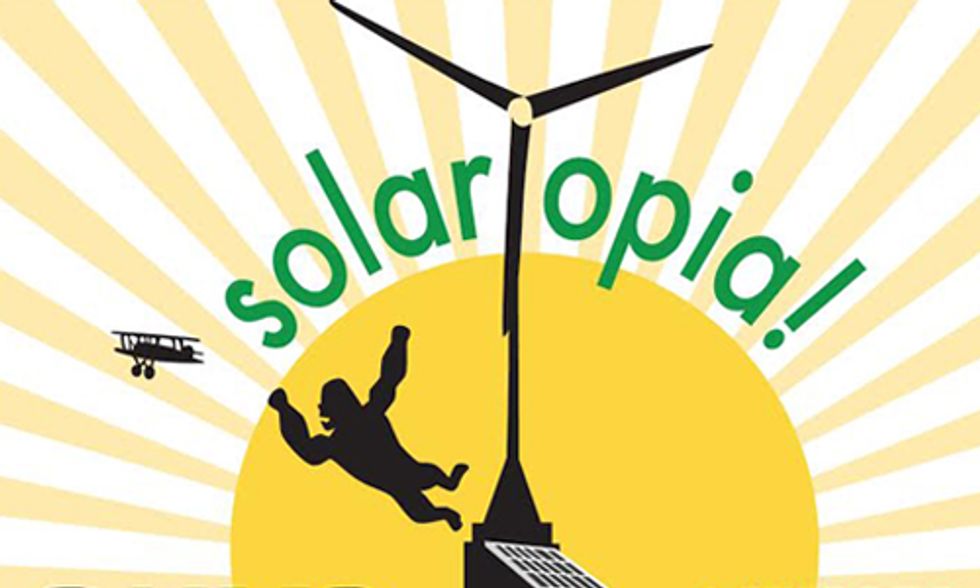 A green-powered future is our only hope.

But to get beyond it, our Solartopian vision must embrace more than just a technological transformation.  It also demands social, political and spiritual transcendence.

From Fukushima to global warming, from fracking to the Gulf disaster(s), it’s clear the fossil/nuclear industry is hard-wired to kill us all. Its only motivating force is profit; our biological survival has no part in the equation.

Likewise, our food supply cannot be sustained with chemical pesticides, herbicides, fertilizers, monoculture, industrial meat and genetic modification. The switch to organic, sustainable agriculture is essential to our survival

But this vital transformation in food and energy will not happen in a vacuum. We can prove the economic, ecological and public health rationale for a Solartopian transition.

But we can't win without a cultural and political transformation.

That starts with the empowerment of women. Nature-based societies are matriarchal. And only when women are guaranteed equal education, pay and control of their reproductive rights will the human population come into balance with the planet’s ability to support us.

We must also cure the corporate virus that’s killing us all. Our economic and political system is being devoured by a Frankenstein monster whose only imperative is to make money. It claims human rights but has no human or ecological responsibilities. Until the engines of our economy are made accountable to us and the planet, we have no chance of survival.

The corporate monster's primary assault mechanism is war, the continual slaughter of humans and the Earth. War’s only predictable long-term outcome is massive corporate profit and a destroyed planet. It is the ultimate divide-and-conquer strategy of a terminal cancer.

Sustaining our life also means all humans must be fed (which can be done globally at a fraction the cost of war), housed, clothed, educated and healthy. Without social justice, Solartopia is a meaningless dream.

And there’s only one way to get there—with true democracy, which cannot be had while corporations own and operate our government. Big money must be banned from our elections, which can only happen with universal voter registration and hand-counted paper ballots.

We also need a neutral internet, free of corporate control, a global nervous system by which our evolving consciousness can freely communicate.

As a species we can count great strides in cultural awareness and social ecology. But in the material world we run a dead heat with mutant fossil/nuke technologies and the vampire corporations now draining the life out of us and our planet.

In the long run, our human survival instinct must transcend the corporate profit motive.

There are those who say it’s hopeless, and that the battle is already lost.

But for the rest of us, for our kids and grandkids, not to mention our own good times, let’s just say we’ll see you in Solartopia ...