What’s the Matter with Carly Fiorina? 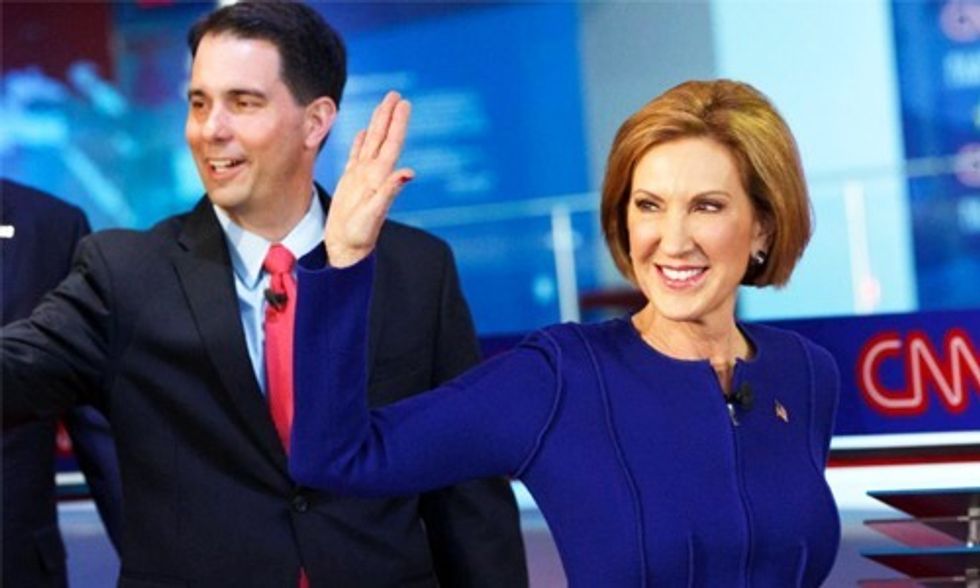 There’s a clear pathway to the Republican nomination for Carly Fiorina after last week’s debate, this week’s poll results and the departure of Scott Walker from the Republican race.

It begins with an irony. Republican analysts chortled all this year over the “strength” of their Presidential field: eight present or former governors who had led almost all the big states—Florida, New York, Ohio, New Jersey—five current or former U.S. Senators, plus a couple of doctors and two business tycoons—Donald Trump and Fiorina, who were high on no one’s probable list. But the Republican electorate was having none of it. They migrated, virtually stampeded, to the doctor with no political taint, Ben Carson, plus the two tycoons, Trump and now Fiorina.

1. Gender. As long as Trump maintains as part of his brand his boorish, insensitive and outdated chauvinism, there is a space in the field for someone able to take him on. Here, being a woman helps. And being a woman with the skill to know that all she has to say is, “I think women all over this country heard very clearly what Mr. Trump said.”—priceless. Trump is creating an otherwise absent gender dynamic within the Republican electorate—and only Fiorina can benefit from it.

2. Timing. Fiorina elbowed her way into the debates, but her early absence from the main stage meant that she missed being expected to crush Trump—and the men who failed at that task are much like the rejected suitors of Atlanta—their candidacies sentenced to death. Now there is a good chance that the media is tired of covering a baker’s dozen of candidates and is ready for an old-fashioned smackdown from Trump’s WWE days. Scott Walker’s departure with a call for other candidates to join him “for the good of the party” will help tee up such a media shift. With Trump at 24 percent in the latest poll, Fiorina in second at 15 percent and Ben Carson (14 percent) and Marco Rubio (11 percent) close to her, Carly’s not the only choice for that role. But if she can open up even a little air between her and Rubio, she could easily be anointed as the “not Trump” to beat in the race.

3. Potential Angels. When Walker pulled out, he begged the other laggards to get out of the race to “stop Trump.” Donald is not conservative enough for Walker. But Walker’s appeal is unlikely to lure many of the significant candidates out of the race—which means that business Republicans, whose concerns about Trump are very different than Walker’s, are left looking for someplace to hide. John Kasich might yet take off, but he hasn’t; and Jeb Bush continues to languish. While the business elite may not like Carly, they are not terrified of her; she is extreme (as they see it) only on issues they don’t care that much about (Planned Parenthood). Fiorina’s has two big primary campaign weaknesses—money and organization. And business Republicans looking for someone to replace Jeb as their fire-wall against Trump might easily fix the first of her two problems.

4. Message. Fiorina is a compelling communicator—particularly in this Republican field. She is a refreshingly crisp contrast to Trump, without sounding like a sound bite coached politician. The Guardian picked this as one of her key attributes, going to Frank Luntz and Dan Schnur to validate their view. Rose Kapoloczynski, former campaign manager for Senator Barbara Boxer (who beat Fiorina in 2010) described her as:a terrific performer on the political stage.

If Rubio doesn’t take off soon and Trump holds on but can’t put the nomination away, these assets might give Fiorina the nomination. But look ahead to the November general election and the picture is very different.

It’s different for two reasons: the electorate is obviously much different and so are the issues—questions of economics, family earnings and inequality, which simply haven’t featured in the Republican primary very much, become absolutely essential and Fiorina and her Democratic opponent disagree so clearly on abortion and immigration that those voters are locked in from day one. So November 2016 is again going to be about the economy.

1. Gender. In a general election campaign against Clinton, Fiorina’s likely to slip back into her harder edged style that came out when she ran against Boxer in 2010. And her hyper-social conservatism on Planned Parenthood is unlikely to play well with independent women, the big general election swing group.

2. Timing. Fiorina has emerged very early and with an opponent, Trump, whom the Democrats don’t need to define—he has very much defined himself and rest of the Republicans will go after him. The Democrats can sit and watch—meanwhile defining Carly in terms that will be lethal in the general election, leaving Fiorina fighting a two front war.

3. Message. Fiorina talks compellingly. But she also makes stuff up. The media has already lashed into her for creating out of thin air a Planned Parenthood video about harvesting a foetal brain. She also appears to have misrepresented the family tragedy involving the death of her 35 year old step-daughter, her objections to renewable energy (solar takes too much water) and the performance of Hewlett Packard while she was its CEO.

Carly also made some astonishing statements about the California drought this spring. She said that the drought had been created by environmentalists and liberal politicians because they failed to build enough new dams and canals and that with “different policies” “all this could be avoided.” Really? California currently has 2,700 named dams and reservoirs. In the last twenty years there has been controversy about five new projects; none have been built, largely because building them would cost $9 billion and they would increase the state’s average water yield by only one percent. But of course, 2015 is not an average year; the states reservoirs are filled at only 42 percent of the normal level, so this year those five dams, if built, would be expected to increase water deliveries by .4 percent. How much would that help? Well, it turns out the state has issued “rights” to 370 million acre feet of water a year, when average rainfall delivers only 70 million acre feet to lakes, streams and rivers. Against that deficit, the 160,000 acre feet that five new big dams might yield hardly constitutes avoiding “all this.”

4. Performance. Her resume leads with her leadership of Hewlett Packard. The most politically salient piece of that tenure was laying off 30,000 workers. That gave the Boxer campaign 30,000 potential lethal surrogates against Fiorina and they used them to crush her in a very Republican year. Worse, Fiorina never got the enthusiastic support of the California business community—either because she did a terrible job running Hewlett Packard or because too many stories were circulating about her abusive behavior while running the company.

If Barbara Boxer could crush Fiorina in 2010, the Democratic nominee in 2016 has some very powerful ammunition in a campaign even more dominated by inequality and the economy.