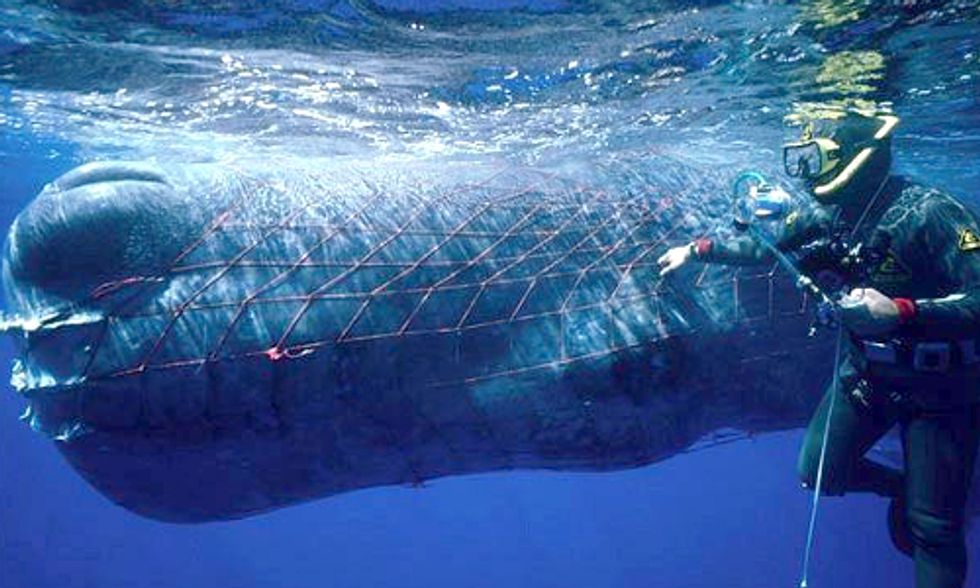 In order to put wild-caught seafood on dinner tables, more than 650,000 marine mammals are killed or seriously injured every year in foreign fisheries after being hooked, entangled or trapped in fishing gear, and enforcement of a U.S. law to protect marine mammals could help prevent tens of thousands of these deaths, according to a new report issued today by the Natural Resources Defense Council (NRDC).

Consumers can play a role in protecting whales, dolphins and sea lions by choosing only to buy American-caught seafood. Photo credit: The Black Fish Facebook page

The report, Net Loss: The Killing of Marine Mammals in Foreign Fisheries finds that 91 percent of seafood consumed in the U.S. is imported and nearly every foreign fish product sold in the U.S. violates a federal marine mammal protection law. The wild-caught seafood most enjoyed by Americans—shrimp, tuna, crab, lobster and salmon—present a particularly significant risk to marine mammals due to the dangerous fishing practices associated with them abroad. Until the U.S. enforces the law, which requires importing countries to prove they are meeting American standards, consumers can play a role in protecting whales, dolphins and sea lions by choosing American-caught seafood.

“No one wants their shrimp cocktail to come with a side of dolphin, but that’s essentially what’s happening when we eat imported fish that isn’t held to the same standard as American seafood,” said Zak Smith, attorney with NRDC and co-author of the report. “For 40 years, federal watchdogs have failed to enforce a law that could save thousands of whales and dolphins from negligent foreign fishing practices. At the same time, well-meaning U.S. fishermen are being undermined by their own government, which holds them accountable, but not their foreign counterparts.”

This report examines the failure of the U.S. government to enforce protections under the Marine Mammal Protection Act, which requires countries exporting fish products to prove the fish were not caught in violation of U.S. standards that limit serious injury and death of marine mammals.

The report identifies the primary species and populations at risk of extinction that would be helped by enforcement of the U.S. import protections law, the key fishing practices that endanger marine mammals, and regions of the world where bycatch is a critical concern. The unintentional capture of animals in fishing gear, or bycatch, is pushing some marine mammal populations to the brink of extinction.

Species most affected by seafood exports for American markets:

“Bycatch isn’t just a moral issue, it’s simple economics,” said Acy Cooper, vice president of the Louisiana Shrimpers Association. “Foreign fishing companies can undercut our prices because they don’t have to invest in ensuring that their exports to the U.S. were caught in a manner that protects marine mammals."

"Until foreign fleets see real consequences for failing to abide by the law, marine mammals will continue to be harmed around the world and American fishermen will be disadvantaged,” said Cooper.

The key types of fishing gear that threaten marine mammals around the world include:

However, there are smart and targeted methods that can be employed to reduce risk and harm to marine mammals from dangerous gear, including time and area exclusions, warning systems and gear modifications that make escaping entanglement more likely. An aggressive, science-based plan adopted by the U.S. in 1994 has reduced marine mammal bycatch by nearly 30 percent over 20 years and put special measures in place to save populations at highest risk.

“In many parts of the world, poor fishing practices are driving populations and species of marine mammals to extinction,” said Dr. Andrew J. Read, Stephen Toth Professor of Marine Biology, Division of Marine Science & Conservation, Nicholas School of the Environment, Duke University. “We have lost one species already and several others are in imminent danger. Most Americans would be shocked to learn of the hundreds of thousands of whales, dolphins, and porpoises killed each year in bringing wild seafood to our tables.”

For other countries to take action, the National Marine Fisheries Service (NMFS)—the federal agency with jurisdiction over the interpretation and enforcement of the Marine Mammal Protection Act—needs to hold other nations to the same bycatch standards. These include requiring all imported fish or fish products be accompanied by information on the status of affected marine mammal populations, proof that protective measures were utilized and proof that fisheries were monitored for their compliance and are working towards a goal of zero marine mammal deaths. In response to petitions and comments filed years ago by NRDC and other environmental groups, the administration began preparing regulations to enforce the law, but has not released them.

Until the U.S. enforces the law, consumers can also play a role in protecting marine mammals by purchasing American-caught seafood that abides by U.S. safety standards. It is critical to identify wild-caught seafood as American, due to the significant threat posed to marine mammals by imported shrimp, tuna, crab, lobster and salmon. Federal law requires seafood be clearly marked with the country of origin, but consumers should also ask the retailer, restaurant and producer for more information about where the fish was caught.

“It is time to enforce our laws protecting the world’s marine mammals,” said Smith. “American consumers and fishers as well as some of the world’s most unique and captivating creatures deserve no less. Fortunately, after years of neglect, the federal government is developing rules to enforce the provision. We need to hold them to it.”