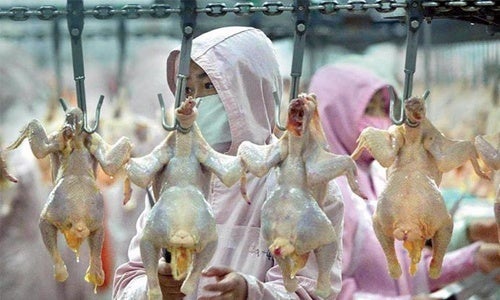 Although the news came out more than a year ago, the U.S. Department of Agriculture’s (USDA) controversial chicken arrangement with China is still ruffling feathers. As EcoWatch reported in March 2014, the USDA now allows chicken to be sent to China for processing before being shipped back to the states for human consumption. One reason this story is resurfacing is a recent Facebook post by Erin Brockovich, who is outraged that this export/import policy exists.

Most Americans would probably agree with Brockovich that sending homegrown chicken on a 14,000-mile round trip is unnecessary and absurd, especially with China’s appalling food safety standards. Even National Chicken Council spokesman Tom Super said that the arrangement “doesn’t make much sense” economically.

The big question then is why would the U.S. allow frozen chicken to be shipped to China from America, then have a Chinese company cook the chicken, refreeze it and send it back to the states?

The answer, as it was later reported by Newsweek and other publications, is that the USDA’s Chinese chicken arrangement is much more about the profitable meat product or beef, than it is about chicken.

According to Vice, “The USDA’s move to bring Chinese plants into the American fold is just the first step in a politically motivated process to get the country to give the U.S. something in return. In 2003, when mad cow disease was discovered in cattle in Washington state, China enacted a ban on imported U.S. beef that continues to this day. With China’s meat consumption on the rise, it makes sense that U.S. beef producers would want to recapture that lucrative market. By starting to accept China’s processed chicken, the U.S. is apparently warming to the idea of soon accepting the country’s raw, unprocessed poultry—a move that might convince China to lift its beef ban.”

Brockovich’s Facebook post has been causing quite a stir with more than 4,700 likes and 6,200 shares. In the post she calls out the dubious relationship between the respective countries’ chicken and beef industries.

Brockovich also added in the comment section: “We export rice to China … farmed with California water … so we get chicken? What is wrong with us?”

But the good news is, we’re not likely eating U.S. chicken by way of the Far East. Even though a similar process is already being used for U.S. seafood and outsourcing labor to China might be desirable for some stakeholders (China’s chicken workers earn about $1 to 2 per hour), lobbyists and chicken industry proponents argue no U.S. company will ever ship chicken to China for processing because it wouldn’t work economically.

Newsweek also reported that the country’s four major chicken companies (Tyson, Pilgrim’s Pride, Sanderson Farms and Perdue Farms) have not yet put any money into this export/import plan, nor have the National Chicken Council or the U.S. Poultry and Egg Association.

Tyson Foods even felt compelled to issue an official statement on the matter and respond directly to a concerned Twitter user.

@jasonbebright2 All chicken we sell in U.S. is raised/processed here. Not importing chicken from China No 75K layoffs http://t.co/fioSe0Mcod