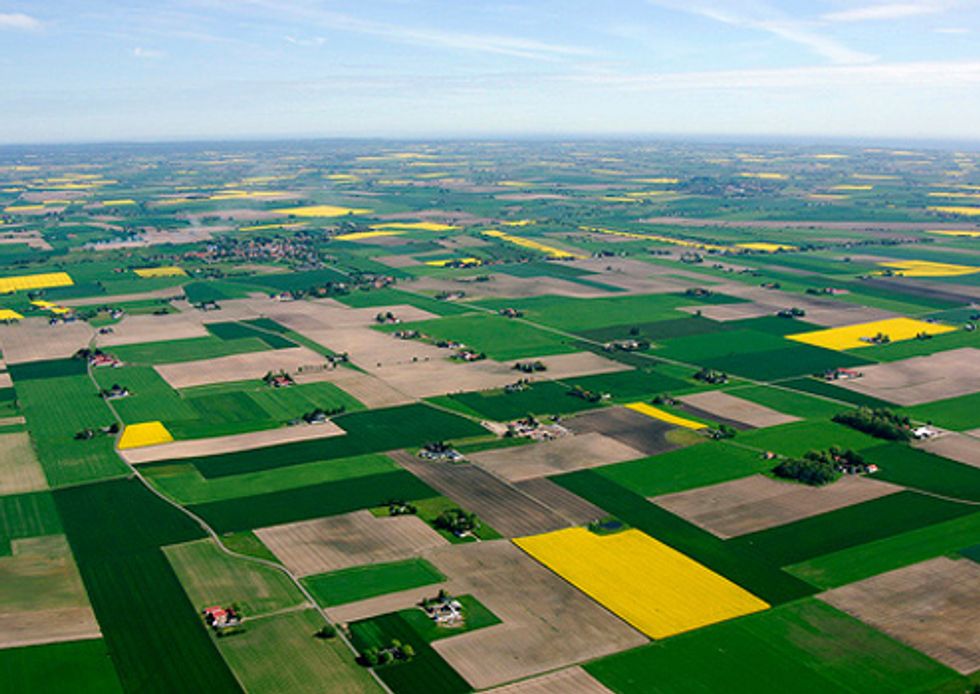 With the failure of the Super Committee process last fall, Agriculture Committee leaders now resume work on the 2012 Farm Bill through a more normal process that involves hearings, committee mark-ups, and a committee and floor amendment process. The current farm bill expires Sept. 30, 2012, and Congress must take action on farm policy by then if it wants to avoid reverting to 1949 farm law—the fallback permanent law for the farm bill. That action can come in the form of passing a stand-alone farm bill, attaching a farm bill proposal to another bill, or passing a short or long-term extension of current law either as a stand-alone measure or attached to something else. Significant political, budget, and committee factors will influence that choice as well as the timing of the farm bill process this year.

The political backdrop for everything that Congress does this year is the 2012 Presidential and Congressional elections. This affects the farm bill process in two main ways. First, the legislative calendar will be shorter to accommodate Congressional campaign schedules. That leaves less time for hearings, committee meetings, and floor debates and votes. Given the condensed Congressional schedule, the majority of the work on the 2012 Farm Bill, though not necessarily final votes, would have to be finished by summer for a new bill to be enacted in 2012.

Second, Congress is closely watching approval ratings. Just about every legislative effort in the first session of the 112th Congress entailed a knockdown, drag-out fight between the Republican-controlled House and the Democrat-controlled Senate and Oval Office. The long, partisan legislative battles have resulted in very low Congressional approval ratings. In this second session, Congressional leaders will be watching those ratings closely, and will be hesitant to engage in serious legislating unless there is notable pressure from the public.

Just because it’s an election year, however, does not mean that Congress can’t work on farm policy. Congress has previously passed a farm bill in an election year; the Food, Energy, and Conservation Act of 2008 was, in fact, passed in the presidential election year of 2008. But unlike the current situation, both the House and the Senate had already passed their versions of a farm bill in 2007. The work in 2008 was focused on reconciling the differences in the two bills through a conference committee and then passing the compromise.

While not a make-it-or-break-it factor, the administration has indicated that it will not be releasing a comprehensive farm bill proposal this year, and that it will largely leave the farm bill reauthorization up to Congress. Any benefit that the farm bill would receive from being a presidential priority—including media coverage, pressure on Congress to act, and discussion during the Presidential campaign—will, therefore, not occur.

With several vulnerable Democratic seats and several retirements in the Senate, it is within the realm of possibility that Republicans will gain control of the Senate in the November election. This factor may motivate Senate Democrats to move forward with the farm bill.

The Democrats on the Senate Agriculture Committee up for reelection in 2012 are Chairwoman Debbie Stabenow (D-MI) and Sens. Amy Klobuchar (D-MN), Kristen Gillibrand (D-NY), Sherrod Brown (D-OH), and Robert Casey (D-PA).  Sens. Kent Conrad (D-ND) and Ben Nelson (D-NE) are retiring. Of the five incumbent Democrats on the Committee seeking reelection, none is in a tight race at the moment. If that changes, then the pressure to deliver a farm bill in the Senate could increase.

There are more questions than answers about how budget factors will influence the farm bill process. What does seem almost certain is that the overall price tag of the 2012 Farm Bill will be lower than that of the 2008 Farm Bill. How much lower is anybody’s guess.

If All Else Were Equal

When Congress passed the 2008 Farm Bill, it provided mandatory funding for many of the programs on a permanent basis, funding that was counted (“scored” in budget terms) for a ten year period—2008 through 2017. There were a number of programs, however, that it only provided mandatory funding for through 2012. The programs that run out of money after 2012 total about $4.5 billion (excluding farm disaster payments), so even if Congress weren’t required as it currently is under the Budget Control Act to cut spending on mandatory programs including agriculture, it would have to find an additional $4-5 billion to cover the cost of extending the farm bill at current spending levels.

Because Congress failed to come up with a bill through the Super Committee process to cut the deficit by $1.2 trillion over ten years, automatic budget cuts (“sequestration” in congressional parlance) will go into effect in January 2013 under the Budget Control Act passed in August 2011. Rough estimates from the Congressional Budget Office peg the cut to farm bill spending under sequestration at $15.6 billion. By law, the Supplemental Nutrition Assistance Program (SNAP) and the Conservation Reserve Program are exempt from sequestration cuts, so savings would come from other parts of the bill—most notably from the crop insurance subsidies, followed in terms of size of cut by the commodity program payments and then the conservation incentives.

If Congress does not amend the Budget Control Act—which mandates sequestration—and sequestration takes effect, and Congress has reauthorized a new farm bill by next January, then budget cuts could be made in the new farm bill that would supersede the automatic cuts. That is not to say that it must happen that way, only that it could. If it did, it would put Congress back in the driver’s seat in allocating the cuts, rather than the automatic pro rata cuts. It would also put Congress back in the driver’s seat with respect to the policies that would yield the budget savings, rather than punting those decisions to U.S. Department of Agriculture (USDA) and the White House as would be the case under sequestration.

If January 2013 arrives without a new farm bill (but presumably with some sort of temporary farm bill extension), and sequestration happens, then the Agriculture Committees may have the opportunity to re-shape the cuts through a 2013 Farm Bill, though only after the first-year cuts have already been made.

Between now and when the automatic cuts go into effect next January, Congress may pass a new deficit-reduction plan that avoids sequestration and enables another spending reduction mechanism—such as budget reconciliation, which would give Congressional committees power to determine how to cut spending within their jurisdictions. The primary motivation to pass a new plan would be avoid the automatic cuts to defense spending that are currently included in sequestration.

Enter the CHIMPS. Not the animals, but “changes in mandatory program spending’—a device sometimes used in appropriations bills to take money out of mandatory programs in order to reprogram the spending to bulk up discretionary ones. In the last two appropriations cycles, Congress has taken more than a billion and a half dollars out of farm bill conservation coffers normally controlled by the Agriculture Committee and reprogrammed it to food safety, food assistance and other matters considered higher priorities by the Appropriations Committee.

Timing for this year’s appropriations bill is murky as well. Many observers believe that while there will be action in both the House and the Senate to put together this year’s appropriations bills, final action will not occur until well after the beginning of the new fiscal year on October 1 and after the November elections. If that prediction proves correct, then a “continuing resolution” of some sort will be necessary to extend current funding authorities into the new fiscal year. In recent years, even normally simple continuing resolutions have proved the source of great controversy and upheaval, though the pending election season may keep these theatrics in check.

Every Bill is an Opportunity to Cut Spending

There is currently a culture in Congress to use every debate on every bill as an opportunity to cut federal spending, especially in the House, where there is a strong Tea Party-influenced contingent. This adds an extra element of the unknown, especially in farm bill politics, because it creates the opportunity for unlikely alliances—think Tea-Party-meets-farm-subsidy-reform-advocates—to succeed.

It is very hard to look into a crystal ball and predict how the budget factors will play out. While it might seem to make sense to wait for budget action—either through sequestration or through another mechanism—before writing the next farm bill, the longer the Committees wait, the more chances there are for Congress to cut agriculture spending and for there to be less money available to fund a new farm bill.

Senate Agriculture Committee Chairwoman Stabenow has been widely quoted as saying that the Senate farm bill process will build upon the proposal that the Chairs and Ranking Members pieced together for the failed Super Committee process. From what we know about that proposal, certain areas of the bill—such as the commodity title—were left in an unsatisfactory state last fall. The proposal also did not include important no-cost policy changes to several titles of the bill that are usually part of the farm bill reauthorization process. While the proposal did provide a budget framework for the farm bill, areas of unresolved differences mean that there is still a chunk of work to do before there is a full farm bill proposal for the Committees to consider.

Earlier this week, Chairwoman Stabenow announced four farm bill hearings for February and March—both signaling her commitment to getting a bill done this year and adding credence to the notion that the Senate will move before the House on farm bill.

While Chairwoman Stabenow has been vocal about her farm bill plans, House Agriculture Committee Chairman Frank Lucas (R-OK) has been more reserved. Last year, Chairman Lucas held a series of farm bill hearings intended to educate the many freshmen and new-comers to his Committee about the issues and process involved in a farm bill reauthorization. He has not yet announced any farm bill hearings in 2012 and has not indicated recently whether the farm bill proposal prepared for the Super Committee will be his starting point.

This week the major farm and commodity groups and associations met together to try to hammer out something closer to a unified position on the farm bill debate. By most accounts they did not succeed with respect to specifics, but they did issue a unity statement that emphasized the importance of moving the farm bill this year. The statement issued at the end of the meeting said, in part:

“Also confirmed is our common belief that Congress should pass and the president should sign a strong new farm bill into law this year. The law expires at the end of this year and producers—like all job creators—need certainty from Washington.”

At its own annual meeting in January, NSAC member organizations also supported an urgent call to Congress to pass the farm bill this year, without delay.

Stay tuned for our next post in this ongoing series, which will dive deeper into both the process and substance of the new farm bill.