What the 'Merchants of Doubt' Don't Want You to Know 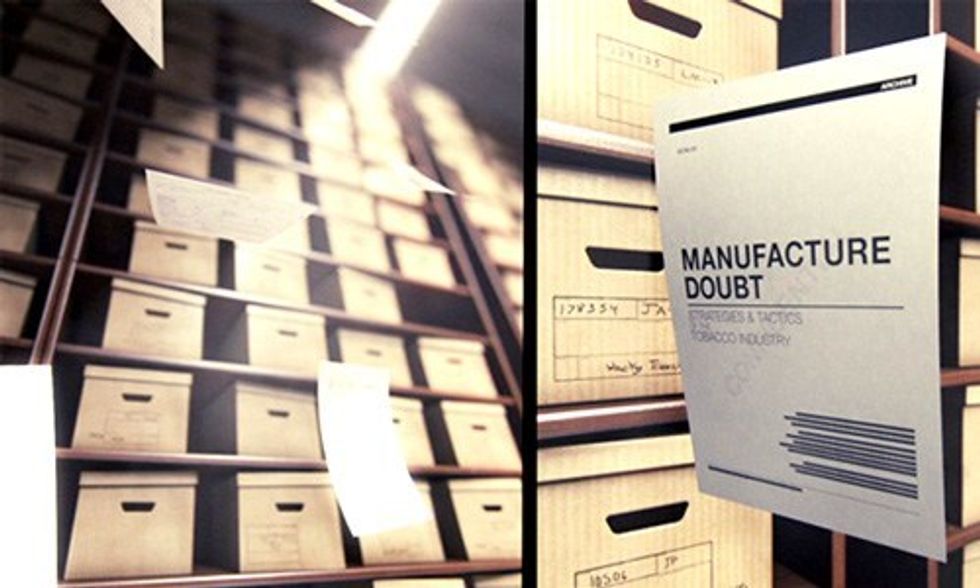 The new documentary film Merchants of Doubt—which lays bare the tactics used by the professional climate deniers paid to spread doubt and confusion about the reality of global warming—is essential viewing for everyone who cares about the fight for climate action. It’s even more essential for anyone who still isn’t sure whether climate change is really happening or primarily caused by human activities.

A brilliant disinformation campaign by the Merchants of Doubt has stoked public fears about the economic consequences of climate action and kept a fake debate alive—even though the scientific consensus is overwhelming that climate change is happening and humans are the reason why.

Directed by Robert Kenner, best known for his Oscar-nominated documentary Food, Inc., and based on the fine book by historians Naomi Oreskes and Erik M. Conway, Merchants of Doubt shows how the playbook developed by big American tobacco companies to deny the link between smoking and cancer has been redeployed by the fossil fuel lobby to deny the link between industrial emissions and climate change. Indeed, some of the most prominent climate change deniers are the very same people who spread doubt about the harmful effects of cigarettes decades ago.

It’s enough to make you want to holler: Scientists in the pay of fossil fuel companies; trumped-up petitions claiming scientists don’t really think the climate is warming; “independent” think tanks that are really just industry front groups; self-styled “experts” who are mostly expert at sandbagging real scientists and keeping doubt alive. But there’s one thing these Merchants of Doubt don’t want you to know: When the truth is accepted, Americans will demand action.

Before I worked for Environmental Defense Fund, I spent three years reporting on the professional deniers for my book The Climate War, a history of the great American struggle to get serious about climate change. I tracked many of the same people and groups that Kenner’s film exposes. And every once in a while, one of them would let down his guard (They are overwhelmingly male).

One of the professional deniers who surfaces in the movie is Myron Ebell of the industry-funded Competitive Enterprise Institute. For many years, Ebell’s full-time job has been to stave off climate action by keeping alive the impression that the scientific debate is wide open. During a conversation with me in 2008, Ebell cheerfully asserted that even if climate change were real, we shouldn’t bother doing anything about it (because by his logic it will be cheaper to act in 50 years—never mind that irreversible runaway climate change will have set in by then).

Then he made an astonishing admission.

“The public doesn’t agree with me,” he conceded. “They say, ‘If there is warming then we have a moral obligation to solve it. If there is not, then we don’t.’”

And that, in a nutshell, is what the denier PR machine doesn’t want you to know—and why the Merchants of Doubt have been working for so long to stir up doubts about the science. When Americans realize once and for all that climate change is real, they will demand action. “The science is still the battleground,” Ebell told me. “The battle is still over whether this is really happening and whether we are really causing it.”

And that’s the battle that Ebell and the other Merchants of Doubt are finally losing. Two powerful long-term trends are changing American attitudes:

1. A huge increase in destructive storms, droughts and heat waves made worse by climate change has people connecting the dots like never before—and realizing that we have to act on climate to protect our families and communities.

2. The rise of a clean energy economy that is creating good jobs for people has made the economic promise of the energy revolution tangible. Everyone knows that last century’s dirty economy can’t power our world throughout this new century. The good news is that the new economy is generating jobs along with carbon-free electricity and transportation. What seemed abstract just a few years ago is real—and people want more of it.

An overwhelming majority of Americans, including half of all Republicans, understand that climate change is real and support government action to address it. The Merchants of Doubt are losing the climate war.