What Standing Rock Gave the World 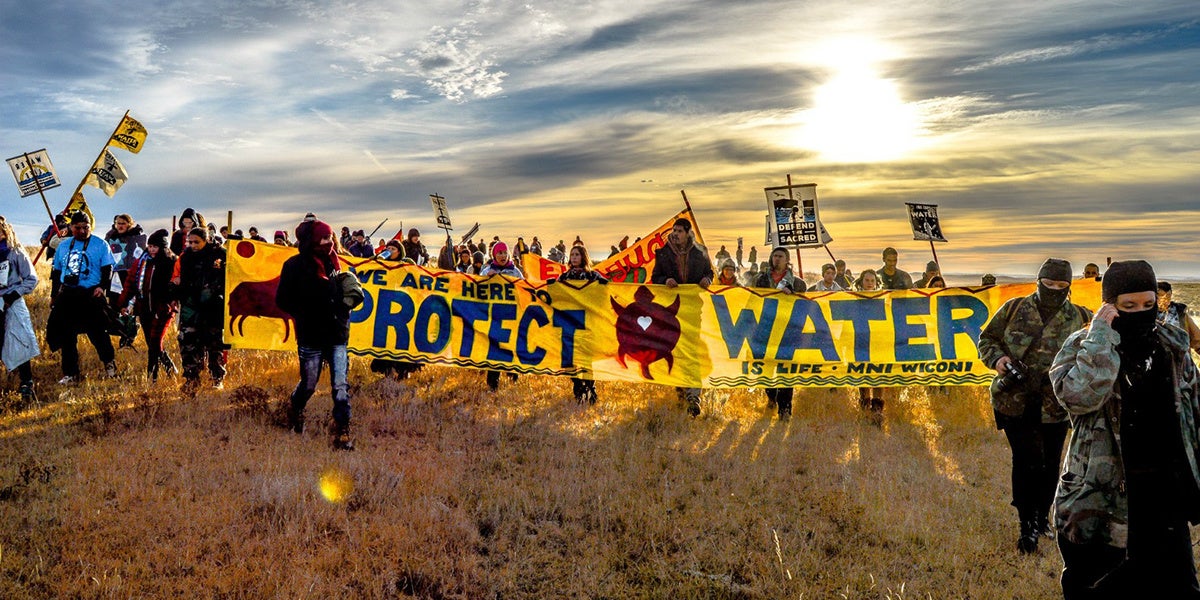 At the height of the movement at Standing Rock, Indigenous teens half a world away in Norway were tattooing their young bodies with an image of a black snake. Derived from Lakota prophecy, the creature had come to represent the controversial Dakota Access pipeline for the thousands of water protectors determined to try to stop it.

It was a show of international solidarity between the Indigenous Sami and the Lakota. “They got tattoos because of the Norwegian money invested in the pipeline,” said Jan Rune Måsø, editor of the Sami news division of Norway’s largest media company, NRK.

Rune Måsø said the story about the tattoos was just one of about a hundred that his team of journalists covered over the course of the months-long pipeline battle in North Dakota. One of them, “The War on the Black Snake,” was awarded top honors at a journalism conference held in Trømsø in November. That story revealed large investments Norwegian banks had made to advance the $3.8 billion energy project, spurring a divestment campaign by the Sami Parliament.

The backstory can be told simply. As early as April 2016, Indigenous activists protested the pipeline’s threat to the Standing Rock Sioux’s primary water supply, the Missouri River. While battles were fought in federal courts, representatives of hundreds of Indigenous groups from around the world—the Maori, the Sami and the Sarayaku, to name a few—arrived. Temporary communities of thousands were created on the reservation borderlands in nonviolent resistance against the crude oil project. Police arrested more than 800 people, and many water protectors faced attack dogs, concussion grenades, rubber bullets and, once, a water cannon on a freezing night in November. Last February, armored vehicles and police in riot gear cleared the last of the encampments. Recently, investigative journalism by The Intercept has documented that the paramilitary security firm TigerSwan was hired by DAPL parent Energy Transfer Partners to guide North Dakota law enforcement in treating the movement as a “national security threat.”

Oil now flows through the pipeline under the Missouri.

But this Indigenous-led disruption, the awakening resolve that was cultivated at Standing Rock, did not dissolve after February. Rather, it spread in so many different directions that we may never fully realize its reach. The spirit of resistance can easily be found in the half-dozen or so other pipeline battles across the United States. Beyond that, the movement amplified the greater struggle worldwide: treaty rights, sacred sites and the overall stand to protect Indigenous land and life.

To be sure, post-colonization has always demanded acknowledgment of Indigenous autonomy. It’s what spurred months of international advocacy when Haudenosaunee Chief Deskaheh attempted to speak before the League of Nations in Geneva, Switzerland, in 1923. He wanted to remind the world that European colonizers had honored Iroquois Confederacy nationhood upon entering treaty agreements under the two row wampum.

The stand at Standing Rock, then, was not anything new—just more modern.

Google the words “the next Standing Rock” and you get a smattering of circumstances, mostly posed in the form of a question: Bears Ears, Line 3, Yucca Mountain. “The Next Standing Rock?” the headlines ask.

The story of White Clay, Nebraska, is indicative. When the last tipis came down at Standing Rock, Clarence Matthew III, a middle-aged Sicangu Lakota man better known by his camp nickname, Curly, spared little time migrating to the South Dakota–Nebraska border. There, another fight for justice was mounting, for families living on the neighboring Pine Ridge Indian Reservation. This one focused on a decades-long dispute over beer sales targeted at Native American customers mostly prone to alcohol addiction.

Demands turned to broader issues: investigation of dozens of unsolved crimes in White Clay against Native Americans. “Once we got down there, they started telling us about the problems they’ve had, more than just alcohol, the murders, the rapes, and everything that was on the bad side of that alcohol problem,” Matthew said. “It just broke my heart to hear all that.”

Matthew had been caretaker of one of the main communities at Standing Rock, and he settled right in at Camp Justice at the edge of Pine Ridge. He was there with his “water protector family,” others who have adopted camping as an active form of protest.

For all the momentum that the resistance at Standing Rock brought, the Indigenous rights movement in the 21st century faces increasing challenges. Tribal nations tread cautiously under the administration of Donald Trump. Internationally, the militarized protection of extractive energy projects and theft of land persist, despite glaring media attention paid to the rising number of Indigenous peoples killed or jailed for their activism in the face of it.

In a final push for re-election last fall, Standing Rock’s Dave Archambault II gave what would be his last interview as chairman to tribal radio station KLND. Archambault used the airtime to speak matter-of-factly about how the movement had shifted the tribe’s potent public image away from the reservation. “It used to be cool to be Indian; now it’s cool to be from Standing Rock.:

“This movement was significant, not just for Standing Rock, but for all of Indian Country and around the world. We made some noise and now we’re starting to see other Indigenous communities rise up and say, Let us all speak now, and it’s pretty powerful and moving,” he said.

Less than a week later and on the same day that the state of North Dakota accepted a $15 million gift from Energy Transfer Partners, Archambault was unseated by former council member Mike Faith, who has said publicly that he believes the overall movement hurt Standing Rock’s economy and neglected daily life for tribal members.

The difference of opinion between the two leaders is a conflict that often lies at the heart of tribal community: protecting the Earth or protecting the Indigenous peoples.

On the eve of Thanksgiving 2017, when the Keystone pipeline ruptured and spilled 210,000 gallons of oil in neighboring South Dakota, the newly elected Faith remained notably silent while water protectors responded with outrage, most loudly, closest to home.

“Ironically, this week most Americans will be sitting down and giving thanks when last year at this time my people were being shot, gassed, and beaten for trying to keep this very thing from happening,” Chairman Harold Frazier from the neighboring Cheyenne River Sioux tribe said in a statement. Like Archambault and other tribal leaders, Frazier was arrested for participating in the Standing Rock occupation.

Leadership in the Indigenous world is not only a difficult balance, but also dangerous.

In Honduras, activist Bertha Zuniga Cáceres is fighting for Indigenous rights in one of the most militarized regions in the world. She is the daughter of Berta Cáceres, the Indigenous Lenca woman who was assassinated after leading a successful campaign to halt construction of the Agua Zarca Dam. Now she is seeking justice for her mother’s death.

The 26-year-old Cáceres is also campaigning to suspend all U.S. military aid to Honduras. In July, she survived an attack by a group of assailants wielding machetes. Just weeks earlier she had been named the new leader of the Council of Popular and Indigenous Organizations of Honduras, the nonprofit organization formerly led by her mother.

“Many organizations, many NGOs, many Indigenous groups are struggling in how to sustain the work that they are doing in the face of these attacks,” said Katharina Rall, a researcher for Human Rights Watch.

Last year, after the military-style assaults on the camps at Standing Rock, Human Rights Watch expanded its agenda to include a program focused on the environment as a human right. “The fact that we now have an environment and human rights program at our organization is a reflection of this reality that a lot of people face,” Rall said.

Meantime, the organization Global Witness reports that it has never been deadlier to take a stand against companies that steal land and destroy the Earth. In 2016, the watchdog group found that nearly four activists a week are murdered fighting against mining, logging, and other extractive resource development.

As disturbing as this reality is, it is unsurprising then to recall the military-style violence at Standing Rock: the rows of riot police pointing their guns at unarmed activists standing in the river; tanks shooting water in freezing temperatures at a crowd of people gathered on a bridge. In this one regard, Standing Rock was not unique in the world. It had become crucially important. Americans saw the global struggle faced by the estimated 370 million Indigenous people—the violence, stolen resources, colluding corporations and governments that go hand in hand with protecting the Earth.

Sustaining this awakening is the next great task.

Climate change poses one of the most serious reminders of why the sacred fires ignited at Standing Rock must continue to burn: Indigenous peoples and their knowledge and value systems matter.

At November’s COP23 climate conference in Bonn, Germany, Hindou Oumarou Ibrahim was dressed in traditional Mbororo regalia when she stood in a conference hall demanding that Indigenous knowledge systems be properly acknowledged in Paris Agreement negotiations. The girl who once tended cattle in the region of Chad bordering northeastern Nigeria has now become a bridge for her people and government officials making decisions impacting the fragile ecosystem of Lake Chad, the lifeline for the Mbororo.

“Traditional knowledge has kept us from century to century to be in harmony with Mother Earth,” Ibrahim said. “These knowledges will make for all the difference, but we cannot wait years and years, because climate is changing, and it’s impacting the Earth.”

Other members of the Indigenous Caucus at Bonn say inserting traditional knowledge into the climate talks doesn’t go far enough. Jannie Staffansson, a representative of the Saami Council, wants what Chief Deskaheh had petitioned to the League of Nations nearly a century earlier: sovereign recognition for Indigenous Peoples on an international scale. It would allow equity at the negotiating table—a level playing field to fairly deal with the consequences of a warming planet in the face of land grabs and natural resource extraction.

“Why is it always that Indigenous peoples need to pay for other people’s wealth?” said Staffansson. She paused to check the Snapchat account she had been using to engage with a young Sami audience while at COP, a demographic similar to the teens who got tattoos of the black snake.

“I had friends that went to Standing Rock,” said the 27-year-old. “I was envious of their trip to support self-determination. Self-determination and a just transition is what we have to take into account.”

“We need climate justice in everything we do.”