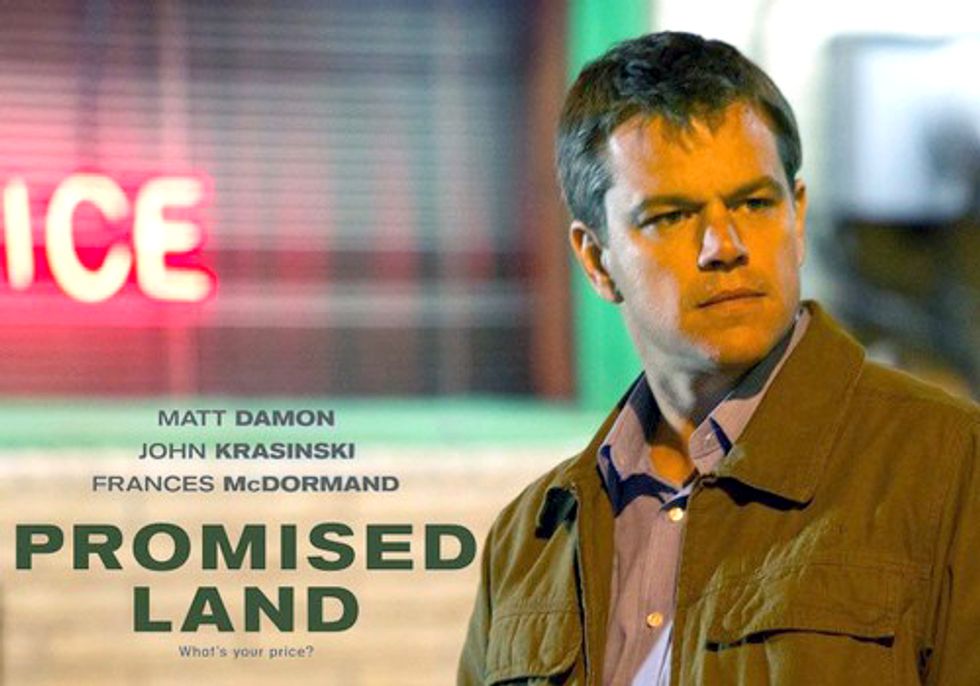 , the new movie starring Matt Damon, is a movie in part about fracking, the new and extremely problematic way of getting natural gas out of shale rock far below the earth’s surface. It’s a very good movie, with good acting, particularly by Damon in a very different role than, for example, his Jason Bourne trilogy. Instead of  being a kick-ass former CIA assassin on a mission to reclaim his memory and the truth about what was done to him, in Promised Land Damon is a conflicted, conscience-stricken, corporate hot shot “land man” using bribes and threats, when necessary, to get people in a small, rural town to agree to let their town be fracked.

But the movie in no way presents all, or even most, of the many problems that come with fracking, much less do so in a clear and convincing way. The primary problem it does present is the very real one of contamination of land and water. This happens as a result of the toxic chemicals, mixed with water and sand, that are forced down into the shale under heavy pressure to break the rock and release the gas within it. Some of that toxic mix comes back up, along with methane, the primary ingredient of natural gas, and there are huge numbers of specific instances of plant and animal deaths, human sickness and water poisoning afterwards that are clear proof of this serious problem.

But there are many more problems from fracking that Promised Land doesn’t mention, much less explain.

So if you are looking for a movie about all of these negative realities of fracking, Promised Land is not the movie to watch.

Promised Land is in many ways more a movie about corporate power and the ideology that undergirds it versus the power of an informed people and the old-but-still-good values of love for family, land, home and the truth. The energy company that Damon works for is thoroughly despicable, while individual people who work for it like Damon and the character played by Frances McDormand are shown as more complex, still human, less corporatist in their ideology.

One small but telling example is when a youngish man overly excited about the potential riches he thinks he will gain from signing a lease drives up to Damon in a fancy new car. Because of a prior scene, the movie audience knows that the money he will get from the gas under his land, if there is any, will probably not pay for this car. At the time Damon is struggling with his conscience, and as he looks at the expensive car and the young man you can almost feel his angst, his guilt over what he may have done.

Hal Holbrook is effective as a smart and articulate older teacher who is the only townsperson, at first, aware of some of fracking’s dangers and willing to stand up and say so publicly. Unfortunately, when he does so for the first time, he also describes gas as “clean,” which it absolutely isn’t. He does, however, play a key role in the movie’s successful effort to counterpose a life of place, community and eternal values against the scheming and greed-driven corporate culture that has no difficulty destroying anything in its way.

There’s a lot of food for thought in Promised Land, and I hope large numbers of people see it.