What is the Future of the Keystone XL Pipeline with Obama in the White House for Four More Years? 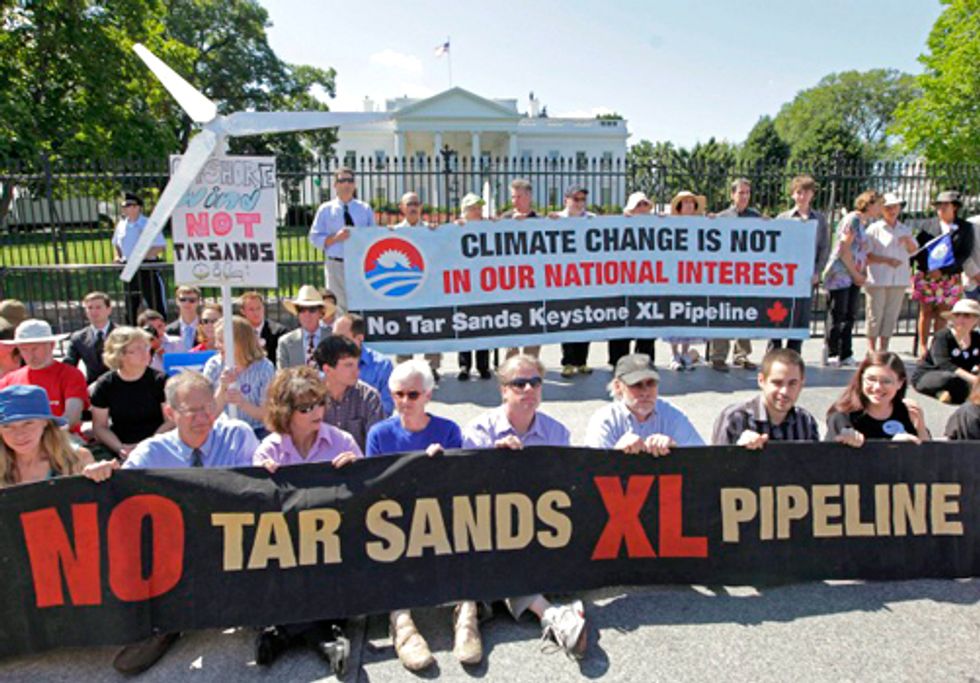 Over the course of a two-week sit-in from Aug. 20 to Sept. 1, 2011, more than 1,200 people were arrested in front of the White House protesting the Keystone XL pipeline, a 1,700-mile-long pipeline that would carry oil from the tar sands in Alberta, Canada, to the U.S. Gulf Coast.

Immediately after the U.S. election, Canadian Minister Joe Oliver said that he fully expected the Keystone XL tar sands pipeline to be approved by the reelected Obama administration. This is wishful thinking on the part of the Canadian federal government. Approval of the Keystone XL tar sands pipeline is certainly not a given, especially when a second term for President Barack Obama is going to mean a strong commitment to fighting climate change pollution and promoting clean energy choices.

More than ever, Canada’s current approach to energy development—which strongly favors a massive build up of tar sands production—is at odds with America’s path. The Obama administration has already moved forward with an energy agenda that has, for example, resulted in historic fuel efficiency standards significantly reducing demand for oil and proposed carbon pollution limits for new power plants. And we can expect more in this second term.

The fossil fuel industry put energy front and center in this past election cycle—and the American people voted for clean energy over dirty energy. With many are still suffering in the devastation left by Hurricane Sandy, Americans are more aware than ever of the high cost of climate change to our families and communities. So as Canada is asking what Obama’s second term could mean for tar sands, here are a few trends to watch:

Americans are looking for action on climate and energy:
Americans are more and more concerned about climate. Two-thirds of Americans are concerned about global warming. With the endorsement of national leaders like New York Mayor Michael Bloomberg, Obama will be increasingly expected to place its climate policies as a priority. In a recent poll, 9 out of 10 registered voters want the U.S. to develop and use solar power. More than 90 percent of car owners in the U.S. want to see stricter fuel-economy standards. Climate activists across the U.S. continue to view dirty fuels and the question of whether to approve the proposed Keystone XL tar sands pipeline as a major climate decision and are already organizing to deliver a message to the administration to tell the President that he has support to reject this dirty energy project.

There will be a detailed review to evaluate the Keystone XL tar sands pipeline:
The Obama administration is in the middle of the environmental review for the pipeline. The American public expects a rigorous review that includes climate impacts especially as the previous State Department assessment was seriously flawed. The Obama administration has already committed to completing a rigorous review. As such, any decision on the pipeline will not likely occur until early to mid 2013. Earlier this year, President Obama said:

I think the prime minister and our Canadian friends understand that it's important for us to make sure that all the questions regarding the project are properly understood, especially its impact on our environment and the health and safety of the American people….[Keystone XL] is a big project with big consequences. We've seen Democrats and Republicans express concerns about it. And it is my job as president of the United States to make sure that a process is followed that examines all the options, looks at all the consequences before a decision is made.

There is more awareness that tar sands development at odds with protecting the climate:
Canada’s aggressive push to expand controversial tar sands development from the current 2 million barrels a day to 5 million barrels by 2035 and 9 million in the longer term is increasingly viewed as completely counter to protecting the climate. Canada’s Conference Board, a national think tank, has acknowledged that if the world were to adopt policies to keep the warming of the planet below 2 degrees C⁰, that the demand for tars sands oil would drop dramatically. Some of America’s more prominent scientists are now saying that to combat global warming we must reject projects like the Keystone XL tar sands pipeline.

The Harper administration approach is at odds with the Obama administration:
Prime Minister Harper has taken a completely different approach to energy and climate than the Obama administration. In addition to its achievements to combat climate from cars and power plants, the Obama administration has already proposed the conservative Supreme court-mandated first-ever national limits on carbon pollution from new power plants. And the next step will be for the U.S. Environmental Protection Agency to adopt these new protections and to develop limits on existing power plant pollution as well. As the Obama administration is likely to ramp up its climate priorities for the second term, it is no secret that neither Alberta nor the federal Canadian government has policies in place to address the rapid growth of tar sands emissions. In fact, the policies that have been adopted and promoted are geared to push for expansion tar sands development and undermine the already weak environmental protections. The Pembina Institute has pointed out that not only is Alberta’s plan weak but that the federal plan is completely out of step with the nation’s climate commitments.

Americans are concerned about tar sands not just pipelines:
Some in Canada may view opposition to Keystone XL as merely a local issue in Nebraska or Texas where citizens are concerned about dangerous pipeline spills.  Indeed, communities across the U.S. are opposing new or expanded tar sands pipelines because they fear a devastating tar sands oil spill such as the one that occurred in Michigan in 2010 that is still not cleaned up after two years. But, in fact, there is now a national movement against the growing reliance on Canadian tar sands that can be found in every corner of the U.S. with the vast majority concerned about the climate impacts. This movement will only grow in size and impact given the tar sands industry’s push to expand new pipelines into the U.S.

Canadians are already very concerned about global warming. But the track being taken by the Harper government does not represent many Canadians’ hope for aggressive action. By focusing on a national energy strategy that promotes tar sands development as a priority over investments in clean energy and a strong climate plan, the Harper government has put Canada on a different path from the U.S.—taking the country backwards. The new Obama administration should be an opportunity for Canadians and Americans to work together to fight climate change and support clean energy.