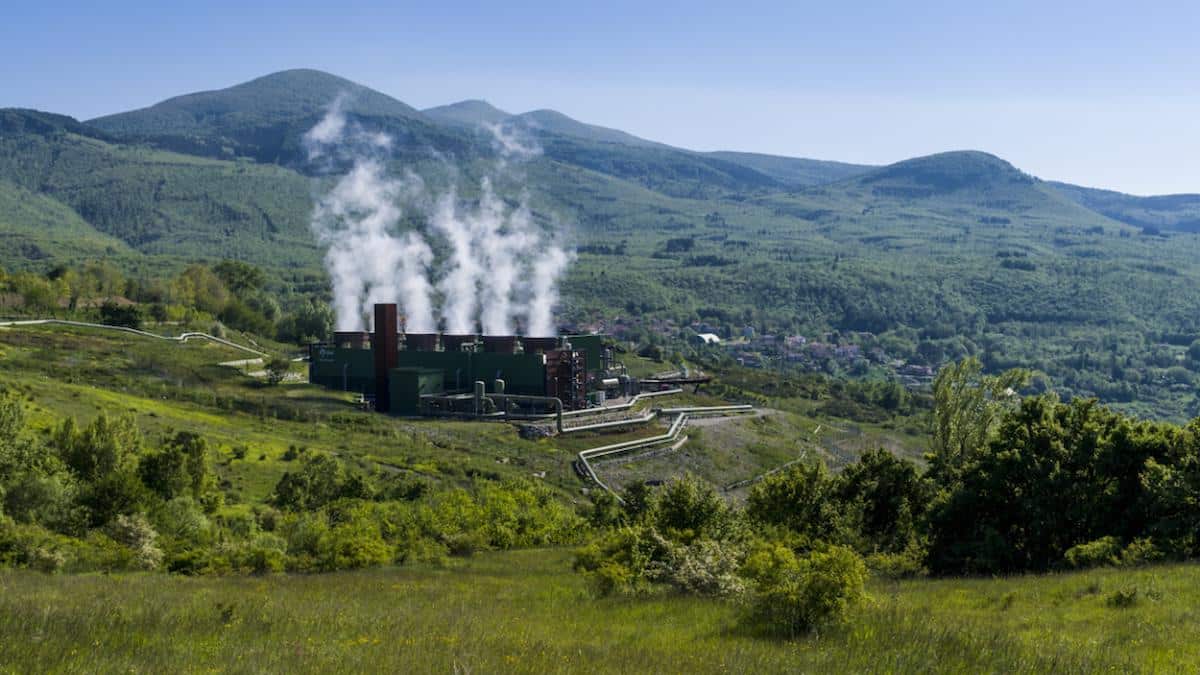 Geothermal energy takes advantage of the heat under your feet in order to charge your devices and keep your home toasty in colder months. But given the relative lack of attention the energy source receives compared to other generation resources, let’s examine the basics.

Geothermal power generation is a method of producing electricity. By tapping into the inner Earth, we can leverage the planet’s thermal energy to spin a turbine generator with steam.

Earth’s interior is made up of several layers, including an inner core of solid iron, an outer core of magma, a mantle of both magma and rock, and the solid-rock crust that you’re living on right now. Energy developers bore down several kilometers into the ground and construct wells to allow steam to travel up from a potential geothermal reservoir.

Depending on the type of power plant, the process and necessary infrastructure changes. The National Renewable Energy Laboratory, or NREL, says there are three types of geothermal power plants.

With a dry steam power plant, “the steam is piped directly from underground wells to the power plant,” basically taking advantage of where the steam naturally spews out of the earth without much intervention, according to the lab. That geothermal power plant style is rare, explained Maurice Dusseault, a geothermal energy expert and professor at the University of Waterloo. The largest of that type of generation facility is also the largest geothermal power plant in the world: the Geysers Geothermal Complex north of San Francisco.

Then there’s flash steam power plants, a process that the NREL calls the “most common” form of geothermal power production. Geothermal fluids are pumped up a pressurized well to an above-ground chamber, where the fluids vaporize into steam.

One type of binary cycle generation is known as an enhanced geothermal system.

“We use [EGS] to refer to trying to get the heat energy out of deep, low permeability, low porosity rocks that do not contain fluids in any significant amount, like in New Hampshire, Maine and Massachusetts,” said Dusseault.

Geothermal energy isn’t only used for electricity production — it can also be used to warm your home in lieu of home heating fuels through an on-site pump. Some cities, like the Icelandic capital Reykjavík, heat all of their buildings with geothermal energy. And, of course, geothermal reservoirs can heat pools of water and create relaxing hot springs and form geysers that spew extraordinarily hot water into the air.

What Makes a Site Suitable for Geothermal Energy?

To rotate a turbine generator, enough steam and hot water — a mixture referred to as geothermal fluids — has to be present in a geothermal reservoir and able to be siphoned in order to transfigure that thermal energy into electricity.

A reservoir also has to be hot enough to make the endeavor worth it, and any rock needs to be permeable enough to allow the geothermal fluids to move, according to the U.S. Department of Energy’s Office of Energy Efficiency & Renewable Energy. The deeper into the earth you are, the hotter the temperature is.

“But in a place like Maine… there are no hotspots and there are very few sediments,” explained Dusseault. “If you want to try to access high temperatures, now you have to drill down five or six or seven kilometers through hard rock. And that gets expensive.”

But what even is a hotspot? Dusseault says that will depend on who you ask and what your purpose is. If you’re looking to generate electricity at economically realistic prices, the temperatures that you consider for such a project are going to be extremely high and easily accessible. But if you’re looking to use the geothermal energy for heating purposes in an area of the country with less proximity to high-heat fluid, a developer might consider areas with relatively lower temperatures in types of rock that are more difficult to penetrate.

Within the U.S., few hotspots exist outside of the West coast states, with the easternmost geothermal hotspot located in Wyoming’s Yellowstone National Park, according to Dusseault. That means that the bulk of U.S. geothermal power plants are found in California, Nevada, Utah and Hawaii.

Still, the U.S. leads the world’s geothermal energy production, even if U.S. Energy Information Administration data show that such production only accounts for 0.4% of total U.S. utility-scale electricity generation. Other federal estimates suggest geothermal energy could develop at a rate of 2% per year going forward; geothermal electric generation is forecast to rise from 16 billion kWh in 2019 to 52.2 billion kWh by 2050, or a 226.25% increase over 31 years.

In 2019, 72% of installed geothermal electricity capacity across the planet came from six countries: the U.S., Indonesia, the Philippines, Turkey, Mexico and New Zealand, according to International Renewable Energy Agency data cited by the University of Michigan.

But looking forward to 2022, just four countries 一 Indonesia, Kenya, Turkey and the Philippines 一 will account for roughly two-thirds of that new capacity. The International Energy Agency’s Renewables 2020 report predicts that global cumulative geothermal capacity will increase 7% to 16.5 GW by that year.

Further, the IEA report notes that if Indonesia in particular can overcome numerous domestic energy and environment concerns, such as low energy prices and a lack of investment, the country “could have as much accumulated installed capacity as the [U.S.] by 2025.”

Even without human development, geothermal energy bubbles up to the earth’s surface through volcanoes, hot springs and geysers. In the Pacific Ocean, for example, the seismically active Ring of Fire is a well-known geothermal hotspot that follows the border of several tectonic plates. Subsequently, the region has the most volcanoes and earthquakes on Earth, according to National Geographic.

Geothermal energy production has few reported drawbacks, making it one of the safest energy sources both for workers and the environment. Siphoning electricity and heat from the virtually unlimited thermal energy of the earth’s core comes with few emissions, low costs and long-term stability.

However, most geothermal reservoirs aren’t easily accessible, increasing the engineering challenges involved and necessitating the use of techniques like the enhanced geothermal systems approach. That approach is similar to the methods used in hydraulic fracking, the controversial oil and gas extraction process.

There are several differences, including the way the fractures are made, according to Dusseault, who believes that “the dangers of hydraulic fracturing have been massively, massively exaggerated.”

With EGS, the fractures are made to create a single pathway between wells, whereas with natural gas fracking, a developer is creating numerous fractures from that single well. Either way, that fracturing process has raised concerns among some experts over potentially increased earthquake activity.

Enhanced geothermal systems have already been blamed for devastating earthquakes in some countries. In 2019, the South Korean government conceded that a 5.4-magnitude earthquake that injured dozens of people and caused $290 million in damage in the city of Pohang was the result of an operational EGS power plant nearby.