What If a Tar Sands Oil Spill Happened Today? 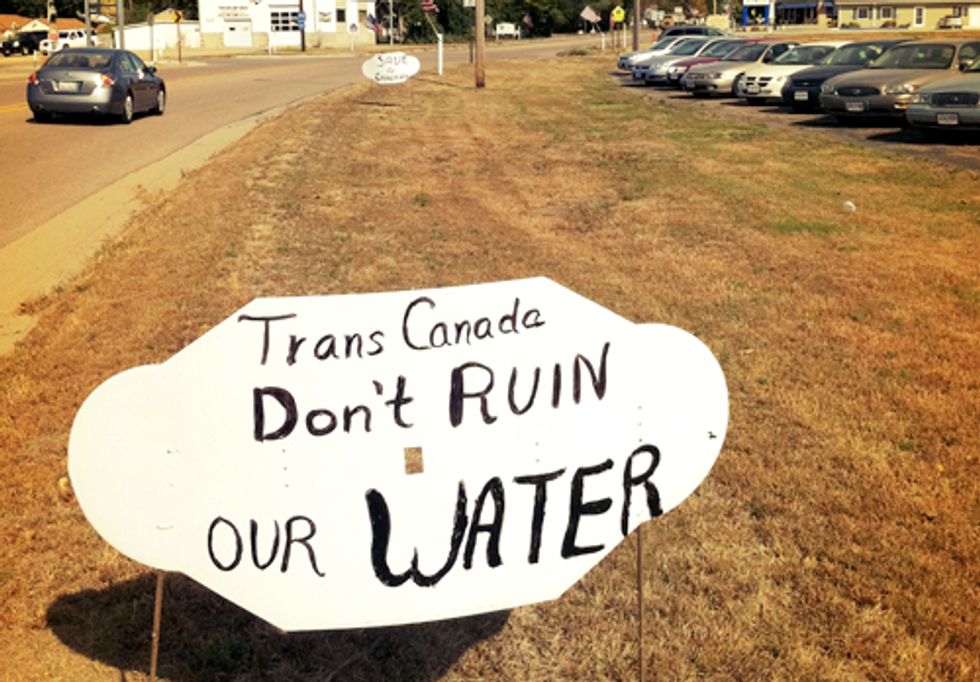 The worst tar sands spill seen in the U.S. happened two years ago in Marshall, Mich. Inside Climate is running a three-part series documenting the stories of families impacted by the devastating spill and how unprepared local, state and national officials are for tar sands.

We are not dealing with traditional crude oil. Tar sands—also known as dilbit—is more toxic, more difficult to clean up and worse for our natural resources.

This has us wondering, how prepared are we in Nebraska? What if a tar sands spill happened today on TransCanada’s Keystone 1 tar sands pipeline located along the eastern part of our state?

We have asked these questions for almost three years and have no clear answers from TransCanada or our elected officials. In fact, we are told by TransCanada, since they run the "safest pipeline" in the world and they have "proven and tested techniques" for cleanup, we should feel comfortable with this "detailed info" they have given citizens, landowners, elected officials, local and state agencies and first responders to date.

Fact is, no one (and please prove me wrong, I welcome it) has detailed information from TransCanada. Local responders and landowners do not even have the Material Safety Data Sheet (MSDS) sheet that is a critical piece of info needed for planning and responding. When TransCanada is pushed to give it to citizens and landowners, they tell us "for security reasons" we cannot give it to you or "for proprietary reasons" we cannot give it to you. This is unacceptable. There are federal "Right to Know" laws and we need our state senators to step up and get this information. If TransCanada has "proven and tested techniques" to clean up tar sands from the aquifer, show it to us. Maybe they could be "good neighbors" and give it to the U.S. Environmental Protection Agency (EPA) and Enbridge also since they clearly do not have the solution for cleaning up tar sands.

But, will Nebraska elected officials finally admit we as a state are unprepared and will they stop taking TransCanada's word and finally put state and local plans and laws on the books to protect citizens, landowners and our natural resources? Or will we have to wait for a disaster for them to act?

Even PHMSA, Congress and the Canadian government have admitted there are no national long-term, peer-reviewed studies on the impact of tar sands on water supplies and the corrosive impacts of tar sands in traditional pipeline infrastructure. PHMSA is conducting a study now, which is due out next year.

In Nebraska, we do have a state-based study that was peer-reviewed and written by Dr. Stansbury from UNL that clearly outlines the risks to the Ogallala Aquifer. Instead of building on this science-based report, TransCanada, Nebraska officials and even the U.S. State Department dismiss the red flags raised in this report about this tar sands pipeline.

Susan Connelly is a mom from Marshall that will not rest until questions are answered and our country has a better plan than "trust us" when it comes to tar sands. At a congressional hearing, Susan confirmed many of our concerns about local response and training:

"When the spill occurred in my hometown, first responders and county health officials were caught off guard. A lack of training, lack of communication and the failure to properly evacuate residents, coupled with all of the unknowns, led to this truly tragic event. I say unknown because this spill was the first of its kind. I find it unconscionable that the health and well-being of our environment and citizens have been set aside for the sake of tar sands oil, which little is known about the effects at this time."

The Inside Climate report contains critical red flags and information for our state, including:

Joe Moller is a landowner in the proposed route of TransCanada's second pipeline—Keystone XL—and a Nebraska volunteer firefighter for more than 30 years and former pipeline worker. Joe confirmed to Bold Nebraska that even the Nebraska Fire Marshall does not have the MSDS sheet for TransCanada's pipeline leaving first responders at risk and local citizens in danger. About two years ago we called the Fire Marshall's office and they informed us while the Unicameral gave them legal authority on gas pipelines, they have no legal authority when it comes to oil pipelines. Which is probably why you see no listed oil pipeline safety training sessions listed on the PHMSA website for our state.

"With TransCanada's history of spills, our local first responders need not only the MSDS but also proper training and equipment to handle a tar sands spill or fire. We don't know if we need self-contained breathing apparatus or Level A hazmat suits when dealing with tar sands and the chemicals involved. Given the basic fact that it will take TransCanada's emergency crew anywhere from 3-12 hours to get on site and given the tragedy we saw in Michigan with local folks not having the proper information, it is time we hold TransCanada accountable and protect our state."

TransCanada's pipeline is not a pipeline for the people. It's a risky pipeline for their profit. It's an export pipeline without a drop dedicated to the U.S. At some point our elected officials have to stop listening to the fancy TransCanada lobbyists and television ads and start protecting landowner rights and our natural resources, especially our water.

We have a choice because we do not need tar sands. Period. We can get on an energy path that meets our country's needs without sacrificing our families health, natural resources and our local economic activity. We are not here to help out TransCanada and other tar sands companies who have invested in this extreme energy. We are here to protect our families, our economic activity and our natural resources. We can live without toxic tar sands. We cannot live with toxic water.