What Fracking and Mountaintop Removal Coal Mining have in Common 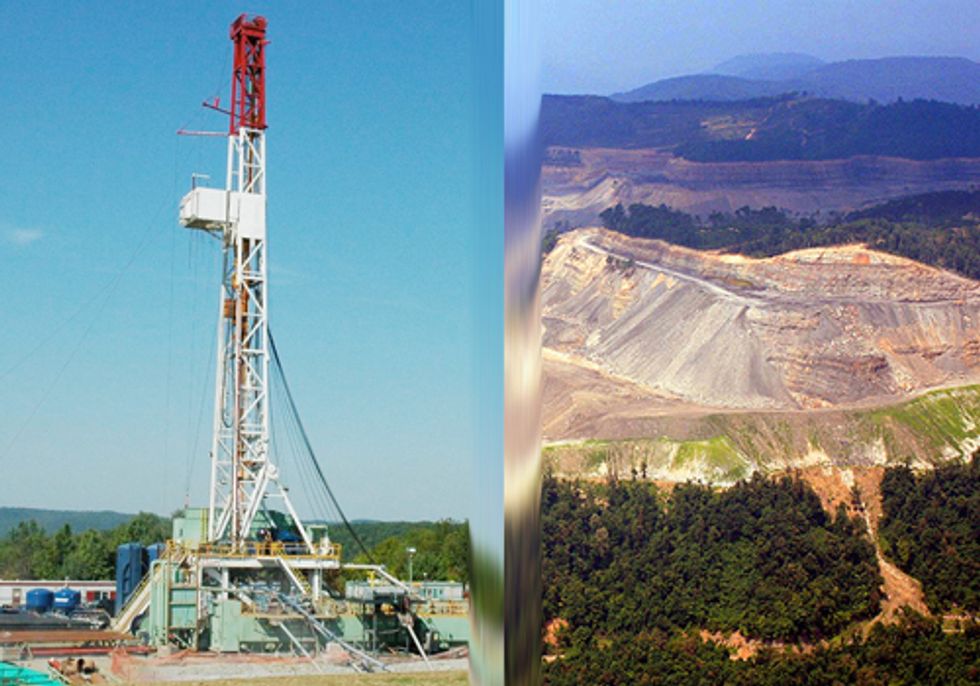 Erie, CO meet Naoma, WV. Though seemingly different battles over different ecologically hazardous extractive processes—hydraulic fracturing ("fracking") for unconventional gas versus mountaintop removal for coal—the two battles are one in the same and direct parallels of one another.

On June 2, a coalition of activist organizations led by Erie Rising and joined by the likes of the Sierra Club, the Mark Ruffalo-lead Water Defense, the Angela Monti Fox-lead Mothers Project (mother of "Gasland" Producer and Director, Josh Fox), Food and Water Watch (FWW), among others, will take to Erie, CO to say "leave and leave now" to EnCana Corporation.

EnCana has big plans to drill baby drill in Erie.

It "plans to frack for natural gas near three local schools and a childcare center," according to a press release disseminated by FWW. "On June 2, the event in Erie will give voice to those immediately affected by fracking there, and to all Americans marred by the process, becoming ground zero for the national movement to expose the dangers associated with fracking."

The action is a simple one: a "rally and vigil to protest gas industry giant Encana’s plans to frack for natural gas near Red Hawk Elementary, Erie Elementary, Erie Middle School and Exploring Minds Childcare Center and transport toxic fracking by-products on roads that come within feet of these and other community schools," reads the FWW press release.

Actor and head of Water Defense, Mark Ruffalo, had this to say in The Denver Post of the upcoming action:

Erie Rising's struggle to protect children from the imminent danger of fracking is urgent. Encana wants to begin drilling by the schools early this summer, subjecting the town's children to the dangerous carcinogens that appear to have already caused so much illness.

On June 2, Erie Rising is holding a rally in opposition to the wells by the school. Erie Rising's members still have a long fight to protect their kids, but they are exposing the claim of clean natural gas as a dirty lie. It's a struggle that is paving the way for mothers across the nation to stand up and fight for their own children's future.

Colorado was one of the first two states (Texas being the other) where Halliburton (of "Halliburton Loophole" fame) chose to test its new horizontal drilling method in 1949, Sam Schabacker, Mountain West Region Director for FWW explained to DeSmogBlog in an interview. Colorado is home of the Niobrara Shale basin. Its Governor is a Democrat, John Hickenlooper, who in his former career was a petroleum geologist, working for Buckhorn Petroleum.

Hickenlooper was involved in a scandal in March of this year, appearing in a pro-fracking ad and making himself a de facto industry spokesman for the sector in which he was formerly employed. For his antics, he was called out by both the Republic Report and Think Progress. Think Progress reported,

Hickenlooper’s background and track record may indicate why he has failed this test of good government…He took $73,666 from oil and gas interests in his 2010 election, and as Salon points out, appointed an industry campaign donor to an important regulatory position.

According to FollowTheMoney.org, the oil and gas industry has also given more than $150,000 to candidates on both sides of the aisle running for seats in the Colorado House and Senate in the past two election cycles, 2010 and 2012, combined. With political circumstances such as these, it's perhaps no wonder people have stood up and decided to fight back. What other choice do they have?

"This encroachment of residential areas has really woken up a grassroots revolt of regular Coloradans who are standing up and saying don't come in my backyard," said Schabacker in an interview. "And that's really what's going on in Erie. This is Exhibit A of how the gas industry has cavelierly expanded into residential areas against the wishes of local governments and regular Coloradans."

"And so we're drawing a line in the sand [on this one]…and that's really what this fight is all about," he continued. "It's mothers' standing up to protect their children in their community."

Not only have communities around the U.S. been fighting back against the gas industry's proposals to frack in the areas surrounding schoolyards and universities, but similar battles have also been waged by activists against the coal industry in the recent past, as well.

Exhibit A of this fight was the recent prolonged fight in Naoma, WV against King Coal giant Massey Energy in the past several years pertaining to its coal mountaintop removal extraction site in close proximity to Marsh Fork Elementary School.

The Fight Back Against Massey and Marsh Fork Elementary School: A Redux

The community surrounding Marsh Fork Elementary School in Naoma, WV was also home to aggressive activism, this time a fight back against coal industry giant Massey Energy, then led by now-retired CEO Don Blankenship. The battle royale itself inspired many documentary films featuring it, including "The Last Mountain," which featured Bobby Kennedy Jr., "On Coal River," "Mountain Top Removal," and others. DeSmogBlog has written about the fight, as well.

In a nutshell, the community surrounding Marsh Fork was turned upside down by Massey at its Upper Big Branch Mine project, which involved contaminated air and water and left children susceptible to developing Black Lung and various cancers and other illnesses as they grew older. A summary of the milleux that occurred in the area, appearing in the film "Mountain Top Removal," can be seen below.

Like the battle in Erie of today, the battle in Naoma involved, as Schabacker put it in his interview, "mothers' standing up to protect their children in their community." Ted Nace, Director of Coalswarm, a project on the Center for Media and Democracy's Sourcewatch project and author of the book Climate Hope: On the Front Lines of the Fight Against Coal, told DeSmogBlog in an interview that it is these types of battles that win the hearts and minds of regular everyday people.

"Those people who think about building movements should keep their eyes open to such cases. People at the local level are also looking to get visibility for their community. And I do think one of the big dimensions of environmental activism is finding stories that resonate for people. It's a lot easier for people to comprehend a story that involves other peoples' families than it is to understand a story about some unpronouncable chemical."

Eventually, after a long, hard grassroots fight, often involving civil disobedience, Massey Energy (with financial help from the Annenberg Foundation) was pressured into building a new school for the community away from the Upper Big Branch Mine.

Time will tell whether Erie sees similar success. The parallel, at the very least, is an interesting one.