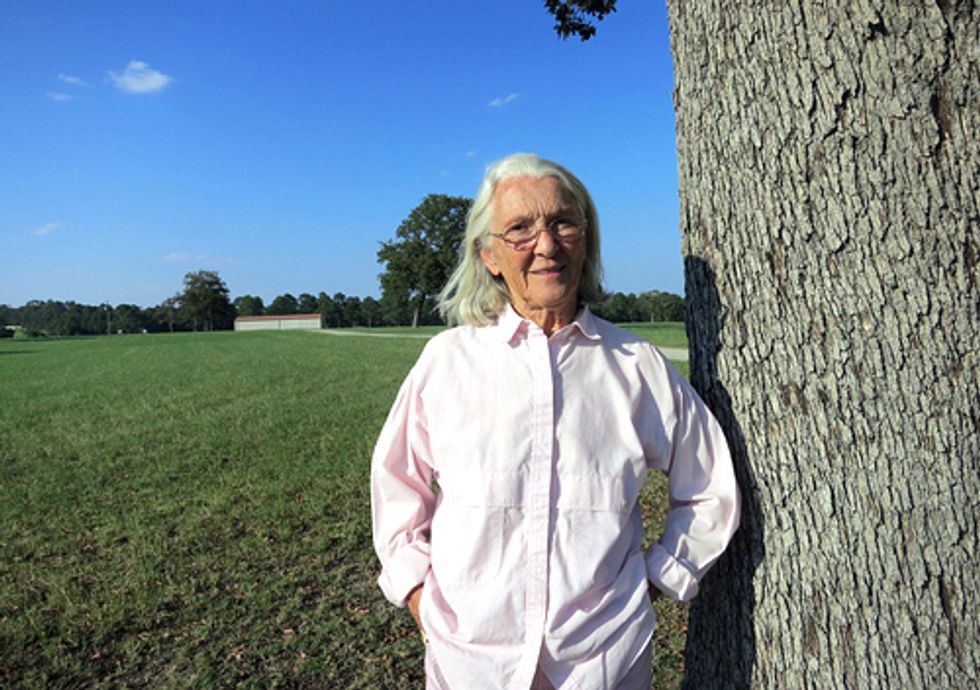 Eleanor Fairchild on her 300-acre farm outside of Winnsboro, Texas. She has tried everything to prevent the destruction of her land by TransCanada's Keystone XL pipeline.

Everyone who meets Eleanor Fairchild will tell you that she doesn’t seem like she’s a day over 50. She turned 78 last month. A year ago on her 77th birthday she was arrested along with 1,252 other people during the peaceful sit-ins in front of the White House to stop Keystone XL. She has done everything she can to prevent the destruction of her land by TransCanada, dreading the day when they would start plowing through her 300 acre farm outside Winnsboro, Texas.

That day came this last Saturday when, unannounced, TransCanada arrived on her land with heavy machinery and began tearing up the ground and clear-cutting every tree in their path. She heard the roar of the machinery from inside her home and rushed toward the machines to stop them, but at that point there was nothing she could do but watch them destroy her beloved farm.

Eleanor knows what’s at stake with the Keystone XL. When she first heard the words “Keystone XL” she started researching and was horrified to learn the contents of the toxic sludge they wanted to pump through the pipes. Her land is home to lush wetland ecosystems and multiple natural, fresh water springs that flow with more than 400 gallons of fresh water every minute. Every last drop of it stands to be poisoned by this toxic pipeline.

Knowing the risks to her land and her safety she refused to sell any of it to this multi-national corporation and never signed a single contract. So they took it from her. Unable to acquire her land through the coercive tactics TransCanada had used on countless other landowners they expropriated it through eminent domain.

“I hate to see my land torn up, but I realize at this point that there’s nothing I can do,” she said. “I’m concerned about everyone’s land because a lot of people are being hurt a lot more than I am, and it just breaks my heart.”

In the end it’s going to take a lot more than TransCanada’s bulldozers to deter a brilliant, tough spirit like Eleanor’s, and in the meantime she’ll be waiting in her home and praying for them to go away.

This is why we blockade. We’re here to stand with landowners like Eleanor who feel they don’t have any options left to defend their homes.

One great example of this tremendous effort by activists to stop the Keystone XL pipeline is the work of Maggie Gorry.

48 hours ago lifelong Texan Maggie Gorry—whom we had previously called Mary Germanati to legally protect her identity—climbed a 40-foot timber pole in the pathway of the Keystone XL clear-cut to prevent TransCanada’s heavy machinery from operating dangerously close to her eight friends in the tree blockade. After her courageous stand that delayed further clear-cutting operations on the site for two entire days, Maggie descended from her perch early this morning and was arrested.

Maggie decided to take direct action in response to TransCanada’s audacious move on Monday, when they expanded their clear-cut outside the designated easement, deliberately endangering the safety of her friends in the blockade.

In the dark and early hours of Tuesday morning blockaders spontaneously erected a 40 foot timber pole and tied it securely upright with multiple support lines in the clear-cut pathway to prevent TransCanada’s reckless clear-cutting from continuing further. When the idea for the pole was first hastily hatched, blockaders peered around the circle of dimly lit faces looking for a volunteer. Without hesitation Maggie raised her hand, saying, “I’ll do it!”

They planned to have her only stay on the pole for 24 hours, but despite her limited food and water supplies Maggie resolved to stay up there for 48 hours and effectively delayed further Keystone XL clear-cutting operations on the site for two entire days. "I’m going to stop them for the second day in a row!” Maggie could be heard shouting down from her 40-foot tall perch when her friends asked her if it was time for her to come down. Long after the batteries had died on her walkie-talkie and she was virtually isolated from supplies and communication with her friends in the tree blockade, Maggie remained determined to hold on for another day. She maintained her morale by vigorously charging up a hand-crank radio and signing along to her favorite artist, Lady Gaga and whatever radio waves she could pick up in the East Texas backwoods.

Maggie is a 22-year-old sweet, soft-spoken dessert chef and north Texas resident. Her decision to climb up the pole was largely motivated by a visceral anger that had been building she climbed up the timber scaffolding to join the tree blockade nine days prior.

“I never thought I would be the one out here, that I had the strength to take action. Its scary being here and seeing these deadly machines destroying the forest right in front of me, and though I’m scared, I feel powerful knowing that I’m what’s standing between my friends and their destruction,” she previously shared. “Now that I’m here I know that anyone can do this if they want. Anyone can stop this pipeline.”

After Maggie climbed the pole she had a constant police presence stationed below. Police have tightened their perimeter around the tree blockade making it extremely difficult to get food, water and other essential supplies into our brave blockaders. By the second day her supplies were starting to run low. Our multiple calls to the Wood County Sheriffs Office to request that we be permitted to give Maggie food and water were met with hang-ups and the gruff reply, “We’re not commenting on the situation.”

Maggie has a passionate love for the world’s oceans and its diverse abundance of sea creatures. She was motivated to action in part by her appreciation for all living things and not wanting to see our world destroyed by extreme fossil fuel extraction, like the tar sands, and run-away climate change. Maggie has been involved in Tar Sands Blockade for months and has been a critical creative force behind many of the colorful banners you have seen at our actions.

We love you Maggie! Please consider a generous donation to her jail support. Thank you for helping defend our homes and our planet from this toxic tar sands pipeline.

Join us at our upcoming Direct Action Training Oct. 12-14 and large public event on Oct. 15 to take a stand.