What Does Food Have to Do With Occupy Wall Street? 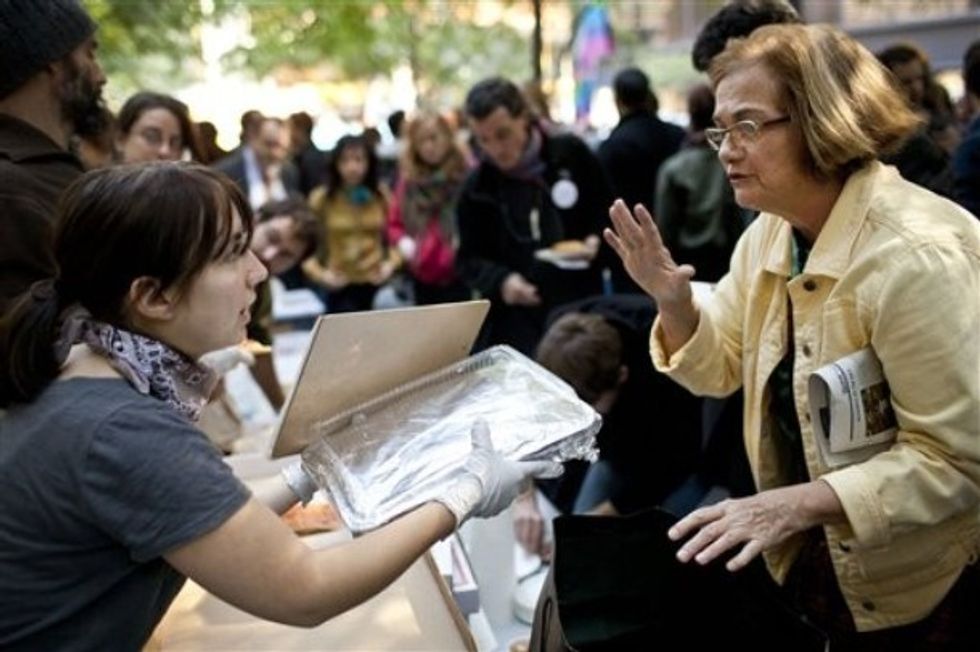 What began with an encampment of makeshift cardboard tents and an impromptu sidewalk gallery of protest signs has exploded into a movement that’s spawning sister protests nationwide. But as numbers grow, so do logistical challenges. How do you feed a crowd of 20,000?

At the cafeteria-style kitchen in Zuccotti Square (the OWS base camp), plates of donated food are doled out by a rotating cast of volunteers, including trained chefs (the overwhelming quantity of donated food has organizers scrambling to donate to local shelters, ensuring nothing is wasted). Operating on 100 percent food donations means the kitchen team has to improvise based on what’s at hand, and prepare any hot meals at apartments or kitchen space in the neighborhood. However improvised, the kitchen supports the values of the activists—food scraps go into a compost bin and dishwater passes through a filter to be reused.

Good, clean and fair food is a value of the activists, but what does it have to do with Wall Street? Food justice writer and activist Jan Poppendeick says the connection is corporate control of agriculture. The statistics are staggering. For example, 90 percent of the corn market is dominated by three companies, and the result is the degradation of human health, the environment and the future health of the food supply. Reclaiming control of the food system from corporate entities is one of the written tenets of the Occupy Wall Street declaration—corporations have poisoned the food supply through negligence and have undermined the farming system through monopolization. Another tenet speaks to animal cruelty inflicted by the common industrial practice of confining animals into tight, inhumane quarters.

Does eating the fast food pizza that comes in through donations undermine their critique? Some say yes, and choose to wait out mealtimes until food arrives that’s in line with their values. Others say it’s worth it to make an exception about what’s on your plate today in order to transform the menus of tomorrow. Food activist Christina Schiavoni of WhyHunger, who distributed farmers market veggies as she marched, said that she would love to see more local, sustainable or organic options available in the kitchen, but noted that the food served is “representative of the current situation. There is no simple way to get fresh, healthy foods down there.”

Some committed individuals and organizations have begun to change that. Kitchen volunteers are seeing more donations coming from farmers markets, and even farmers themselves. Ken Jaffe, the owner of Slope Farms Beef and a US Terra Madre delegate, hopes to be part of that change, offering to come down from the Catskills with his grass-fed ground beef in tow. Jaffe doesn’t just want to give away his meat. He's making connections between Occupy Wall Street and rural issues, and asserts that “there are a lot of people in rural upstate that feel very connected with what they are doing.” He does worry that the link between rural America and the concerns of Occupy Wall Street has yet to be clearly expressed.

With so many messages on t-shirts and banners, it’s hard for any one to rise to the top, but it’s clear that food activists are present on the scene. As Sheila Salmon Nichols noted on our Facebook page, “We might not all agree on all the ideologies of OWS…however, their position on what is happening to our food system is spot-on! Hopefully, this collective energy will move our country/world in a more positive, peaceful and sustainable direction!”