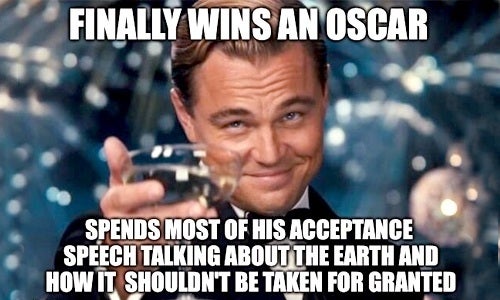 Millions heard the call for climate action on Sunday night, when Leonardo DiCaprio (finally) accepted the Academy Award for Best Actor for his role in The Revenant. After expressing his appreciation for The Revenant’s crew and people who helped him throughout his career, Leo impressed many by dedicating a significant portion of his time to calling for climate action. 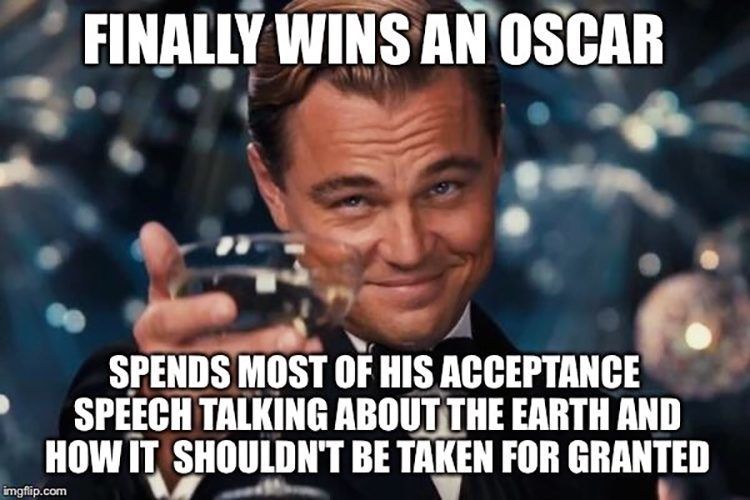 When approached backstage, Leo continued with even more forceful words for deniers: “If you do not believe in climate change, you do not believe in modern science or empirical truths—and you will be on the wrong side of history. We need to all join together and vote for leaders who care about the future of this civilization.”

Andrew Siefter at Media Matters shows how Fox & Friends embodied the right-wing response, namely that Leo shouldn’t be enjoying the luxuries of being wealthy (planes, yachts, etc.) if he’s going to advocate for climate action. This puts Leo in a no-win situation (which is the intent of the attack). On the one hand, if he enjoys the fruits of his labor but cares about the environment, he’s a hypocrite. On the other hand, if he were to live a spartan lifestyle, he’d prove that the greens-as-luddites strawman is real and that environmentalists want everyone to live anti-industrial lives. In this scenario, deniers could then disparage Leo for wasting the wealth and luxuries afforded to him by the free market capitalism they so lovingly espouse.

Surprisingly, one of the best defenses to this sour grapes attack on the compassionate celebrity can be found at the Daily Caller. The article recounts Leo’s answer to a friend who asked why he doesn’t quit acting to focus on being an environmental activist, in which Leo states, “Being an artist gives you a platform. Not that necessarily people will take anything that I say seriously, but it gives you a voice.”

And in front of tens of millions of Oscar viewers, he used that voice.