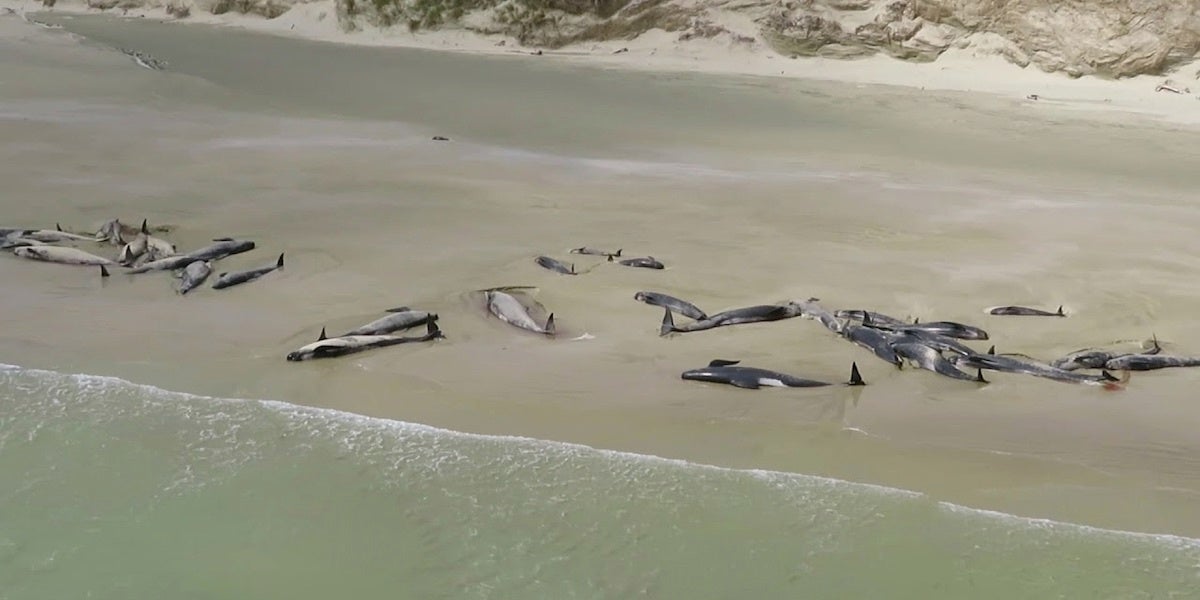 As many as 145 pilot
whales are dead after beaching themselves on a remote beach in Rakiura, or Stewart Island, in southern New Zealand.

A “heartbreaking decision” was made to put down half of the
animals due to their poor condition and the difficult-to-access location, a Department of Conservation (DOC) official said Monday in a media release.

“Sadly, the likelihood of being able to successfully re-float the remaining whales was extremely low,” DOC Rakiura Operations Manager Ren Leppens said in the media release. “The remote location, lack of nearby personnel and the whales’ deteriorating condition meant the most humane thing to do was to euthanize.”

The whales were discovered on Saturday afternoon by a hiker, The New York Times reported.

Leppens told the Times that the whales might have stranded as early as Friday. He said they “started to get covered in sand” by the time they were found on late Saturday.

Poor weather also meant that experts could not be flown in to assess the situation, so conservation workers had no choice but to euthanize the animals, he added to the newspaper.

This is the country’s largest mass stranding event since
250 to 300 pilot whales were found dead last year in Golden Bay.

Marine mammal strandings are a “relatively common occurrence” in New Zealand, the DOC
said, adding that it responds to roughly 85 incidents a year, mostly of single animals.

It’s not clear why marine mammals such as dolphins and whales strand, but factors can include sickness, navigational error, geographical features, a rapidly falling tide, and being chased by a predator or extreme weather, the agency said.

Other strandings occurred on New Zealand shores over the weekend. Ten pygmy killer whales also stranded at 90 Mile Beach on Sunday. Two have since died and re-float attempts will be made Tuesday. A sperm whale beached in Doubtful Bay on Karikari Peninsula in Northland on Friday and died Saturday. Finally, a dead female pygmy sperm whale also washed up at Ohiwa over the weekend.

These events are unlikely to be related, the DOC said.