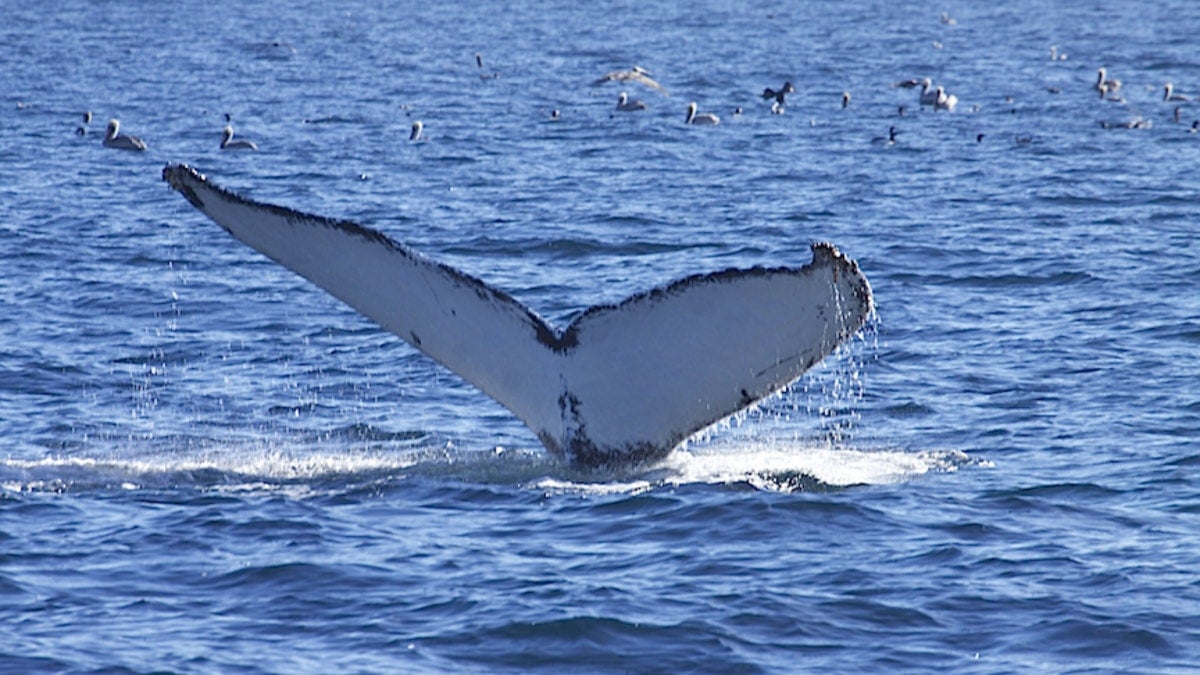 A humpback whale is seen in the Santa Barbara Channel of California. Gregory "Slobirdr" Smith / Wikimedia Commons / CC by 2.0

A blue whale can weigh as much as 200 tons and consume 12,000 pounds of krill in a single day. But even the largest animal on Earth doesn’t stand a chance against a fast-moving cargo ship.

Collisions between whales and shipping vessels are especially prevalent in areas where whale habitat overlaps with busy port traffic, such as the Santa Barbara Channel. This 70-mile stretch of water between mainland California and the Northern Channel Islands is a thoroughfare for thousands of cargo ships going to and from the busy ports of Long Beach and Los Angeles. It’s also a hotspot for endangered and threatened whales.

The National Oceanic and Atmospheric Administration has instituted voluntary slow-speed zones, but whale-ship strikes have still been on the rise for the past few years.

To reverse that trend, a group of scientists from all over the country have collaborated on a new project spearheaded by U.C. Santa Barbara’s Benioff Ocean Initiative. Whale Safe, a technology-based mapping and analysis tool, provides near real-time data on whale activity in the Santa Barbara Channel in the hope of reducing fatal whale-ship collisions.

We spoke to Morgan Visalli, the science lead at the Benioff Ocean Initiative, about how the technology works and what the public can do to help hold shipping companies accountable.

Many whale species thankfully are recovering from the days of intensive whaling, when they were hunted to the brink of extinction. But now they’re facing other threats from ship strikes and fishing gear entanglements.

The Santa Barbara Channel, where we’ve launched Whale Safe, is a really important feeding ground for blue, humpback and fin whales — all species that are either endangered or threatened. Those three species are the ones that we’re focusing on with this first launch of the project.

The past two years were some of the worst on record for ship strikes off the West Coast of the United States. Even worse, the number that we actually see recorded in the data is likely a small percentage of the actual number of ship strikes that occurred.

Scientists estimate that only about 5% to 17% of whale carcasses are actually observed and recorded. So if we see 13 whale carcasses that wash up on the beach, as was the case last year on the West Coast of the United States, it’s likely that that could actually be closer to 130 ship strikes that occurred.

What’s the best way to reduce or eliminate whale-ship collisions?

One way to address this issue is to separate ships and whales. In some places it’s possible to actually move shipping lanes away from areas of known whale concentrations, which can help reduce the risk of these strikes happening.

Studies have shown that when ships slow down it reduces the probability of a strike happening by potentially giving the whale a bit more time to respond. And we’ve also found that slower speeds can reduce the lethality of the strikes.

How does Whale Safe work to try and alert ship captains to whales in the area? 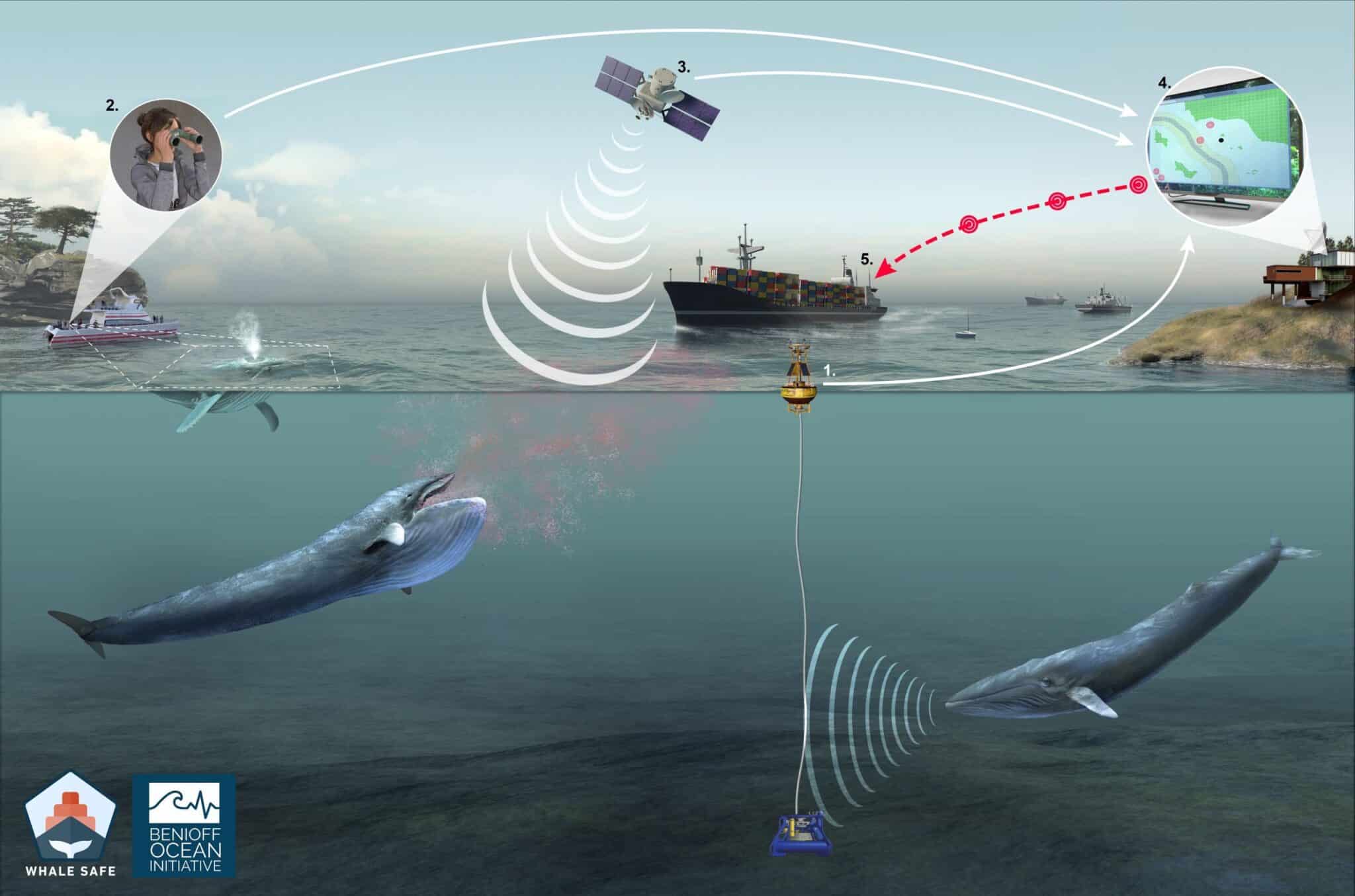 1. Acoustic monitoring instruments identify whale vocalizations. 2. Observers record whale sightings with a mobile app. 3. Oceanographic data is used to predict where blue whales are likely to be. 4. The data streams are compiled and validated. 5. Whale information is disseminated to industry, managers and the public. Nicolle R. Fuller, Sayo Studio

There are three main components.

One is an acoustic listening station. Out in the Santa Barbara channel, our collaborators at Woods Hole Oceanographic Institution and Texas A&M University at Galveston deployed an acoustic buoy that has an underwater microphone near the seafloor. There’s a small computer that processes any audio that the microphone picks up.

It is able to automatically detect the calls of blue, humpback and fin whales. Then there’s a surface buoy with a satellite transmitter that sends that information back to shore. It’s then validated by a scientist on shore before it’s added to the database.

Then the second piece is a blue whale habitat model. We use oceanographic data like sea-surface temperature and current to predict where blue whales are likely to be on any given day. That was developed by our collaborators at U.C. Santa Cruz, the University of Washington and NOAA Southwest Fishery Science Center.

It’s a dynamic model that’s running every day in an automated fashion and producing maps that show us blue whale hotspots.

The third piece is data gathered by community scientists who are out on whale-watching and tourism boats nearly every day. They use mobile apps such as WhaleAlert and Spotter Pro to record whale sightings that are also added to the database.

I know you’ve just launched this database, but what are you hearing from people in the shipping industry that may be using it or want to use it?

Now we’re working on building those relationships, making sure everybody knows that this information is available and also getting more feedback so we can continue to improve the system and tailor the data feeds to fit the needs of different folks within the industry.

One kind of communication pathway that could be really exciting to implement is getting the whale information piped into the charting system on the ship through the automatic identification system (AIS). It’s the navigation and collision avoidance system that all of these large ships have on board. 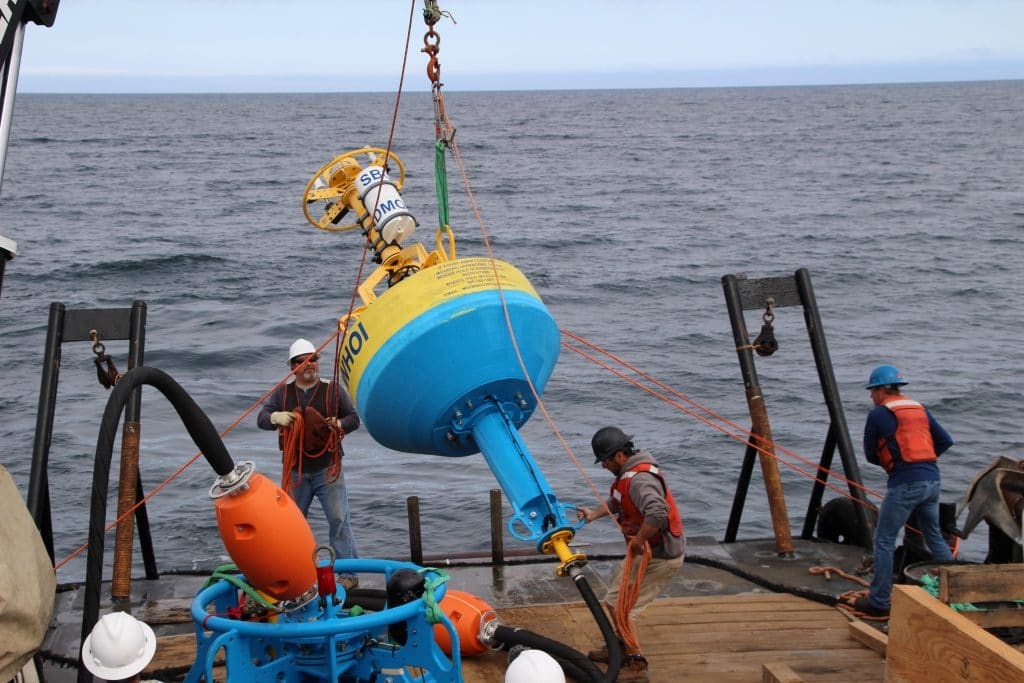 Deploying the acoustic detection system in the Santa Barbara Channel near the shipping lanes in 2019. Benioff Ocean Initiative

There are quite a few challenges, both on the technological side and just the bureaucratic side, of actually getting the data delivered that way. It’s their main safety and navigation tool, so you don’t want it to be crowded with too much data and information. That would need to be done really thoughtfully. But that’s a communication pathway that could really help get this data more easily adopted.

Right now there are voluntary slow-speed zones, but some ships aren’t abiding by those recommendations. How likely do you think they’d be to adopt technology like Whale Safe?

A few years ago there was actually a NOAA-led working group that brought together many stakeholders to try to develop solutions. One of the recommendations that came out of that process was actually a call for new technology and more real-time data on whale activity. And that was supported by many members of the shipping industry that were part of that working group.

That helped to inform the approach that we decided to take. Some of these companies expressed that time is money, and if they’re going to slow down, they want to make sure that they’re slowing down because there are actually whales in the area.

Our hope is that this data can really help to reinforce those slow-speed zones, especially when there’s high whale activity in the channel.

Whale Safe also provides data on how well companies are abiding by the slow-speed zones. But many of these shipping companies aren’t consumer-facing, so how can this information be used by the public to pressure companies to make changes?

Big companies like Walmart, Target and Home Depot import a lot of stuff and use these shipping companies quite often. We’re starting to have conversations with some of those retailers that are more public facing to see if there’s information about whale safety that could be helpful for them as they’re doing their planning around their sustainability portfolios.

And from the public standpoint, the more general awareness there is about the problem of whale-ship collisions, the more it helps public-facing companies know that this is something that they should prioritize in their sustainability planning.

We want people to know that whales are really important for global biodiversity and also as ecosystem engineers that help stabilize the food web. Whales are also important for coastal economies through whale watching and other tourism businesses. And they can help mitigate climate change. Studies have shown that they can actually help to pull carbon out of the atmosphere.

Besides whales being incredible creatures deserving of protection in their own right, there are multiple benefits that we see from keeping these populations strong and healthy in our global ocean.