Sperm Whale Dies With 220 Pound Trash Ball in Its Stomach 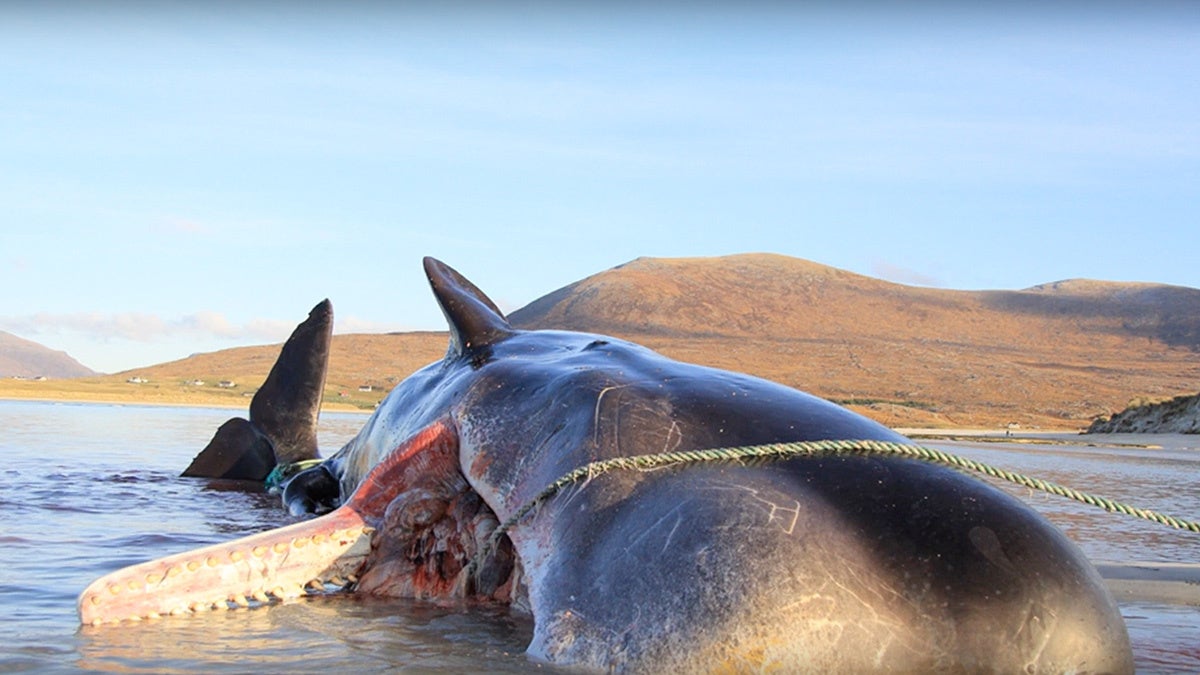 A whale stranded on a Scottish beach had a massive amount of plastic in its stomach. HS News / YouTube screenshot

A sperm whale that washed up on a Scottish beach with 220 pounds of trash in its stomach is the latest symbol of the plastic pollution crisis.

The 20 ton juvenile male died Thursday on Seilebost beach on the Scottish Isle of Harris, CNN reported. The group Scottish Marine Animal Stranding Scheme (SMASS), which performed the necropsy, discovered “a whole range of plastic including sections of net, bundles of rope, plastic cups, bags, gloves, packing straps and tubing,” according to a Sunday Facebook post.

“All this material was in a huge ball in the stomach and some of it it looked like it had been there for some time,” the group said.

The group said that it was possible the amount of debris in the whale’s stomach led to its stranding, but they saw no evidence that it had actually obstructed its intestines.

“What was unusual in this case was the sheer volume,” SMASS Director Andrew Brownlow told The New York Times in an email.

SMASS also noted that the variety of debris found in the whale’s stomach, which included both fishing industry and consumer trash, highlighted the global nature of the plastic pollution problem. They wrote that the whale could have ingested the plastic anywhere between the Azores and Norway, and are now working to discover why this particular whale swallowed such a large amount.

Dan Parry, who runs a Facebook group dedicated to picking up litter on nearby Luskentyre beach, posted the first photos of the stranded whale.

“Debris in our oceans is everyone’s problem – the fishing industry need to do better, but equally, we all need to do more,” he wrote. “Watching this today, makes me despair for the environment, totally falling apart around us.”

Later, he seemed to take his own advice, at least according to a Sunday post on the Facebook page he administers.

“After seeing the fishing debris pulled from the whale’s stomach yesterday, we headed to the beach today to dig out another massive tangle of fishing related rope and net that we had spotted right up at high tide mark,” the post read. “Couldn’t believe how much was actually there. I feel much better knowing that this can no longer be washed into the ocean potentially killing more aquatic life.”

Approximately eight million tons of plastic enter the world’s oceans every year, where it kills 100,000 marine mammals annually, according to Ocean Crusaders.

SMASS said locally that whale and dolphin strandings in Scotland are on the rise, BBC News reported. There were 204 reported in 2009, which more than tripled to more than 930 in 2018.

But Whale and Dolphin Conservation North America in Massachusetts Executive Director Regina Asmutis-Silvia told The New York Times that only a tiny fraction of the whales who die end up stranded on the beach.

“Some studies suggest that strandings account for as few as 2 percent of the number of whales who actually died,” she said. “And while this stranding certainly draws attention to marine debris, a problem that we can all certainly help to resolve, it should also draw attention to the loss of the whale, a key player in our own survival.”