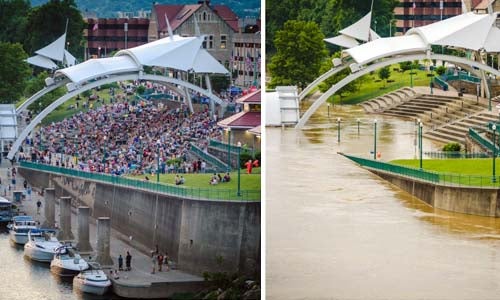 At least 24 people have died and a federal disaster has been declared in West Virginia after heavy rains flooded several towns, prompting search and rescue operations. Both Virginia and West Virginia have declared states of emergency due to the devastating event that has been described as “complete chaos.” 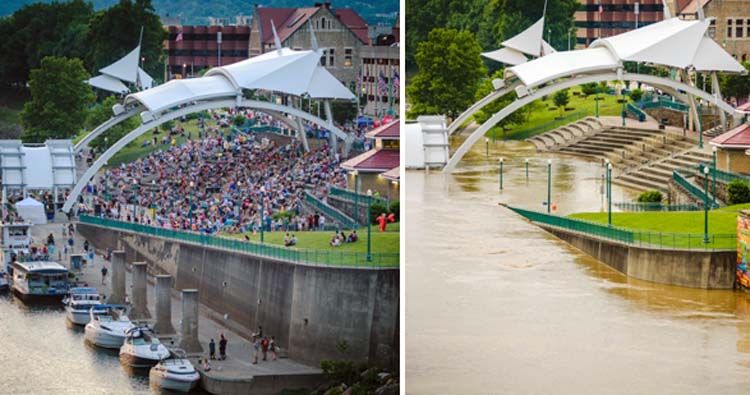 West Virginia climatologist Kevin Law told USA Today that this is the third-deadliest flooding event on record for the state. A November 1985 flood that killed 38 ranked second-worst, and the 1972 Buffalo Creek flood that killed 125 was the worst in state history, the report also said.

The news came one day after at least 12 confirmed tornadoes touched down in northern Illinois, Indiana and Ohio Wednesday evening and Thursday morning, the National Weather Service said. Tens of thousands were left without power across the Midwest as a derecho swept through the region, leaving a trail of damage from Illinois all the way to Virginia.

Here are the latest impacts from these storms:

Sixteen people died in Greenbrier County, at least 15 of them in the town of Rainelle, according to the Associated Press. Greenbrier is the only county where people are believed to still be missing.

Six other deaths were reported in Kanawha, as well as one each in Jackson and Ohio counties.

Eight-year-old Emanual Williams died Thursday at a West Virginia hospital after he slipped into a creek in Ohio County and was swept away by raging waters, The Intelligencer reported. Williams is the only fatality to be identified by authorities so far.

Saturday a news release from Tomblin’s office announced that a federal disaster declaration was approved for assistance in Kanawha, Greenbrier and Nicholas counties. The declaration provides people in those counties with individual assistance for emergency medical support, housing and a number of other immediate needs.

The governor said he planned to fly around the hardest-hit areas, but was unable to because all the state aircraft are being used for rescues.

Saturday officials announced the PGA Tour scheduled for July has been canceled due to the flooding. According to AP, the Old White TPC golf course at the Greenbrier Resort has suffered extensive damage and is “beyond reasonable repair to conduct the tournament.”

In Sulphur Springs, Belinda Scott sustained burns over two-thirds of her body after her flooded home exploded. Before the incident, Scott called her husband to tell him their house was filling up with water. She had fled to the attic to wait when she smelled natural gas. Then, the house exploded.

Scott was able to break a vent and get out onto a porch and into a tree, which she clung to for hours before being rescued by state police.

Some areas of the state are “probably looking at flooding that’s going to be the worst in 100 years,” said the governor’s communications director Chris Stadelman.

Hundreds of people became stranded at the Elkview Crossings Mall after the overpass bridge into the shopping annex was washed away by floodwaters. Some had to sleep in their cars or at businesses overnight.

One of the people rescued, Eric Blackshire, opted for a hotel room.

“It was kind of like a hurricane party,” he told AP. “I guess you could call it a flood party. There were lots of beers being drank last night.”

Blackshire and others were transported to safety Friday by Pinch Volunteer Fire Department firefighters. They used a rope to guide people down a hillside as crews worked to build a gravel road on the shopping plaza’s backside.

The Kanawha County Emergency Ambulance Authority says they are estimating about 500 people are stuck in the plaza. Tomblin said crews are working to build a gravel road to reach those who are trapped.

White Sulphur Springs residents were left reeling as heavy flooding encroached the city, West Virginia Metro News says. Significant flooding knocked a home off of its foundation and it caught on fire, WSAZ-TV reported. The burning house was seen floating down Howard’s Creek.

Check out this shocking video out of White Sulphur Springs. A burning house swept away by floodwater #EyewitnessWV pic.twitter.com/RX6nAnCL6D

One resident posted a heart-wrenching update to Facebook, saying, “Please pray for our neighbors. They are trapped in their attic with small children. Our other neighbors are on their kitchen counter..it has washed away the barn..cars..buildings. .flooded houses … My sister has lost her pets … it is devestating … please pray for our small town..’

“We surely need your prayers, because there’s a lot of people hurting right now,” Jim Justice, owner of the Greenbrier Resort, said during an interview on The Weather Channel.

In the town of Richwood, where a flash flood emergency was declared, homes and buildings were evacuated as water levels rose quickly Thursday afternoon, according to the Associated Press. Mayor Robert Johnson said the damage will be extensive in the wake of the storms.

“We pretty much live in a bowl, and the bowl filled with water, certainly,” he told the AP.

The town of Clendenin also experienced severe flooding, and according to local reports, the town was only able to be reached by helicopter Thursday night.

Botetourt County Battalion Chief Andrew Moore said by telephone Friday that one worker fell in the water during a rescue in Alleghany County on Thursday night. He says the worker is in critical but stable condition. He says two other workers hurt while rescuing their colleague received minor injuries and were released from a hospital.

Residents of downtown Covington, as well as low-lying areas of the city, were evacuated Thursday night to established shelters, WDBJ reported. Evacuations were ordered as the Jackson River neared record levels.

Roads were closed and several house fires were sparked by lightning as the storms pushed through the Commonwealth.

According to the Roanoke Times, a handful of roads were closedby flooding in Covington and Alleghany County, and a few other roads were shut down in Botetourt County, the state Department of Transportation said.

House fires were blamed on lightning in Read Mountain, Goode and Thaxton, the report added. No injuries were reported in those incidents.

As many as 18 reports of tornadoes came in Wednesday night, and NWS survey crews conducted damage surveys along 3 separate supercell paths Thursday morning.

An EF2 tornado was spotted in Marseilles-Seneca Wednesday night, according to NWS. Two separate EF1 tornadoes were also reported that same night in West Brooklyn and Cissna Park.

Shortly before 10:30 p.m. CDT, a large tornado moved into the town of Pontiac, Illinois. The tornado, which the NWS has preliminarily rated an EF2, was left an 11-mile damage path.

The tornado ripped off the side of a Shell gas station, tossing mangled metal and wood around, ABC7 reports. Some pieces shattered the windows of parked cars. The glass hit one person, but the injuries were minor.

The driver of a semi parked at the gas station suffered a dislocated shoulder after the winds blew his truck over into its side, the station said.

Storm spotters reported seeing power flashes before much of the town of 12,000 lost power, and chasers who followed the storm into Pontiac saw destroyed mobile homes at a trailer park. According to the fire chief in Pontiac, two children inside a mobile home suffered minor injuries, WGN reports.

North of Ottawa, an EF0 tornado was confirmed by the NWS. The twister had maximum winds of 90 mph, measured 100 yards wide and stayed on the ground for 4.5 miles.

In the town of Seneca, fire crews were responding to reports of people trapped in a home, but nobody was believed to be injured inside the dwelling.

Driver of this semi, overturned by the tornado, suffered a dislocated shoulder. #Pontiac #Tornado @ABC7Chicago pic.twitter.com/TsUp7PEftt

This is a strong argument for why you shouldn't take cover in a car when a tornado is about to hit. #Pontiac pic.twitter.com/RaeqvuoA4h

The night began when a tornado was observed briefly near Amboy by trained spotters at about 7:15 p.m. CDT Wednesday night. The second tornado was reportedly in progress just minutes later in Lee County, near the towns of Paw Paw and Compton. The NWS reported tree damage in Compton.

Hannah Eason, who lives in Morris, drove through the storm, ABC 7 reports.

“I was thinking I was going to die. I was really thinking that something bad was going to happen. It was just bad. I was about to cry,” Eason said. “The rain… I couldn’t even see when I was driving, the road.

A home in the north Chicago suburb of Evanston is “uninhabitable” after a lightning strike sparked a fireWednesday evening, CBS Chicago reported. A neighbor called to report the two-story home had been struck by lightning and fire crews arrived to find smoke coming from the eaves with the attic on fire, the fire department said. No injuries were reported.

The storms then marched toward Chicago, and at Soldier Field, some 50,000 soccer fans attending the Copa America semifinal game between Chile and Colombia were asked to clear the stands and seek shelter Wednesday evening, according to the AP. The teams were allowed to play the first half, but storms moved in at halftime, forcing stadium officials to activate the storm safety plan.

A tornado spotted 5 miles south-southeast of Huntington was rated EF1 by NWS. It was quickly followed by another tornado, rated an EF2, which traveled in the same area just minutes later. The second tornado crossed the path of the first, according to the damage survey.

A large outbuilding on a farm near Brookston containing several tractors, a combine and other farm equipment had its roof completely ripped off, WTHR reports.

The high winds during knocked over a radio tower in Russiavilleearly Thursday morning.

“Just all of a sudden it was raining sideways and blowing so hard, you couldn’t see in front of your face,” Russiaville Town Marshal Roger Waddell told Fox 59. “We heard tree limbs snapping and I heard some stuff blowing around.”

Check this out. A radio tower down in Russiaville. Damage to some RV's but otherwise blocking roadway. pic.twitter.com/9SBzNjr7SM

The tower, which was mostly used for a broadband internet service, landed on some power lines and was resting on the roof of an RV business.

The NWS has confirmed a pair of EF0 tornadoes hit the Buckeye State during the severe weather outbreak, with damage surveys ongoing. One tornado was confirmed in Fayette County, east of the Washington courthouse, while the other occurred in Clinton County, southwest of Wilmington.

No injuries have been reported, WLWT.com said, but photos and video from the area showed a variety of damage to trees, wires and some buildings between Waynesville and Wilmington. Trees were also reported down on houses in West College Corner, Madison Township and Hyde Park.

Around 34,000 Duke Energy customers were left without power at one point during the storm.