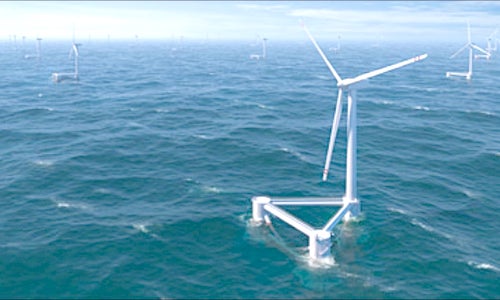 The development of what should be the U.S.’ first offshore wind farm on the West Coast received a boost this week, earning approval to begin building.

The approval of a five-turbine, 30-megawatt (MW) pilot project off Coos Bay in Oregon was announced Wednesday by Gov. John Kitzhaber, U.S. Secretary of the Interior Sally Jewell and Bureau of Ocean Energy Management (BOEM) Director Tommy Beaudreau. The farm would be about 15 miles from shore in about 1,400 feet of water, according to The Associated Press. 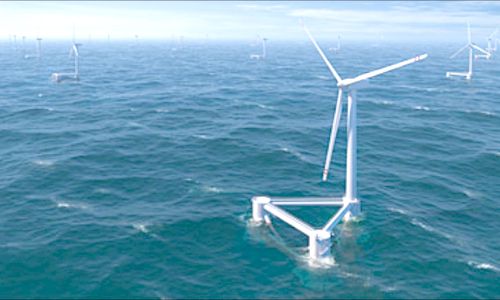 Plans for an offshore wind farm in Oregon were announced this week. Photo credit: Opb.org

Seattle-based Principle Power will use a floating wind turbine technology that has not been deployed in U.S. waters but has been used in Europe and Asia. Belinda Batten, director of the Northwest National Marine Renewable Energy Center at Oregon State University, told The Associated Press that plans for offshore farms on the West Coast had yet to surface because of different technological needs to deal with the Pacific Ocean getting deeper more quickly than the Atlantic or other areas. Turbines off the Atlantic coast will be anchored to the seabed .

The Coos Bay project will use electrical cables and a single power cable to transmit electricity back to the mainland.

“We’re not as anxious to commercialize it, but it’s still worth getting the projects into the water and testing them,” Batten said. “As we learn how to deploy and maintain them, the price will come down.”

Using statistics from the National Renewable Energy Laboratory, the U.S. Department of Interior estimates that the West Coast is capable of producing more than 800 gigawatts (GW) of wind energy—which equals more than three-quarters of the nation’s entire power generation capacity, according to North American Wind Power. The estimate for the whole country is nearly 2,000 GW.

Atlantic coast projects include a pilot project in Maine that developers hope will give way to a 500-MW farm, as well as a wind farm to be constructed off the shores of Cape Cod, MA that has been stymied by lawsuits from opposers.