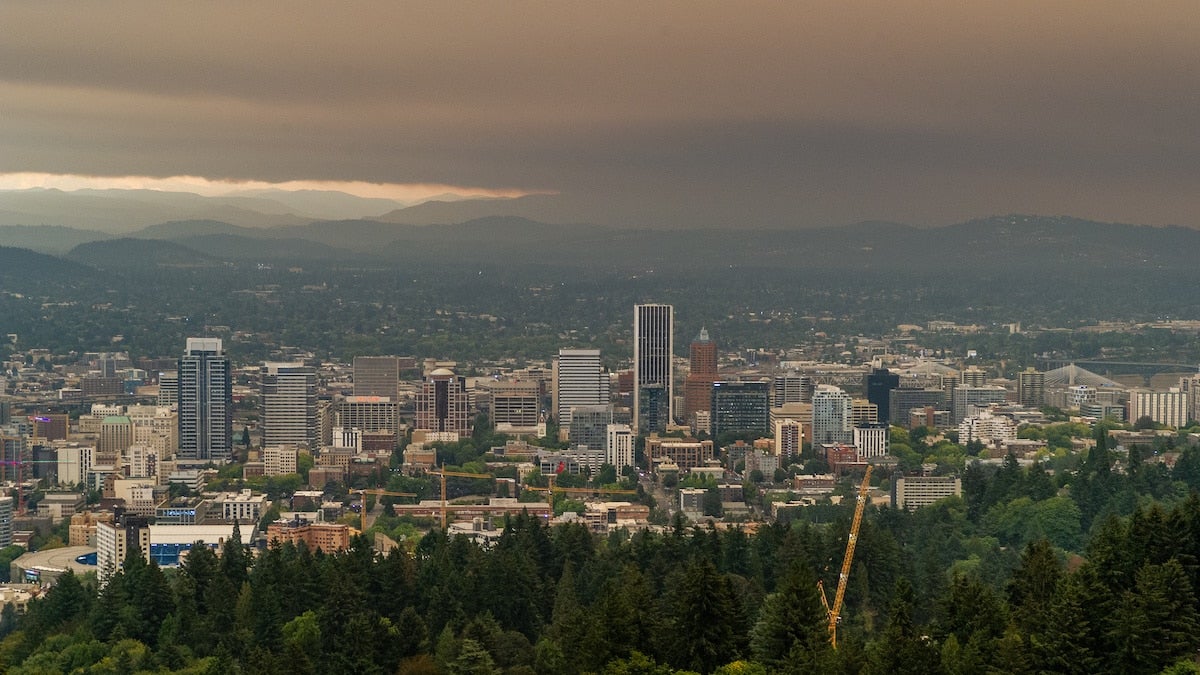 Smoke covers the skies over downtown Portland, Oregon, on Sept. 9, 2020. Portland had the worst air pollution among major cities around the world due to the 37 active wildfires that have burned more than 800,000 acres throughout the state. Diego Diaz / Icon Sportswire

The wildfires raging across the West Coast have made the air quality so bad in several U.S. cities that they rank among the worst in the world. In fact, the air quality in Portland, Oregon was so bad on Sunday that it went off the charts when it passed 500 on an air quality index. Anything in the 300 to 500 range is hazardous to health, according to Oregon Live.

Those staggering numbers put Portland squarely in the number one position as having the world’s worst air quality.

Other large cities on the West Coast also made the top 10, including Seattle, San Francisco and Los Angeles, which ranked third, sixth and eighth, respectively, according to the Los Angeles Times.

In Washington state, the air quality was so bad that the instruments used for reading air quality broke down, rejecting the numbers as unreliable, according to The New York Times.

Andy Wineke, a spokesman for the Washington Department of Ecology, said on Sunday that a handful of reading points had ceased reporting data because automated quality control checks said the astronomical readings meant the data was unreliable, according to The New York Times.

“There’s some trigger in the quality-control check that said the sustained readings were high,” Wineke said. Officials were trying to change the system to allow the data so it could be included on the state’s air-monitoring maps.

The smoke from the wildfires made the air extremely dangerous and life-threatening for people with respiratory conditions. In some places, residents said they could not see more than 50 feet in front of them, according to The Washington Post. While residents were instructed to stay indoors, some were coughing and choking while inside.

“The sun doesn’t seem to rise or set. The sky gets a little bit brighter and a little bit darker and that’s how you know the day is starting or ending,” said Eileen Quigley, founder and executive director of the Clean Energy Transition Institute in Seattle, as The Washington Post reported.

“It’s just an unfortunate overlap,” Vines said of the confluence of the virus and the fires, according to The New York Times.

Oregon Senator Jeff Merkley told ABC News that he drove 600 miles up and down the Oregon coast and could not escape the smoke. In the same broadcast, Washington Governor Jay Inslee said, “We have a blowtorch over our states in the West, which is climate change.”

The pall of smoke that has shrouded Portland and its surrounding areas has reduced visibility so much that it’s dangerous to drive and difficult for rescue crews and fire services to navigate bridges and roads.

Some moisture and rain is expected to bring relief Tuesday and dying winds raise hope that firefighters will soon be able to contain the blazes engulfing the West Coast, according to The Washington Post.