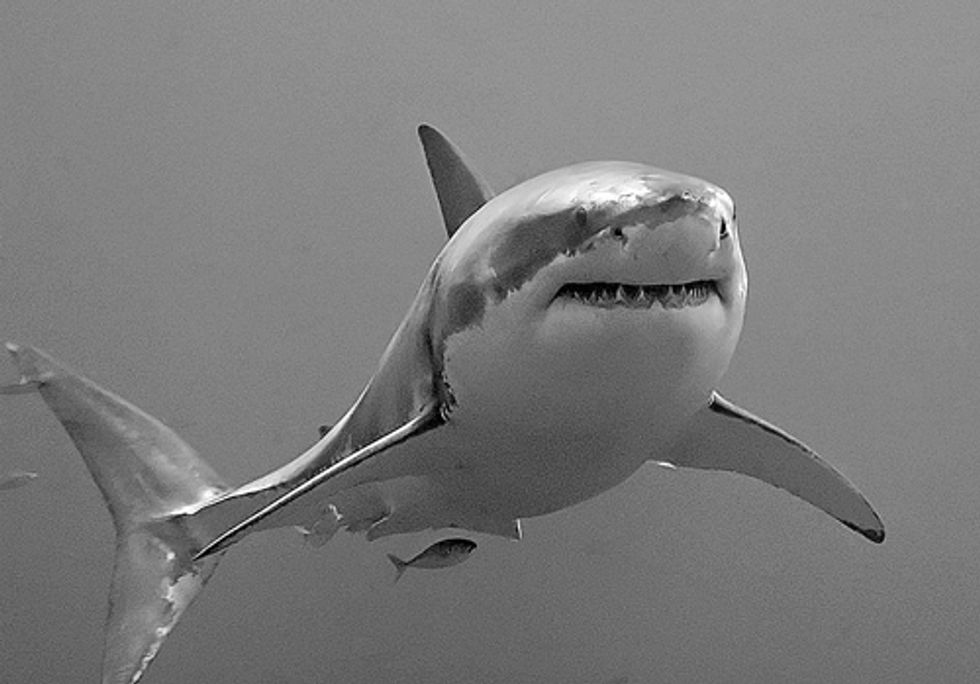 WildEarth Guardians submitted a petition on June 21 to the National Marine Fisheries Service seeking to list the West Coast population of great white sharks as “threatened” or “endangered” under the Endangered Species Act (ESA). This tiny population of approximately 440 sharks inhabits the Pacific Ocean between California and Hawaii and is threatened by pollution, habitat destruction and human exploitation. Great white sharks world-wide have suffered large population declines and are designated as “vulnerable” by the International Union for Conservation of Nature (IUCN).

“The film Jaws contributed to years of human persecution and made great whites a popular target of sport fishing,” said Taylor Jones, endangered species advocate for WildEarth Guardians. “Now it is the sharks who ‘need a bigger boat’ to survive—the legal ark of the Endangered Species Act.”

Because of their near-legendary “big-fish” status, great white sharks have very high commercial value; teeth can sell for $600—$800 per tooth and jaw sets can be valued at up to $50,000. The high value of these products encourages poaching and illegal trade in shark parts.

Pollution presents a particular problem for the petitioned population segment. Contaminants, including pesticides, fertilizers, trace metals, petroleum and organochlorines such as PCBs are washed into the California Bight, an important habitat for young great white sharks. High levels of mercury and organochlorine, contaminants found in great white sharks in the Southern California Bight, may be causing behavioral alterations, emaciation, cerebral lesions and impaired sexual development. As top predators, sharks are susceptible to bioaccumulating large amounts of mercury; on average, mercury accumulates to levels a million times higher in the bodies of predatory fish than in the atmosphere.

This population of great white sharks adheres to an interesting migratory pattern. Adults spend most of their time in coastal aggregation sites either off central California or near Guadalupe Island off the coast of Baja California. Adult males will gather yearly in a patch of ocean between Hawaii and California known as the White Shark Café. Females migrate once every two years to an expansive area around the Café, but are usually only found in the Café itself once the males have returned to their coastal aggregation sites.

Great white sharks have a low reproductive rate—they mature slowly and females give birth only once every 2-3 years, to litters of 2-10 pups. Pup survival is likely low. Because of this, it is difficult for great white shark populations to recover from even minor losses—research off the Farallon Islands in California suggested that the removal of only four white sharks greatly reduced and may have temporarily eliminated an entire local population of sharks.

Most sharks, including great whites, play an important role as apex predators in maintaining ocean bio-communities. Ecosystem stability and biodiversity, Congressional priorities for the ESA, could seriously suffer from the loss of these top predators.

“In the sea as on land, predators are key species in maintaining the natural balance,” continued Jones. “They often face unjust and disproportionate persecution or intensive human exploitation—the great white shark is no exception. Yet protection for these powerful creatures would result in benefits for a host of other organisms that share their habitat.”

Listing under the ESA has proven an effective safety net for imperiled species: more than 99 percent of plants and animals listed under the act persist today. The law is especially important as a bulwark against the current extinction crisis; plants and animals are disappearing at a rate much higher than the natural rate of extinction due to human activities. Scientists estimate that 227 species would have gone extinct if not for ESA listing. Listing species with global distribution can both protect the species domestically, and help focus U.S. resources toward enforcement of international regulation and recovery of the species.