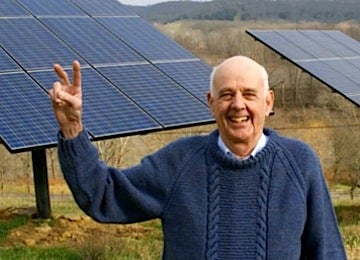 This week on Moyers & Company in a rare television interview, Moyers talks to visionary author and farmer Wendell Berry to discuss a sensible, but no-compromise plan to save the Earth. We also examine the critical role of honey bees in our food supply and the threats they face in The Dance of the Honey Bee. And after the antics in Washington this week, Moyers shares his views on the government shutdown.

Wendell Berry, one of America’s most influential writers who has written more than 40 novels, books of poetry, short stories and essays, has become an outspoken advocate for revolution. He’s calling for immediate action to end industrial farming and return to the sustainable farming methods of years past. In his interview, Berry says: “People who own the world outright for profit will have to be stopped; by influence, by power, by us.”

The short documentary Dance of the Honey Bee, narrated by Bill McKibben, takes a look at the determined, beautiful and vital role honey bees play in preserving life, as well as the threats bees face from a rapidly changing landscape. “Not only are we dependent on the honey bee for much of what we eat,” says McKibben, “there is, of course, a grace and elegance they bring to the natural world that would diminish us all were they to disappear.”

And this week’s government shutdown has consequences for all of us, costing an estimated $300 million each day that the government is closed for business. Many Americans have voiced their frustrations with the fallout from the shutdown on Facebook, Instagram and Twitter using the hash tag #DearCongress. Here, Moyers shares his own frustrations, admonishing the Republican Party for holding the country hostage via an irrational “ransom list” of demands, while sabotaging democracy in the process.