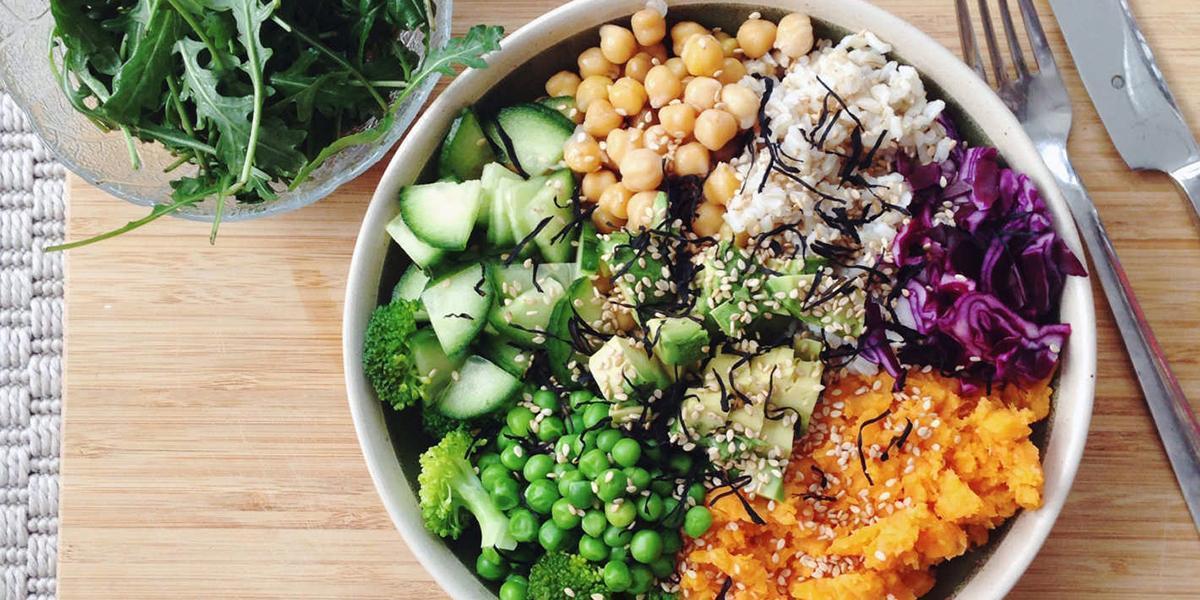 People may choose a vegan diet for a variety of reasons, be it for the environment, animal ethics or health.

However, some people give the vegan diet a try purely to lose excess weight—and perhaps for good reason.

Vegans tend to have lower body mass indexes (BMIs) than the general population and several studies acknowledge that a vegan diet can promote weight loss (1, 2).

Not to mention, a well-planned vegan diet is nutritious, can lower blood sugar and cholesterol levels and may even decrease your risk of certain diseases (3, 4).

This article explains how a vegan diet can help you lose weight and shares some tips on how to follow this diet in a healthy way.

Observational studies often report vegans to be thinner or to have lower BMIs than the general population (2, 5).

In addition, randomized controlled trials, the gold standard in scientific research, show that when all other factors are controlled for, vegan diets can help participants lose significant amounts of weight (6, 7).

In one study, people following a vegan diet for 18 weeks lost 9.3 pounds (4.2 kg) more than those who made no dietary changes (6).

Participants assigned to the vegan group lost an average of 7.5 percent of their body weight over the 4-month study period. This was more than twice as much weight as the average lost in each of the other four groups (8).

In fact, a low-fat vegan diet helped participants in one study lose 2 to almost 3 times more weight than diets recommended by the American Dietetics Association (ADA), the American Heart Association and the National Cholesterol Education Program (1, 3, 4, 9, 10).

In a study that followed up with participants one year after the initial study period, researchers reported that all participants regained some weight.

Summary: Vegan diets can help individuals lose significant amounts of weight and keep it off. They could be even more effective than diets currently recommended by certain health authorities.

In order to lose weight, you need to create a calorie deficit.

A vegan diet can help you create this calorie deficit in several ways.

Such foods tend to be rich in fiber, a nutrient that can help reduce hunger and increase feelings of fullness (11, 12, 13).

Higher fiber intake may help you achieve the calorie deficit needed for weight loss without restricting your calorie intake or portion sizes.

Studies show that consuming an extra 14 grams of fiber each day may naturally decrease your calorie intake by as much as 10 percent. This could lead to a loss of 4.2 pounds (1.9 kg) over a period of approximately 4 months (14).

The high fiber content of the vegan diet may also explain why study participants assigned to a vegan diet often lose weight despite being allowed to eat until they feel full (1, 4, 9, 15).

Due to its higher content of fruits and vegetables, a vegan diet provides fewer calories for the same volume of food. In other words, it’s less calorie-dense.

Practically speaking, you would have to eat approximately 10.5 ounces (300 grams) of cooked broccoli or about 10 ounces (283 grams) of melon to consume 100 calories.

Meanwhile, it would only take around 2 ounces (56 grams) of chicken breast or about 1 ounce (28 grams) of cheese to reach the same number of calories.

The lower calorie density of plant foods causes you to feel full with fewer calories, thus potentially contributing to the calorie deficit needed for weight loss.

However, it’s important to note that when matched for calories, a vegan diet is no more effective than a control diet for weight loss (16).

Limits Your Intake of Certain Foods

Many of the foods you come across each day contain animal products.

These include high-calorie, low-nutrient options such as processed foods and baked goods, which are deceptively easy to overeat (17).

Studies show that being exposed to such foods makes you more likely to consume them (18).

Following a vegan diet can make it easier to limit or avoid these options.

For instance, it’s easier to avoid eating more calories than you need when the cafe doesn’t offer vegan brownies or when a bowl of candy only contains milk chocolate.

Research shows that having access to a wider variety of foods may cause you to mindlessly consume up to 23 percent more calories. By limiting your food choices to a select few, a vegan diet can help reduce your risk of overeating (19).

A vegan diet may also restrict the variety of choices you have when eating out. As a result, many vegans choose to cook at home rather than go to restaurants.

Summary: Vegan diets are generally richer in fiber, lower in calories and tend to limit your food options. All of these factors can help you lose weight by reducing the number of calories you eat.

In addition to helping you lose weight, a well-planned vegan diet is nutritious and can offer a variety of health benefits.

However, a poorly planned vegan diet can raise certain risks.

A plant-based vegan diet tends to contain a good amount of fruit, vegetables, whole grains, nuts and seeds—all of which are high in vitamins, minerals, fiber and healthy plant compounds (20).

When compared to diets recommended by health authorities such as the ADA, AHA and NCEP, vegan diets appear to be up to 2.4 times more effective at lowering blood sugar levels in diabetics (3, 4, 21, 22).

A diet with the ability to lower both cholesterol and blood sugar levels can be particularly beneficial, as it may lower the risk of heart disease by up to 46 percent (26).

Studies show that a vegan diet may reduce symptoms of arthritis as well, such as joint pain, swelling and morning stiffness (27, 28).

Well-planned vegan diets are considered nutritious and safe for all stages of life (29, 30, 31).

But poorly planned vegan diets can increase the risk of nutrient deficiencies and poor health.

For example, vegans are more likely to suffer from a vitamin B12 deficiency. This risk seems especially apparent for vegans who don’t consume vitamin B12 supplements or eat vitamin B12-fortified foods (32).

Consuming insufficient amounts of these nutrients can lead to an array of health issues, including nervous system damage, hypothyroidism, anemia, bone fractures and depression (38, 39, 40, 41).

Vegans who fail to consume fermented foods such as sauerkraut and natto may also lack sufficient vitamin K2, a nutrient important for heart and bone health (42, 43, 44).

Finally, genetics may affect your ability to thrive on a vegan diet.

Up to 45 percent of people poorly convert the beta-carotene found in carrots and other orange-colored vegetables to retinol, the active form of vitamin A (45, 46).

Similarly, some people’s genetics may make it harder to maintain adequate levels of choline, a nutrient important for heart, liver and nervous system health (47).

If interested in a vegan diet, you should strongly consider tracking your nutrient intake in an online food journal and getting your blood nutrient levels measured.

You can then enrich your diet with fortified foods or supplements as needed.

Summary: Vegan diets generally contain many nutrient-rich foods that can help reduce the risk of various diseases. However, it’s important to make sure your diet is well-planned to avoid nutrient deficiencies.

How to Safely Lose Weight on a Vegan Diet

Eliminating animal products from your diet doesn’t automatically lead to weight loss for everybody.

Here are some tips to keep in mind to maximize weight loss while ensuring that you continue to meet all your nutrient needs:

• Eat lots of veggies: Consume a wide variety of vegetables and aim to fill at least 50 percent of your plate with them at each meal.

• Pack in the protein: Include protein-rich foods, such as tofu, tempeh, seitan, beans, lentils and peas at each meal.

• Monitor fat intake: Avoid consuming large amounts of oils and fat-rich plants, such as avocados, olives, coconut, nuts and seeds, since they are high in calories.

• Keep track of what you eat: Track your intake using an online food journal and get your blood nutrient levels checked to ensure you meet your nutrient needs.

• Get enough nutrients: Make sure to include fortified foods or supplements as needed, with particular attention to vitamin B12.

Summary: Following these guidelines will help you lose weight on a vegan diet without compromising your nutritional status.

Not all vegan diets are equally beneficial.

These diets are unlikely to meet your daily nutrient needs or help you lose weight.

This is why a 200-calorie snack of roasted chickpeas is generally more effective at reducing hunger than the same number of calories from vegan ice cream.

The filling effect of roasted chickpeas may also prevent you from overeating later on in the day, making it easier for you to create and maintain the calorie deficit needed to lose weight.

A plant-based vegan diet can be very effective at helping you lose weight.

This especially rings true if it contains a good amount of nutrient-rich plant foods and limited amounts of highly processed or high-fat plant foods.

In addition to helping you lose weight, a vegan diet can also help improve your health in a variety of ways, as long as it remains well-planned.

If you want to try this diet, you can see whether you’re meeting your nutritional needs by tracking your daily intake and checking blood nutrient levels periodically.