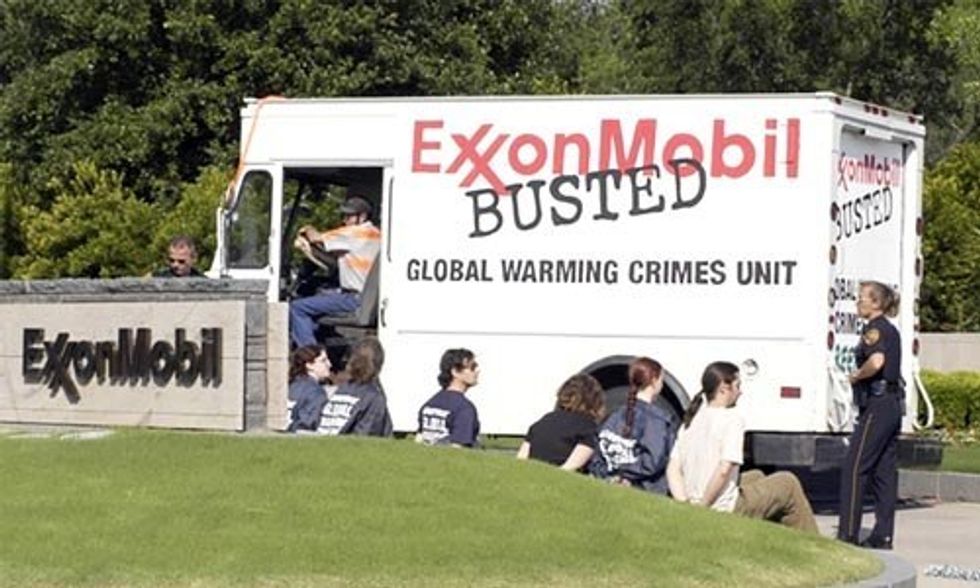 I'm still trying to process recent revelations in the LA Times and the Pulitzer-winning Inside Climate News about the extent to which ExxonMobil has worked to deny climate change. It knew about the threat of a planet warmed by burning fossil fuels as far back as the 70's, and while publicly denying these risks, built them into its business plans. Wait, what?!

While deeply shocking, it's sadly not surprising: Greenpeace has been exposing ExxonMobil's climate denialism for more than a decade. Yes, it's outrageous, but now we need to turn that outrage into action to get governments and citizens to hold ExxonMobil and other fossil fuel companies legally accountable for the damage their activities have caused.

How do we know ExxonMobil is still blocking climate action?

For one, ExxonMobil remains a member of the American Legislative Exchange Council (ALEC). This corporate "bill mill" pushes climate-denying legislation on lawmakers through closed-door meetings. Greenpeace USA research revealed that ExxonMobil donated at least $1.6 million to ALEC between 1998 and 2012. A quarter of that money went to efforts to fight policy on climate change. ExxonMobil donated again to ALEC in 2014 and although ALEC's secrecy prevents us from knowing exactly what the money went toward, we can bet it didn't help action on climate change.

Then there's Willie Soon, the scientist who had insisted for years in published papers and in front of Congress that rising temperatures were merely the result of solar activity, not man-made climate change. Soon's credibility was all but destroyed this year, when an investigation by Greenpeace and the Climate Investigations Center revealed that Soon had failed to mention the more than $1 million in fossil fuel donations he'd received for his research, including money from ExxonMobil. (The kicker? ExxonMobil had claimed in 2007 that it was no longer funding climate deniers like Soon.)

If a fossil fuel company like ExxonMobil continues to fight action on climate change even after years of its hypocrisy being exposed, what will it take to stop it?

The answer is legal action. Just like the tobacco companies that denied the harmful effects of smoking, ExxonMobil won't stop unless it's forced to. If that leaves you feeling even more frustrated, read on for how Greenpeace is working to make it happen!

Last month, Greenpeace Southeast Asia, Filipino typhoon survivors and local community organizations filed a complaint with the Commission on Human Rights of the Philippines. The complaint demands the launch of an immediate investigation into the responsibility of major fossil fuel companies, including ExxonMobil, Chevron, BP and Shell, for their human rights impacts resulting from climate change.

It's an impact Filipinos know all too well. In 2013, the country was rocked by super typhoon Haiyan, a national disaster in which more than 6,000 Filipinos lost their lives and almost two million were left homeless. Intense and destructive storms like Haiyan are likely to become more common as the climate crisis intensifies. Scientists have already linked the high impact of Hurricane Sandy in New York to climate change. And while the complaint to the Commission on Human Rights is not a legal action, an investigation by the Commission could uncover evidence needed for future lawsuits.

Closer to home, Presidential candidates Hillary Clinton, Senator Bernie Sanders and former Maryland governor Martin O'Malley, as well as Senator Sheldon Whitehouse and Representatives Ted Lieu, Mark DeSaulnier, Peter Welch and Matthew Cartwright have all called for federal investigations into what Exxon (as the company was known back in the 80's) knew and how it denied climate change. To make sure ExxonMobil is now held accountable, we've teamed up with just about everybody in the environmental movement to tell the Department of Justice to investigate. You can add your voice to the outcry right here.

This kind of case has been won before, and we can do it again.

In 2006, a federal court determined that the tobacco industry had knowingly conspired to undermine the science that proved its products were harmful to health. Sharon Eubanks, the lead Department of Justice attorney on that case, has come out saying she thinks a similar argument against the fossil fuel industry could win in court today.

The Department of Justice hasn't yet responded to calls for an investigation. And state attorney generals, who've also won major cases against Big Tobacco, have been similarly silent. But the evidence against Big Fossil Fuel is building. With enough pressure, government officials, tasked with protecting the public and fighting corporate fraud, will have to act. So let's roll up our sleeves and get to work.