We Mean It, Bank of America: No More Money for Coal 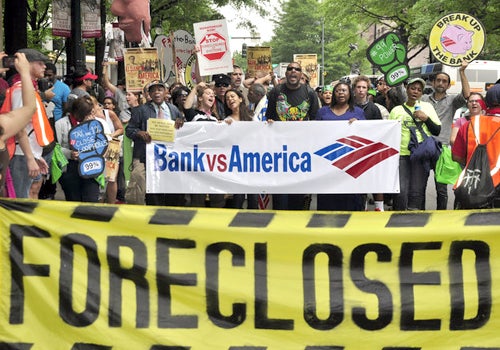 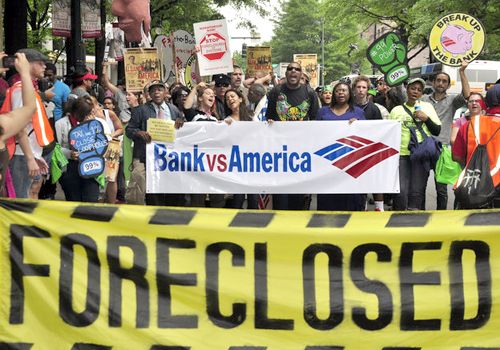 Morning came early for us yesterday in Charlotte, NC. In the days leading up to May 9, busloads of activists from Miami to Olympia had joined the North Carolina community to protest the Bank of America Shareholder meeting. They joined us to stand together and stand up to the big Bank that calls Charlotte home.

In the last two years, Bank of America has thrown more money at the coal industry than any other bank—more than $4.2 million. We know that by investing in the dirty energy that is cooking our planet and making us sick, Bank of America is as responsible for climate change as the coal companies themselves.

That’s why yesterday, climate activists joined a movement fighting many of Bank of America’s short-sighted investment policies: racist and predatory lending, robo-signed foreclosures, loans for mountaintop removal. Nearly 1,000 of us marched through the Charlotte streets to the Shareholder meeting, flooding the intersection and halting traffic for a two-hour rally. Meanwhile, inside the shareholder meeting, members of impacted communities like Larry Gibson and Adam Hall of the West Virginia coal fields shared the experience of living life as Bank of America’s collateral damage.

While we had an incredible morning of singing, marching, and uniting our struggles on BofA’s doorstep, we wish these protests weren’t necessary in the first place. We want our big financial institutions like Bank of America to work for America. We want an economy that doesn’t prioritize quarterly profit when people’s lives and the future of our planet are at stake.

At the end of the day, we know that BofA CEO Brian Moynihan heard our cries, and plowed on with business as usual. But as long as Bank of America continues to put our homes (both our houses and our planetary home) at risk, we’ll be there to meet them with people power.