We Know Who You Are: 71 Senators Reject States’ Right to Label GMOs 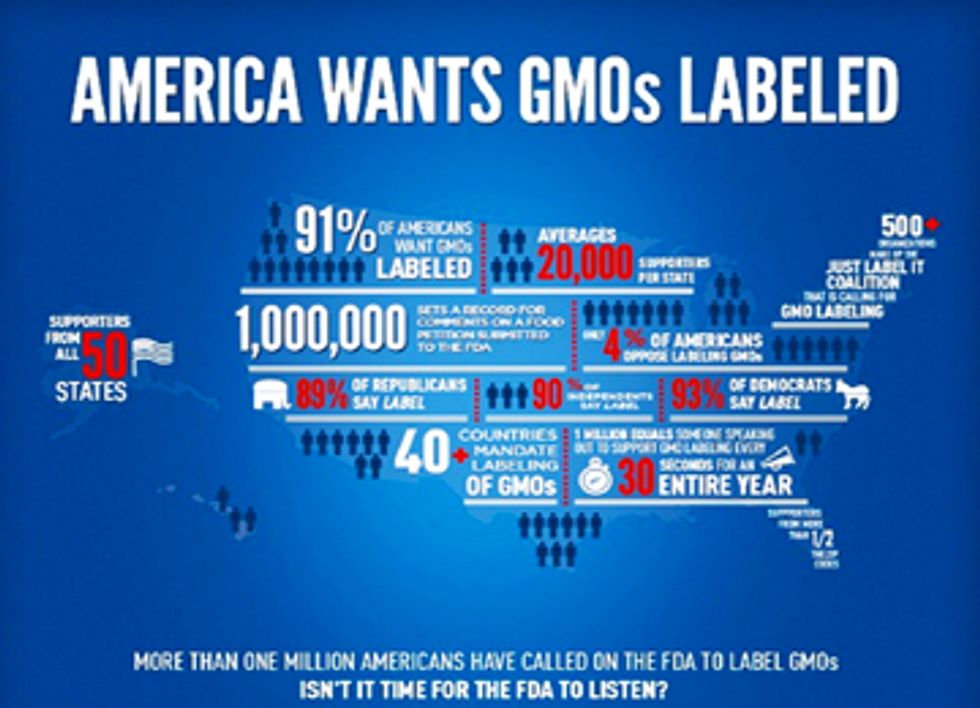 On the eve of a worldwide protest against Monsanto, 71 U.S. Senators—listed below—voted against an amendment to the Senate version of the 2013 Farm Bill that would have guaranteed states the right to enact mandatory genetically modified organism (GMO) labeling laws.

Seventy-one Senators voted against you, the 90 percent of consumers who have said  that you want labels on foods containing genetically engineered (GE) ingredients.

Seventy-one Senators—including 28 so-called liberal Democrats and 43 Republican so-called defenders of states’ rights—voted against your state’s Constitutional Tenth Amendment right to protect the health, safety and welfare of its citizens and local businesses.

We know who those Senators are. And we plan to make certain that everyone who cares about food safety and food sovereignty knows who they are, too.

We’ll make sure that every consumer, citizen and voter knows that last year Monsanto donated almost $6 million, more than any other company, to the agriculture lobby. And that almost $1 million of that money went directly to political candidates, including some of the 71 Senators who voted against states’ rights to label GMOs.

And we will make sure that every one of those Senators knows that if they support any amendment or rider to the Farm Bill that would preempt state labeling laws, that if they fight labeling laws in any of their home states, we’ll support efforts to recall them where possible, or oppose them if recall isn’t an option.

The Sanders Amendment: What and Why

In fact, states already have the right to enact mandatory GE labeling laws, just as they’ve passed nearly 200 other state laws governing food safety and agriculture. State GE labeling and other food safety and food labeling laws are guaranteed under the Constitution. Federal law, upheld for decades by federal court legal decisions, allows states to pass laws relating to food safety or food labels when the U.S. Food and Drug Administration (FDA) has no prior regulations or prohibitions in place. There is currently no federal law or FDA regulation on GE labeling, except for a guidance statement on voluntary labeling, nor is there any federal prohibition on state GE or other food safety labeling laws.

But with so many states, including Washington, Connecticut, Vermont, Maine and others threatening to actually pass GE labeling laws, the biotech industry is fighting back. Realizing that they can’t fight GE labeling laws in every state, they’re coming after states’ rights.

In Sen. Sanders’ home state, the GE labeling law, H. 112, passed the Vermont House May 13. The Vermont Senate will take up the bill in in January 2014. If the legislation is signed into law next year, Sen. Sanders anticipates a fight—one that his amendment might have averted.

Last year, when Vermont legislators signaled they might pass a GE labeling law, Monsanto threatened to sue the state, causing the Governor to back down. That’s when Sen. Sanders first introduced his amendment, to the Senate version of the 2012 Farm Bill, where it was quashed by a vote of 26 to 73, with this year’s vote as 27 to 71. The 2012 Farm Bill stalled before it could be finalized, while Congress was distracted by the national elections.

The Corporate Takeover of Local Decision-Making

Arguing against the Sanders Amendment, Sen. Debbie Stabenow (D-MI), the chair of the Agriculture Committee, said that the amendment “would interfere with the FDA’s science-based process to determine what food labeling is necessary for consumers.” Stabenow’s statement shows either her ignorance of, or dismissal of, the existing scientific evidence that GE food has been linked to everything from allergies to kidney failure to cancer.

But Sen. Stabenow’s real argument was one of efficiency.

“It’s also important to note that around the world now we are seeing genetically modified crops that have the ability to resist crop diseases and improve nutritional content and survive drought conditions in many developing countries ... We see wonderful work being done by foundations like the Gates Foundation and others, that are using new techniques to be able to feed hungry people.”

Let’s forget for a moment that Sen. Stabenow took in $739,926 in campaign contributions from Big Ag in 2012. Or that Bill Gates is a Monsanto shareholder. Or that there’s plenty of evidence refuting the claim that GE crops can solve world hunger, improve nutrition or survive drought. The focus on efficiency over health and safety, when we’re talking about our food, should be enough to set off alarm bells. Claiming efficiency, whether it’s a valid claim or not, as a reason to trample states’ rights to make their own decisions regarding food and agriculture, should have us thinking “slippery slope.”

What we have now is the McDonald’s of Democracy. It isn’t necessarily a rapid process, any more than our processed foods—with slaughterhouses, processing plants, intercontinental transportation routes and months in the freezer—are actually quick. But it’s fast in the sense that fast food is fast: It’s a centralized process based on the premise of efficiency, delivering a simple, easy-to-use product, but one that leaves citizens unnourished and unsatisfied. Like industrial agriculture, this "fast democracy" has encroached on our communities in a silent and invisible way. And Americans, with a deep stake in the quality of these decisions, know we are losing out.

It’s time for the 71 Senators who voted against the Sanders Amendment to start voting with the citizens who pay their salaries, not the lobbyists who fill their campaign coffers. If they don’t? It’s time for us to demand that they leave. And either vote or throw them out if they refuse.

The 71 Senators Who Voted Against Your Right to Know