We Have a Right to Know What's in Our Food! 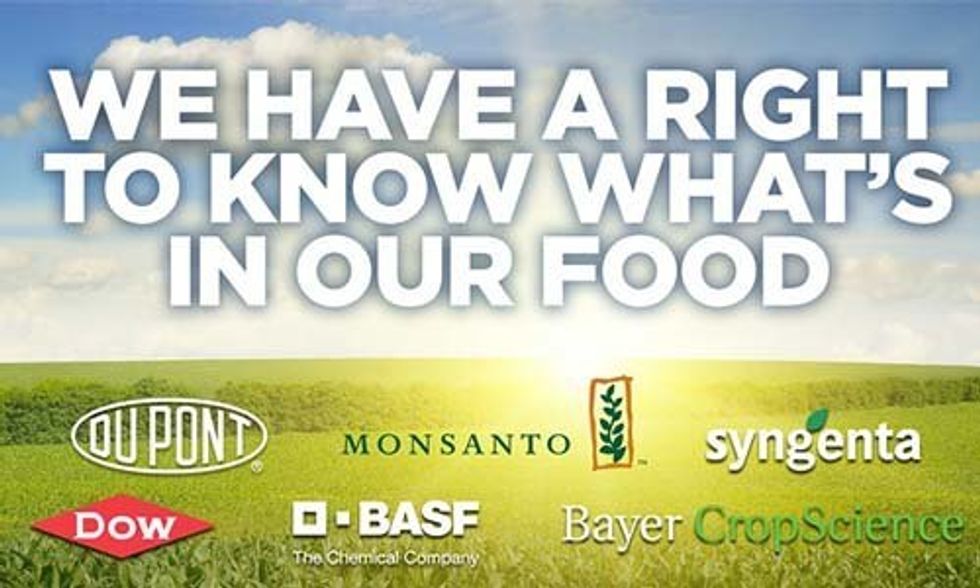 I just don't get it.

Over the more than 20 years I have worked as a business journalist, I've always been motivated by a simple premise: Knowledge is power and that power belongs with the public. The spread of information that people can use to make decisions—what to buy, what to eat, where to invest, etc.—helps support and promote the principles of freedom and democracy, I believe.

That's why the fear and loathing emanating from the food industry over the public's right to information about the food they consume is so hard for me to grasp.

As we kick off 2016 the leaders of many of the nation's largest and most powerful food companies are doubling down on their commitment to block mandatory labeling of foods made with genetically engineered crops or GMOs and they are seeking Agriculture Sec. Tom Vilsack's help to do so. The issue has become urgent for the industry as what would be the nation's first mandatory labeling measure is set to go into effect July 1 in Vermont. The industry has thus far failed to convince a federal court to block the law's implementation, though the fight could go to trial this spring.

Citizens in many other states continue to try to pass similar mandatory labeling measures. A GMO label would allow a consumer to know at a glance information that many consider important. Given that knowledge, some people might shy away from GMO-labeled foods; others may not care. Some may seek out GMO-labeled foods if they feel they provide special value or are helping “feed the world," as GMO seed developers such as Monsanto claim. But the public's right to that knowledge—to that decision-making ability—terrifies many in an industry that generates sales of roughly $2.1 trillion annually. The fear is so strong that they have enlisted teams of legal and public relations professionals to help try to convince regulators and federal lawmakers to override Vermont's law and prohibit any future laws like it.

The Grocery Manufacturers Association, whose members include PepsiCo., Kellogg Co. and hundreds of other large food companies, leads the charge against GMO labeling, saying it would be too costly to implement and is unnecessary because GMOs are proven safe. The organization says it is “hopeful that compromise will establish a uniform national standard for foods made with genetically engineered crops." The group recently put forth a proposed initiative that would add barcodes to products that consumers could scan with their smartphones to access information. But whether or not the presence of GMO ingredients would ever be required to be included in that information is unclear.

Those fighting for mandatory labeling include members of the organic and natural foods industry, but also consumer groups, environmentalists and lots of regular moms and dads who want to know what they are feeding their children. Many of these labeling supporters cite pesticide residues on GMO foods as a concern and contradictory science on the safety of GMOs. Some opponents say they don't want to buy products that they feel contribute to corporate control of the world's food supply. A barcode won't cut it, many of the leading GMO labeling proponents say. They point to a national survey conducted in November by the Mellman Group that concluded 88 percent of people want a printed GMO label rather than having to use a smartphone app to scan a bar code.

Agriculture Sec. Vilsack looks set to sit down with representatives from both sides of the issue in January to try to forge a compromise if one can be found. Both sides say they are willing to meet in the middle. Millions of dollars have been spent lobbying for and against labeling and fighting the issue out in the courts and both sides are weary of the war. Details of the discussions to be held are being kept confidential, according to some participants, to give the process the greatest chance of success.

As the discussions loom, we should not lose sight of the fact that this issue—and many others—come down to the power of information and the critical nature of who controls that information. Those companies developing and profiting from GMOs have the information they need to patent their creations and track where and how they are used. Farmers planting GMOs are provided a range of information about the seeds, their limitations and their benefits and can easily choose non-GMO seeds because varieties are labeled and tracked. Systems are in place to allow food manufacturers to know whether or not they are purchasing ingredients made from GMO crops. It seems consumers are the only ones left out of the information pipeline.

Indeed, some advocating against GMO labeling argue that consumers aren't smart enough to understand or use GMO labeling information effectively. They argue that consumers are being conned into fearing GMOs. In a Dec. 27, 2015 blog posting opposing GMO labeling, GMO supporters Jon Entine and retired University of Illinois professor Bruce Chassy wrote of consumers “who can't define what a GMO is" and said that pro-labeling efforts are driven by “small groups of well-financed professional activists." Chassy and Entine argue that these “activists" use “misinformation and fear-mongering to whip up support for their agenda."

Such pro-GMO advocates may hope consumers also are not well informed about their connections to the corporate food industry. Chassy doesn't mention in that blog, for instance, that for years while working as a professor of food safety at the University of Illinois, he collaborated quietly with Monsanto executives on multiple projects aimed at countering concerns about health and environmental impacts of GMOs. Monsanto has acknowledged that it provided several unrestricted grants to the biotechnology outreach program that Chassy helped lead, but said there was nothing improper about the relationship.

That is information some might want to know. But it only became public after the non-profit group U.S. Right to Know obtained emails between Chassy and several other university professors and Monsanto and shared them with media outlets.

Another batch of emails recently disclosed shows discussions between Kevin Folta, chairman of the horticultural sciences department at the University of Florida and a public relations agency about how to counter a Canadian teenager who developed a website questioning the safety of genetically modified foods. Folta also received grant money from Monsanto.

I don't know about you, but this is all information I think is important. Knowing what goes on behind the scenes helps me make decisions about who I trust and what I believe about the food I buy for myself and my family. As a journalist I've been fortunate enough to get behind those scenes a time or two myself: I've toured Monsanto's laboratories, visited Dow AgroSciences' test plots; and spent more time than I can calculate with farmers in their fields. I've also spent countless hours with scientists on both sides of this debate; waded through stacks of legal and regulatory documents; and sat down with government regulators to talk over the myriad issues.

The knowledge I have gained leaves me straddling the fence a bit. I see benefits to GMOs and I see risks. And I know with certainty that I want more information, not less.

Whatever one's views are about GMOs or other aspects of the food industry, the right to information is essential and not one to be abridged.

Carey Gillam has been recognized as one of the top food and agriculture journalists in the U.S., winning several awards for her coverage of the industry and appearing as an expert commentator on radio and television broadcasts. After a 17-year career at Reuters, one of the world's largest news organizations, Gillam joined U.S. Right to Know as research director on at the beginning of this year.