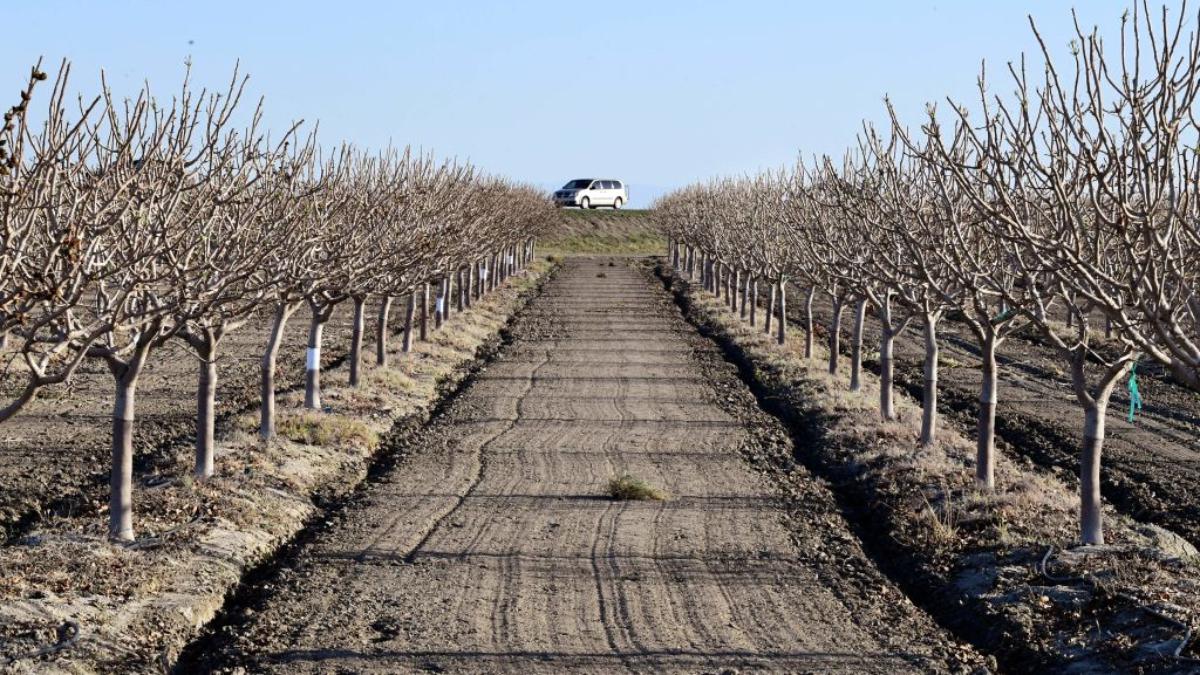 By Debra Perrone and Scott Jasechko

As the drought outlook for the Western U.S. becomes increasingly bleak, attention is turning once again to groundwater – literally, water stored in the ground. It is Earth’s most widespread and reliable source of fresh water, but it’s not limitless.

Wells that people drill to access groundwater supply nearly half the water used for irrigated agriculture in the U.S. and provide over 100 million Americans with drinking water. Unfortunately, pervasive pumping is causing groundwater levels to decline in some areas, including much of California’s San Joaquin Valley and Kansas’ High Plains.

We are a water resources engineer with training in water law and a water scientist and large-data analyst. In a recent study, we mapped the locations and depths of wells in 40 countries around the world and found that millions of wells could run dry if groundwater levels decline by only a few meters. While solutions vary from place to place, we believe that what’s most important for protecting wells from running dry is managing groundwater sustainably – especially in nations like the U.S. that use a lot of it. 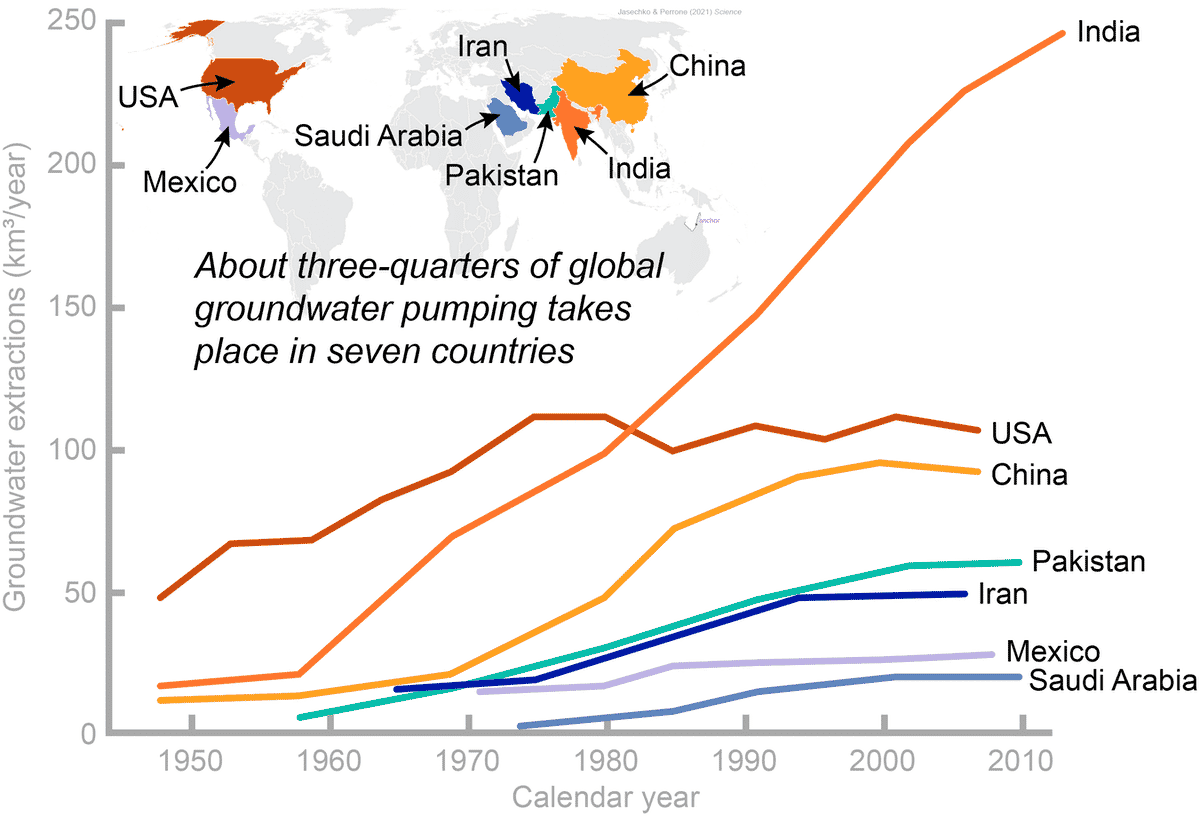 The U.S. has one of the highest national groundwater use rates in the world. Jasechko and Perrone, 2021,

Groundwater flows through tiny spaces within sediments and their underlying bedrock. At some points, called discharge areas, groundwater rises to the surface, moving into lakes, rivers and streams. At other points, known as recharge areas, water percolates deep into the ground, either through precipitation or leakage from rivers, lakes and streams. 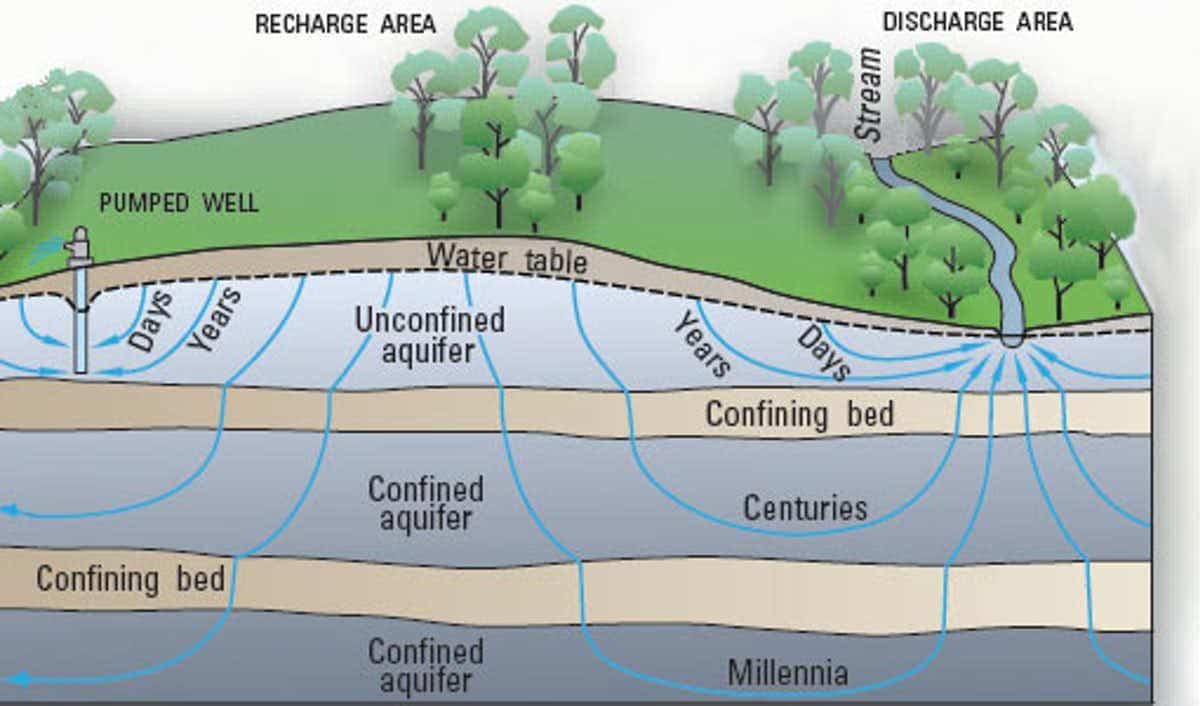 Groundwater can remain underground for days to millennia, depending on how deep it sinks, how readily it moves through rock around it and how fast humans pump it to the surface.

Groundwater declines can have many undesirable consequences. Land surfaces sink as underground clay layers are compacted. Seawater intrusion can contaminate groundwater reserves and make them too salty to use without energy-intensive treatment. River water can leak down to underground aquifers, leaving less water available at the surface.

Groundwater depletion can also cause wells to run dry when the top surface of the groundwater – known as the water table – drops so far that the well isn’t deep enough to reach it, leaving the well literally high and dry. Yet until recently, little was known about how vulnerable global wells are to running dry because of declining groundwater levels.

There is no global database of wells, so over six years we compiled 134 unique well construction databases spanning 40 different countries. In total, we analyzed nearly 39 million well construction records, including each well’s location, the reason it was constructed and its depth.

Our results show that wells are vital to human livelihoods – and recording well depths helped us see how vulnerable wells are to running dry.

Millions of Wells at Risk

Our analysis led to two main findings. First, up to 20% of wells around the world extend no more than 16 feet (5 meters) below the water table. That means these wells will run dry if groundwater levels decline by just a few feet.

Wells are already going dry in some locations, including parts of the U.S. West. In previous studies we estimated that as many as 1 in 30 wells were running dry in the western U.S., and as many as 1 in 5 in some areas in the southern portion of California’s Central Valley.

Households already are running out of well water in the Central Valley and southeastern Arizona. Beyond the Southwest, wells have been running dry in states as diverse as Maine, Illinois and Oregon.

What to Do When the Well Gives Out

How can households adapt when their well runs dry? Here are five strategies, all of which have drawbacks.

– Dig a new, deeper well. This is an option only if fresh groundwater exists at deeper depths. In many aquifers deeper groundwater tends to be more saline than shallower groundwater, so deeper drilling is no more than a stopgap solution. And since new wells are expensive, this approach favors wealthier groundwater users and raises equity concerns.

– Sell the property. This is often considered if constructing a new well is unaffordable. Drilling a new household well in the U.S. Southwest can cost tens of thousands of dollars. But selling a property that lacks access to a reliable and convenient water supply can be challenging.

– Divert or haul water from alternative sources, such as nearby rivers or lakes. This approach is feasible only if surface water resources are not already reserved for other users or too far away. Even if nearby surface waters are available, treating their quality to make them safe to drink can be harder than treating well water.

– Reduce water use to slow or stop groundwater level declines. This could mean switching to crops that are less water-intensive, or adopting irrigation systems that reduce water losses. Such approaches may reduce farmers’ profits or require upfront investments in new technologies.

– Limit or abandon activities that require lots of water, such as irrigation. This strategy can be challenging if irrigated land provides higher crop yields than unirrigated land. Recent research suggests that some land in the central U.S. is not suitable for unirrigated “dryland” farming.

Households and communities can take proactive steps to protect wells from running dry. For example, one of us is working closely with Rebecca Nelson of Melbourne Law School in Australia to map groundwater withdrawal permitting – the process of seeking permission to withdraw groundwater – across the U.S. West.

State and local agencies can distribute groundwater permits in ways that help stabilize falling groundwater levels over the long run, or in ways that prioritize certain water users. Enacting and enforcing policies designed to limit groundwater depletion can help protect wells from running dry. While it can be difficult to limit use of a resource as essential as water, we believe that in most cases, simply drilling deeper is not a sustainable path forward.

Debra Perrone is an assistant professor of environmental studies at the University of California Santa Barbara.

Scott Jasechko is an assistant Professor of water resources at the University of California Santa Barbara.