Water Wars of the 21st Century 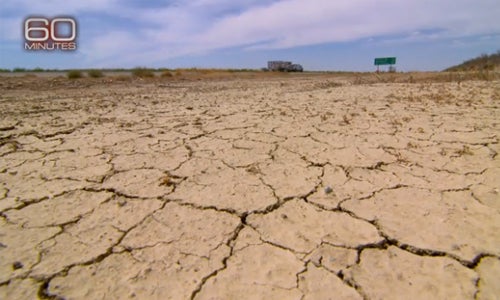 “Its been said that the wars of the 21st century may well be fought over water. The Earth’s population has more than doubled over the last a 50 years and the demand for fresh water—to drink and to grow food—has surged along with it. But sources of water like rainfall, rivers, streams, reservoirs certainly haven’t doubled. So where is all that extra water coming from? More and more it’s being pumped out of the ground. Water experts say groundwater is like a savings account, something you draw on in times of need. But savings accounts need to be replenished and there is new evidence that so much water is being taken out much of the world is in danger of a groundwater overdraft,” said Lesley Stahl in introducing last night’s segment, Depleting the Water, on 60 Minutes.

Watch as Stahl discusses California’s record-breaking drought and visits California’s Central Valley where corn, almonds, pomegranates, tomatoes and grapes all need water to grow. She talks with many experts, including Mike Watkins who is head of the Science Division at NASA and project scientist for GRACE, Jay Famiglietti who is a leading expert on groundwater and Earth sciences professor at the University of California, Irvine, and Claudia Faunt who is a hydrologist for the U.S. Geological Survey.