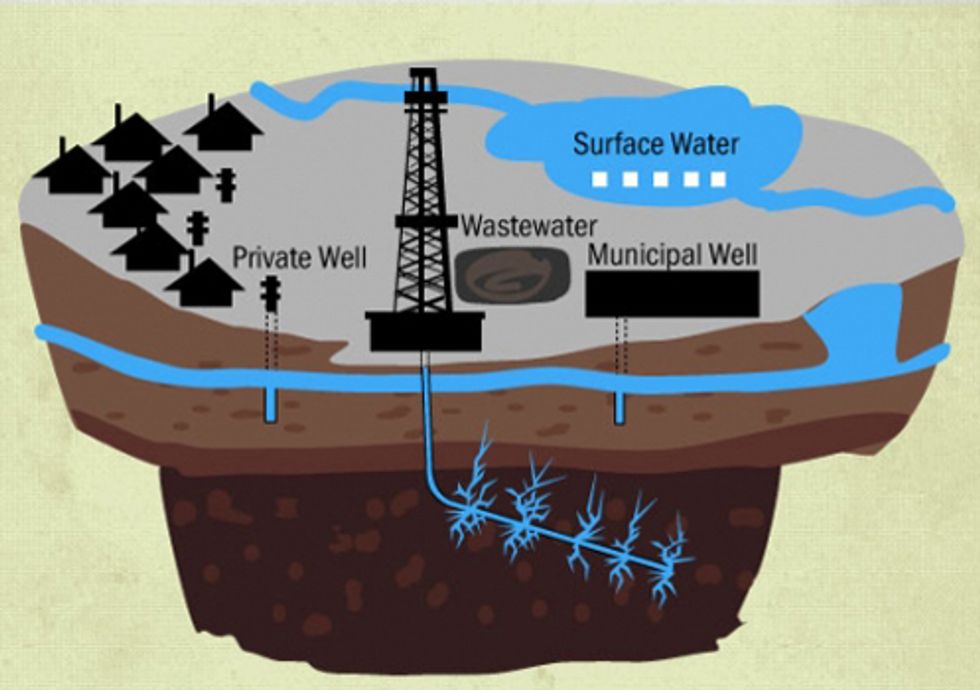 Do you know where North America’s largest shale-gas hydraulic fracturing (fracking) operations are? Texas, Wyoming or Pennsylvania? No. It’s Canada’s Horn River Shale Formation, located in northeastern British Columbia. Performing that frack job is oil and gas production giant Apache Corporation, which lauded its own immense size and scale: “When all was said and done, the completions team performed 274 successful fracs on the 16-well pad, using 50,000 tons of sand and 980,000 cubic meters of water.” (That’s over 250 million gallons of water.)

Apache and its partner, Encana, made sure to “celebrate” this achievement of oil and gas engineering within the company, while touting its prowess throughout the industry and the Canadian government.

But Apache representatives were sedate during an October 2011 hearing before the U.S. Senate Committee on Energy and Natural Resources’ Subcommittee on Water and Power. During the hearing, Apache executive Dr. Cal Cooper showed greater interest in the more typical fracking operations that take place in the U.S.—ones that are much smaller than in the Canadian super-frack job.

What explains Apache’s change in tune before the U.S. Senate panel? In a word: water.

Water is the main ingredient in fracking fluid, comprising more than 99 percent of the total with the remainder a mix of undisclosed, proprietary chemicals. The quantity of water required for a typical frack job is around 4.5 million gallons, of which a substantial amount—approximately 10 to 40 percent—“flows back” to the surface as toxic wastewater. That’s right, 4.5 million gallons are pumped into the ground and up to a million gallons of toxic water flow back up (or the amount of contaminated water equal to the annual water use of up to seven households).

With so much water involved in fracking, it makes sense that the American public is apprehensive. National polls show that ensuring adequate supplies of clean freshwater is an overwhelming environmental concern. No wonder the oil and gas industry is sensitive about fracking’s water use and have sought to downplay the importance of water by essentially saying, “Don’t worry, it’s not really that much.” But such niceties don’t satisfy critics, so industry has to find ways to justify its heavy water use.

One of the industry’s most common strategies is to emphasize how fracking water use is some fraction of the one percent slice of the “mining, oil and gas” industries’ compared to dominant American water withdrawers like thermoelectric power plants, agriculture and public water supplies. Another common justification is what gas giant Chesapeake Energy does by taking the 4.5 million gallon figure and comparing it to other water use examples. For example, drawing comparisons to the amount of water needed to supply New York City for seven minutes or irrigate 7.5 acres of corn in a season.

But such standard comparisons between fracking and other water uses must be drying up because Apache’s Cooper offered a new, more sophisticated line of argument in his testimony:

…[I]t seems especially pertinent for this committee to consider the water budget of energy from shale gas compared with other sources…Natural gas, from both shale gas and conventional reservoirs requires less water per MMBtu of energy generated from combustion than any other common fuel. (PDF)

Hmm. Water requirements per heat energy unit (MMBtu)? Fuel-type comparisons? Cooper’s favorable argument for shale gas is compelling because in such a life cycle analysis—where the entire process is assessed from extraction to power plant combustion—water requirements are lower in comparison to certain fuel types. In addition, the popularity of natural gas relies, in part, on its reputation as a “bridge fuel”—the fossil fuel that will lead to a renewable energy future because it’s cleaner burning, emits less greenhouse gas and uses water less intensively in certain steps of the process. However, substantial debate exists about its presumed life cycle environmental benefits. Cooper conveniently avoids real and legitimate water resource impacts associated with fracking, as summarized in the list below:

The local dimension of water undermines industry’s water use claims

Cooper openly acknowledges that “[w]ater is a local resource and withdrawal must be managed on a local basis to ensure that the ecological health of riparian systems and the needs of other major users are met.” He notes the historically severe drought in Texas and Oklahoma, where oil and gas companies had to adjust their fracking methods because of decreased water availability and competition with other users, like farmers. This is a constant concern throughout arid western states with active shale gas plays, like Colorado and Wyoming.

If a well site has inadequate water resources, a fairly common problem, water has to be transported via tanker trucks to fill impoundments over the course of hundreds or thousands of visits. Finally, there is the thorny issue of toxic fracking wastewater and its storage, reuse and disposal.

Local differences can explain, in part, the differences between how Apache represented itself regarding the Canadian super-frack operations versus the restrained tone of Dr. Cooper’s testimony before the Senate panel. The Horn River Shale is located in a remote section of British Columbia, far from any population centers. Additionally, the enormous volume of water used for the super-fracking was done with brackish water unsuitable for drinking, and wasn’t a direct draw on freshwater supplies.

On the other hand, fracking in the U.S., especially in the Marcellus Shale region, tends to occur in more densely populated areas where it can come into conflict with local water uses like drinking and irrigation. As fracking spurs the proliferation of natural gas wells around the U.S., water-related issues will continue to impact water quantity and quality for both ground and surface water. These local impacts are where the true fault lines lie in the struggle over fracking.

The debate over whether the millions of gallons used for a frack job is outsized might be appropriate within a larger discussion of national water use. But the discussion about water resource impacts of fracking must be a local one. In changing the unit of analysis from the water needed for drilling and fracking at the well site to a more general “water for fuel-type,” Cooper’s argument bypasses localized impacts, where they are felt most intensely and where water use is amplified. Wherever you go, 4.5 million gallons is a lot of water, particularly if in your backyard. That’s a fact that doesn’t change no matter how the industry attempts to minimize it.