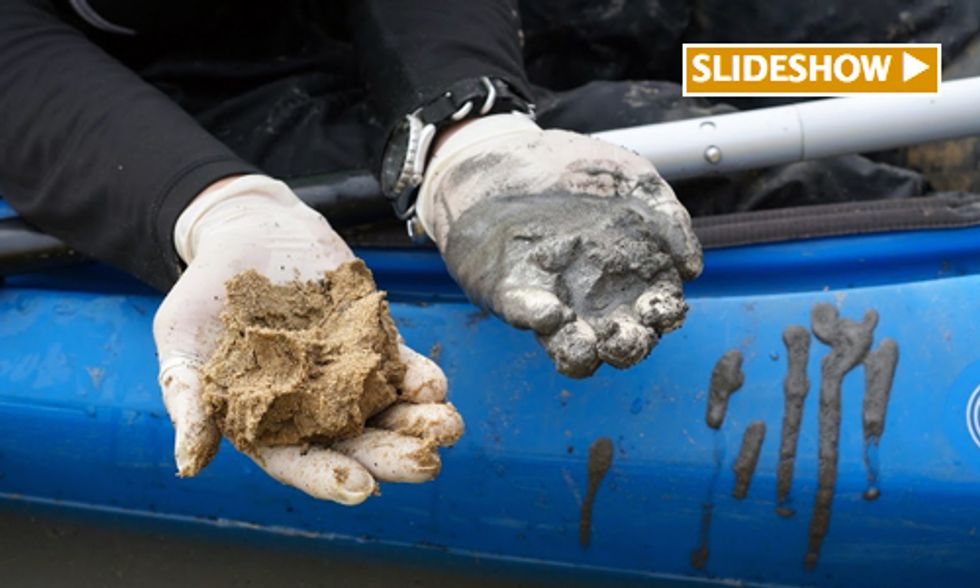 [This is the third article in a four-part series. Read part one, read part two, read part four.]

Today Waterkeeper Alliance and Yadkin Riverkeeper issued the results of water sampling from the Dan River in the wake of the third largest coal ash spill in U.S. history. A certified laboratory analysis of Waterkeeper’s samples, completed today, reveals that the water immediately downstream of Duke Energy’s ash spill is contaminated with extremely high levels of arsenic, chromium, iron, lead and other toxic metals typically found in coal ash.

Late Monday afternoon Duke Energy reported that it spilled an estimated 50,000 to 82,000 tons of coal ash mixed with 27 million gallons of water into the Dan River near Eden, North Carolina, although Duke has not updated the initial spill estimates despite ongoing discharges for the last four days. Several groups have also criticized the state regulators for failing to alert the public of a massive toxic waste release into a drinking water source for at least 24 hours after they claim to have become aware of the spill.

On Feb. 4, Waterkeeper Alliance took water samples from a stretch of the Dan River downstream of the spill located between Eden, North Carolina and Danville, Virginia. [See the map of samples here.]

Coal ash is a waste product from coal combustion and presents a serious threat to aquatic ecosystems and drinking water because it contains heavy metals and other toxic compounds. Laboratory results of Waterkeeper’s samples, also show that, compared to the levels found in a “background” water sample taken upstream of the spill, arsenic levels immediately downstream of the spill are nearly 30 times higher, chromium levels are more than 27 times higher, and lead levels are more than 13 times higher because of Duke Energy’s coal ash waste.

Waterkeeper’s testing found an arsenic concentration in the polluted water immediately below the discharge of .349 mg/L. Arsenic is a toxic metal commonly found in coal ash and is lethal in high concentrations. The .349 mg/L concentration found in Waterkeeper’s sample is greater than Environmental Protection Agency’s (EPA) water quality criterion for protection of fish and wildlife from acute risks of injury or death. It is more than twice as high as EPA’s chronic exposure criterion for fish and wildlife, and is almost 35 times greater than the maximum contaminant level (MCL) standard that EPA considers acceptable in drinking water.

Waterkeeper Alliance also found a lead concentration in the polluted water of 0.129 mg/L. Lead is another metal commonly found in toxic coal ash. Lead poisoning can cause developmental delays and permanent damage in exposed infants and children, as well as kidney damage and high blood pressure in adults. In very high doses, lead poisoning can cause death. According to the Occupational Safety and Health Administration, lead poisoning in the blood causes damage to many systems in the human body, and that damage can arise after periods of exposure as short as days if the level of exposure is acute. The 0.129 mg/L concentration found immediately downstream of Duke Energy’s coal ash spill is more than double the EPA’s water quality criterion for protection of fish and wildlife from acute risks of injury or death. It is about 50 times greater than EPA's chronic exposure criterion for fish and wildlife, and more than 1,000 times greater than EPA's recommended action level to prevent contamination of drinking water.

Levels of other contaminants found in the sampling just below the discharge include: Manganese: .576 mg/L; Boron: .314 mg/L; Calcium: 34.7 mg/L; Zinc: .224 mg/L; and Iron: 84.6 mg/L. Even more troubling is that heavy metals released by Duke Energy are toxic and bio-accumulative. They will stay in the river, in its sediment, and in the bodies of fish and other animals for a long time to come.

“Duke could have avoided contaminating the Dan River and poisoning Virginia's water supplies if it had removed its toxic ash heaps years ago after being warned by EPA,” said Robert F. Kennedy, Jr., president of Waterkeeper Alliance.

“On Tuesday when I collected these samples, coal ash continued to spill out of the pipe into the Dan River,” said Donna Lisenby, Global Coal Campaign coordinator for Waterkeeper Alliance.

“Our sample crew on the Dan River today reports that there is still coal ash waste leaking out of the pipe. Waterkeeper Alliance is very concerned that there was a delay in the release of sample results from Duke Energy. They were aware of the spill and collected samples long before we did. Their failure to provide accurate, timely information to the public about the high levels of heavy metals contaminating the Dan River for days is extremely irresponsible.”

After Waterkeepers initiated enforcement actions for illegal coal ash water pollution at two Duke Energy coal plants in North Carolina last year, the state filed lawsuits accusing Duke of illegal pollution discharges from leaks in its coal ash ponds at all 14 of its coal-fired power plants in the state of North Carolina. This includes Duke’s plant on the Dan River, where the state accused Duke of engineering an illegal discharge point to channel contamination leaking out of the ash pond into the river without authorization. A 2009 EPA study labeled Duke’s 53-year old Dan River ash pond dams “significant hazard potential structures.” Field inspections found the dams leaking and their surfaces sliding.

Duke stopped generating electricity at the coal plant in 2012, however the ash remains impounded at the site. While utilities in South Carolina have settled Waterkeeper lawsuits and started cleaning up their leaking ash ponds, Duke has thus far refused to responsibly address their ongoing contamination of public water supplies.

See additional images in this slideshow: