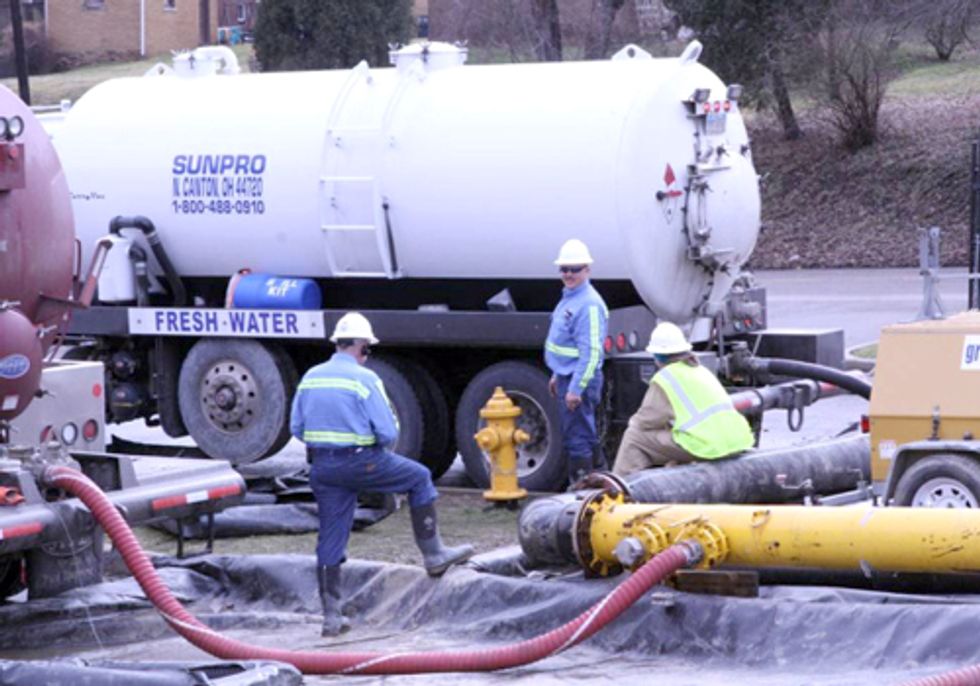 The Muskingum Water Conservancy District (MWCD) announced today that it is halting water sales to the oil and gas industry pending the completion of a U.S. Geological Survey water availability study and the revision of its water supply policy.

The MWCD cited concerns presented by members of the public and environmental groups as reason for the announcement.

The MWCD's announcement follows a June 2 rally and protest on the steps of the Tuscarawas County Courthouse in New Philadelphia, Ohio. At the rally led by the Southeast Alliance to Save Our Water and the Buckeye Forest Council, concerned citizens came out in force to protest a potential decision by the MWCD to sell millions of gallons of public water to fracking operations.

The rally coincided with the annual meeting of the MWCD's Conservancy Court, a panel of 18 judges (one from each county in the district) whose mission includes reviewing and approving or denying proposed District water sales.

“I would like to extend our sincere gratitude to the MWCD for listening to our serious concerns and for being willing to allow more public input,” said Lea Harper. “I believe this is also another good sign that progress can be made for the sake of public benefit and the long-term preservation of precious natural resources if people continue to rally together and collaborate on this important issue of unconventional shale drilling and massive water withdrawals. We at Southeast Ohio Alliance to Save Our Water will continue to do our own analysis of large water withdrawals and their potential impacts in the state. We will await the results of the proposed changes to policy and go from there. This is certainly a good day in the Muskingum Watershed.”

Harper added, “I would also like to say that we don't think this would have happened without the support of individuals traveling from all over the state to attend the rally last Saturday, and the environmental organizations who were there, too.”

“We are glad the Conservancy District listened to the concerns of the public in making its decision to suspend water sales to fracking operations,” said Johnson. “We hope the district will include the public as they consider and formulate a new water sales policy. The sale of millions to potentially billions of gallons from the district to fracking operations could result in a host of serious environmental impacts. All of these impacts demand close study before a new water policy is approved."